‘It was just coming right at me,” man says of water rushing into his basement during storm 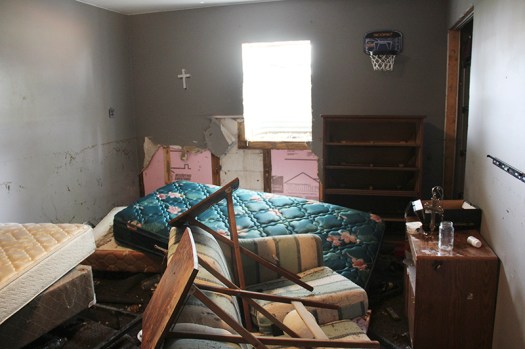 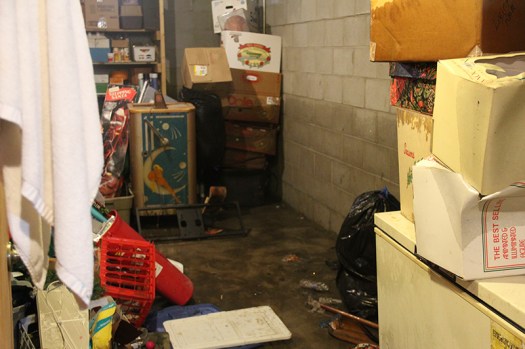 Water reached an estimated 3 1/2 feet in this home at 224 E. Main St. in Alden during heavy rains on Tuesday. Sarah Stultz/Albert Lea Tribune 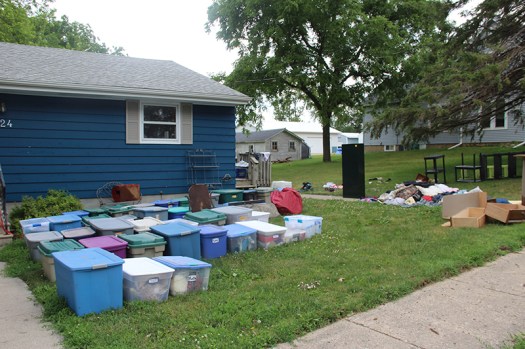 Items retrieved from a flooded basement at 224 E. Main St. in Alden are laid out on the lawn Wednesday afternoon. Sarah Stultz/Albert Lea Tribune 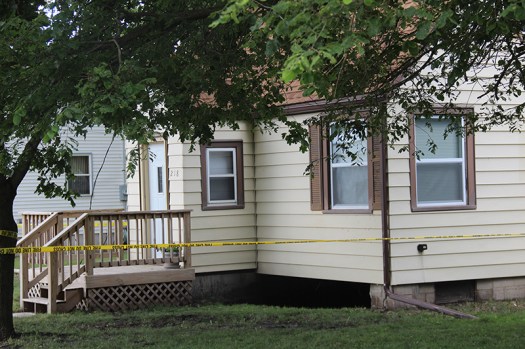 The neighboring house had part of its foundation cave in during heavy rains Tuesday night. Sarah Stultz/Albert Lea Tribune

Dan Hensche of Alden prepared for high winds and a possible power outage Tuesday night, but he never anticipated there would be more from the storm that swept through the area.

He filled up his gas can to have in case he needed it for his generator and was expecting a quick and heavy downpour — but that was it.

“I wasn’t really expecting a flood,” he said.

But as the rain fell, his stepfather, Ron Reshetar, who was upstairs, mentioned how much water there was outside. Hensche said he was checking it out when he heard his son call up to him from downstairs and tell him that water was trickling in an egress window in the basement bedroom.

“I pulled the curtain open, saw the trickle, and he was going to just hand me a towel to put down in the windowsill and then the entire window just came in,” Hensche said.

He said he tried to push the window back in as water poured in the room.

“It was just coming right at me,” he said.

Hensche said he realized at that point, there was nothing he could do and let the window go.

He and his family worked quickly to salvage anything they could from the basement rooms but many of the items were a loss, including furniture, mattresses, appliances and other items.

The basement housed a living room space, a bedroom for his boys, a kitchenette, a bathroom, a laundry area and a storage area.

His neighbor to the west suffered foundation damage, and one of the basement walls caved in.

The woman, who had recently purchased the house, was evacuated from the home with the help of Alden firefighters. Firefighters also helped pump out the yard and both basements, Hensche said.

Hensche said his parents, who have lived in the house for seven years, had previously had some water in the basement here and there but nothing severe.

While he had renter’s insurance, he did not have flood insurance, and therefore none of the loss is covered.

He has some friends who have committed to helping getting the space cleared so it can be cleaned and bleached.

And his girlfriend has started a GoFundMe page to raise funds to go toward replacing furniture, appliances, household items and clothing that were damaged.

“I just really appreciate the support and people helping,” he said. “You don’t realize how much you had until it’s all wrecked.”

Reports indicate about 5 to 6 inches of rain fell on the Albert Lea area.

Freeborn County Emergency Management Director Rich Hall said he is still conducting damage estimates throughout the county, but noted that public infrastructure did not seem to be too affected from the storm. Crews were inspecting bridges Wednesday.

The Salvation Army in Albert Lea is handing out cleanup kits for people with flooded basements, and the American Red Cross was also getting involved.

The majority of the water on flooded roadways had receded by Wednesday morning.