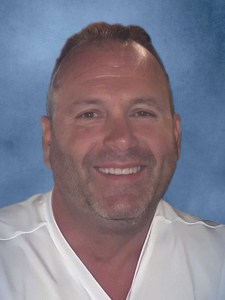 Burial will be in Rose Hill Cemetery in Thompson.

Kerby Jay Lodin was born on April 28, 1966 in Forest City, Iowa to parents Lawrence E. and Judy (Kallestad) Lodin. He was baptized and confirmed at Bethany Lutheran Church in Thompson, Iowa. He graduated from Thompson High School in 1984 and went on to attend NIACC in Mason City.

Kerby worked at the Farm Service Agency in Thompson for several years, and later at several auto dealerships, the most recent being Dave Syverson’s in Albert Lea.

He married Ellen Iverson in 2001 and was so proud of his daughter Madison Marie whom he adored.

On June 20, 2015, Kerby was united in marriage with Robyn (Madson) Aldrich in Albert Lea, MN. They made their home in rural Albert Lea.

When not working, Kerby could be easily found: he was the one boating wearing neon swim trunks, or watching the Andy Griffith Show re-runs, or possibly mowing his lawn to perfection. He was proud of his John Deere farm equipment display, as well as his ability to sing Karaoke- Jenny (867-5309) was his song. No man should have as many pairs of cargo shorts as Kerby did. He had cargo shorts for all occasions, ones with holes, some with paint, and some good ones for wearing out. Coordinate the cargo shorts with a white tshirt and flip-flops, and he was ready to face the day.

Kerby will be greatly missed!