Milo James Sather, 95, passed away peacefully at home on June 29, 2022. He was born to Juel and Gena Sather on May 12, 1927, in Freeborn County, Minnesota, where he grew up on a dairy farm. Milo attended Round Prairie Lutheran Church. After graduating from Albert Lea High School in 1944, he enlisted in the Naval Reserve. Being the only person in Freeborn County to pass the Eddy Test for electronics aptitude, he qualified to attend radio school. When the war ended, Milo continued his education, graduating from the University of Minnesota with a degree in Electrical Engineering. While there, he met his wife Dorothy. They lived in Minnesota, Illinois, and Canada, before settling in Los Angeles, raising four children in the wonderful community of Westchester. 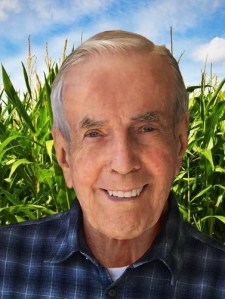 Milo worked for Hughes Aircraft in the Radar Systems Group, retiring after 35 years. He then went on to volunteer with Travelers Aid at LAX, do seasonal tax work for H & R Block as an enrolled agent, and compose his life story in a weekly writing class.

Milo was a devoted father and family man, taking the family on many camping, skiing, and fishing trips. He rarely missed a sporting event or concert when one of his children was participating.

Milo loved nature and the outdoors. He was an avid skier, hiker, and runner. From age 52 to 79, he ran over 1,100 distance races, completing his last marathon just before his 75th birthday. He liked the Cincinnati Reds and the Minnesota Vikings. He liked sardines, pickled herring, and an occasional beer. He liked getting up early in the morning. If you offered him the choice of several desserts he would say, “A little bit of each.” And, of course, after he finished that, he would want “a little bit more.” Another favorite expression was, “Leave your campsite better than you found it,” and he did.

A service will be held on Sunday, July 31, 1:00 PM, at the Congregational Church of the Messiah, 7300 W Manchester Ave, Los Angeles.