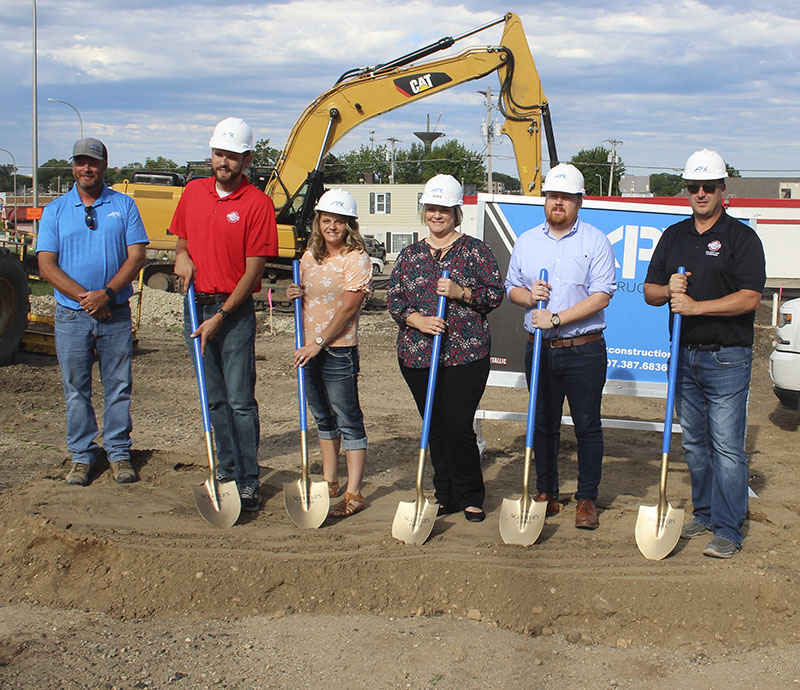 With the sun shining and temperatures in the low 70s, the weather Friday morning was ideal for the groundbreaking of the new Scooter’s Coffee location, which will be at 810 Marshall St.

“Rob and I would like to thank the city of Albert Lea, APX and we’d like to thank all of the Scooter’s support staff down in Omaha because without them this really wouldn’t have been able to happen,” said Chris Plasek, franchise co-owner for the future Scooter’s.

“We wanted to at least get it out to the public that Scooter’s is coming,” said Rob McGregor, franchise co-owner. “These Scooter’s buildings, they don’t take long to build.”

In his opening remarks before the groundbreaking, Plasek said that by doing this he and McGregor wanted to help their families grow.

“Scooter’s Coffee really believes in their core values of integrity, courage, love and humility,” he said. “And everything we do really embodies that.”

McGregor described Scooter’s as “much more” than a coffee shop, and said the store would sell smoothies, Red Bull, fusion drinks, teas and have an all-day food menu. By offering the larger variety, he said the company was able to serve a variety of age groups.

Above all, he stressed the necessity for speed.

“Fast and friendly, whether that’s two cars in line or 22 cars in line, they don’t want you waiting there very long,” he said. “They’re going to get you in and out very, very fast.”

As for Albert Lea, he said the company thought there needed to be one and said the population was perfect for a location.

“We thought that area on Main Street, heading down towards that McDonald’s there, was needing something like this,” he said. “Especially with all the walkways down there and everything that’s going on down there.”

McGregor said Scooter’s business model was drive-thru centered, and the new one will be drive-thru only.

“A lot of restaurants are going that route,” he said. “It’s easier to staff, it’s kind of something you can get in the drive-thru, get out and get on to work or get on with your day.”

According to McGregor, their goal is to have the new store operational in September, with plans to open going back 1 1/2 years. McGregor estimated there were currently around 450 stores nationwide and estimated there were less than 10 in Minnesota, but the goal of the company (headquartered in Omaha) is expansion.

“They’re rapidly expanding up and through Minnesota here,” he said.

The new store will provide “around 20” new jobs, and he said the new store was a great opportunity for anyone to work a shift.

What separated Scooter’s Coffee from Starbucks or Caribou Coffee, according to McGregor, was speed.

“They really do pride themselves on getting you through the line fast,” he said. “Their goal is to have you, from the menu board to past where you get your drink, in three minutes or less.”

He also wants to get to know people and the community, and said eventually employees will start using first names.

McGregor said Scooter’s Coffee also had an app, something that allows customers to pre-order for pickup.

Phillip Johnson, executive director of the Albert Lea Economic Development Agency, described the event as a “continuation of momentum” and getting more and new businesses in the community.