Shirley Jeanette Chase, age 100, passed away on April 2, 2022, in Albert Lea, Minnesota. Born August 9, 1921, on her aunt’s farm near Ellendale, Minnesota, Shirley, a 100% Dane and proud of it, was the only child of Alice Victoria (Larsen) and Irvin Andersen (Charley Irvin Andersen). After her father died in a construction accident in 1927, Shirley and her mother moved from St. Paul to Clarks Grove, Minnesota. As a ten-year-old, Shirley began playing the piano for Clarks Grove Baptist Church Sunday School. 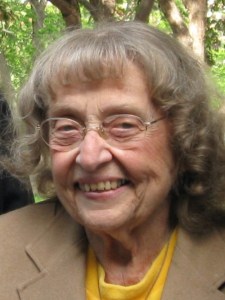 Graduating from Albert Lea High School in 1938, Shirley attended Albert Lea Junior College for one year before continuing her education at Hamilton School of Commerce, Mason City, Iowa, from which she graduated in 1940. After graduation, Shirley and her mother moved to Albert Lea, where Shirley was hired by the Chamber of Commerce to work on the first “Colonel Albert Lea Days.” Shirley went on to serve as a secretary for the Interstate Power Company, a bill clerk at the Rock Island Railroad freight office, a secretary for District 241 Schools, and a salesperson (along with Van) at Wedge Nursery.

Shirley met Van Chase in 1939. After Van returned from serving in the European Theater of Operations in WWII, the two were married on September 6, 1947, at First Baptist Church in Albert Lea. Their family grew when daughters Mary and Nancy were born in 1949 and 1952, respectively. Having moved to their newly built home in 1952, Shirley and Van started what grew into a years-long tradition of raising prolific flowers, fruits and vegetables. Their canning process became so successful that Van built a “fruit room” in their basement to accommodate the hundreds of jars of produce that they put up each fall. Shirley looked forward to many a family vacation in the Duluth and Lake Superior North Shore area where, if the opportunity presented itself, she would gladly wet a line. The Minnesota State Fair was also one of Shirley’s favorite destinations. Throughout their marriage, Shirley and Van enjoyed a variety of music related events—the likes of drum and bugle corps and marching band performances—and for decades, Shirley loyally attended Albert Lea’s Civic Music concerts.

Shirley served as organist at First Baptist Church in Albert Lea from 1942 to 2010, playing part-time the following three years. She was very involved with First Baptist’s Christmas music and special programs, served as a deacon, was dedicated to her church circle (chaired at one point) and attended adult Bible Study.

Outside of her church commitments, Shirley researched and compiled an extensive Larsen/Larson family history book, publishing it in 1982. In addition, she coordinated the annual extended family picnic (part of which involved collecting and dispersing family updates) for many years. Shirley was a decades-long organizer on the Albert Lea High School Class of 1938 reunion committee. She also served as an election judge for the City of Albert Lea, was involved in the Freeborn County Historical Society and was active in the local Wa-Tan-Ye Club. A talented seamstress, knitter and furniture refinisher, there were no boundaries as to what Shirley could accomplish when she set her heart to it.

Shirley was a die-hard Minnesota Twins fan. Baseball game broadcasts on WCCO resounded throughout the Chase household from her strategically placed transistor radio. Shirley’s enthusiasm for the team was boosted when she attended her first Target Field Twins game with her family for her 91st birthday, and later, her 94th birthday. Jubilantly singing “Take Me Out To The Ballgame” and seeing her name on the Twins Message Board during the games made for frosting on the cake for Grandma Chase. Perhaps having played shortstop, on a women’s summer softball team in her younger years, prepared Shirley for her love of the game.

An amazing wife, loving mother, grandmother and great-grandmother, trusted employee, volunteer and friend, with a far-reaching heart, there’s no doubt that the mold was broken when Shirley came into the world.

A celebration of life for Shirley will take place at Bonnerup Funeral & Cremation Services, 2210 East Main Street, Albert Lea, MN, on Tuesday, August 9, 2022, at 1:00 PM, with visitation one-half hour prior. Masks are required.  An outdoor lunch will follow the service. Those who plan to stay for lunch, please RSVP via email to nancycroth@gmail.com by August 4.

Shirley’s service will be available, via livestream, by going to the following link: www.bonnerupfuneralservice.com on August 9, 2022 at 1:00 PM.

Memorials may be directed to the Freeborn County Historical Museum, Library and Village, the Humane Society of Freeborn County, or the Twins Community Fund.

Shirley’s family would like to extend a special thank you to the staff members at Thorne Crest Retirement Community for providing professional care and for sharing their love with Mom. A heartfelt thank you, as well, to the staff at St. Croix Hospice.