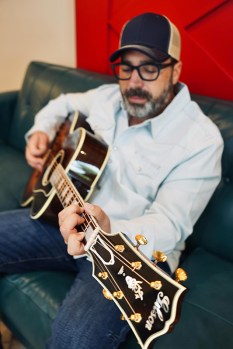 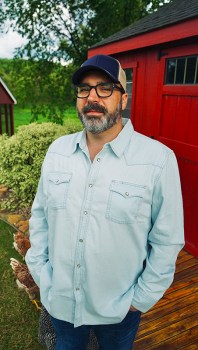 Jim Komoszewski, known professionally as Jim Anthony, is a singer/songwriter who was raised in Albert Lea and said he has been in the business since high school.

“I remember writing my first songs in junior high,” he said. “They weren’t good songs, but I knew then that I wanted to be a songwriter.”

And a singer/songwriter, according to Anthony, is different then being an artist.

“There’s a small percentage of artists who write all of their own songs,” he said. “I’m a singer/songwriter, and that’s the difference. I write, record and release all of my own songs. I don’t play other people’s songs.”

“It’s a song that really has two purposes,” he said. “One is to offer encouragement, and support, and express gratitude towards military, both past … as well as currently serving.”

The second purpose for the song: increase awareness of trauma these military members have to carry with them because of their selfless service, something he called an unseen scar.

“There’s a very small percentage of people who have sacrificed for the vast majority,” he said. “I wanted to raise awareness to the subject really of trauma, which is (Post Traumatic Stress Disorder).”

And what really inspired him to write the song was a former colleague of his, who took his own life right before Memorial Day. Anthony learned about the incident on a Thursday, and that Saturday morning, with coffee and a guitar in hand, he got to work.

“True American Hero” is part of a five or six song EP Anthony has been working on with Simon Reid, a producer in Nashville. Anthony said the EP should be released later this summer or early fall.

For those who have or are currently serving, Anthony hopes the song encourages them and lets them know people are grateful. And for people who aren’t serving, he wants them to see the selflessness of the sacrifice for those serving on other people’s behalf.

“It’s increasing awareness and appreciation, as well as expressing gratitude,” he said.

Making the song, he enjoyed telling what he felt was a complete story regarding what people should be appreciative of and grateful for.

“It’s really hard to tell a complete, meaningful story in 4.5 minutes,” he said. “But I believe this song does.”

He also admitted recording vocals was difficult after recently losing a friend to the subject he addressed.

“The challenge was singing about someone who I knew who was impacted by this who’s no longer with us, and having to sing about it really only days later,” he said.

Anthony was influenced to get into the music business from an early age, and said as a child he would watch Austin City Limits, a concert series focused on artists from different musical genres playing live.

“I was mesmerized by these artists who would play these songs that everyone could relate to,” he said. “And there was so much artistry in writing a song and then performing it, and recording it, and translating that story as the original writer that I guess was inspired by storytellers who used music as a vehicle to connect with people and to get a formative story out.”

Currently, Anthony has several albums out besides the five or six singles he has released in the last two years.

Anthony’s music is available on streaming platforms, including iTunes and Spotify. Anthony said “True American Hero” is currently being sent to radio stations nationwide, something he said he did not often do.