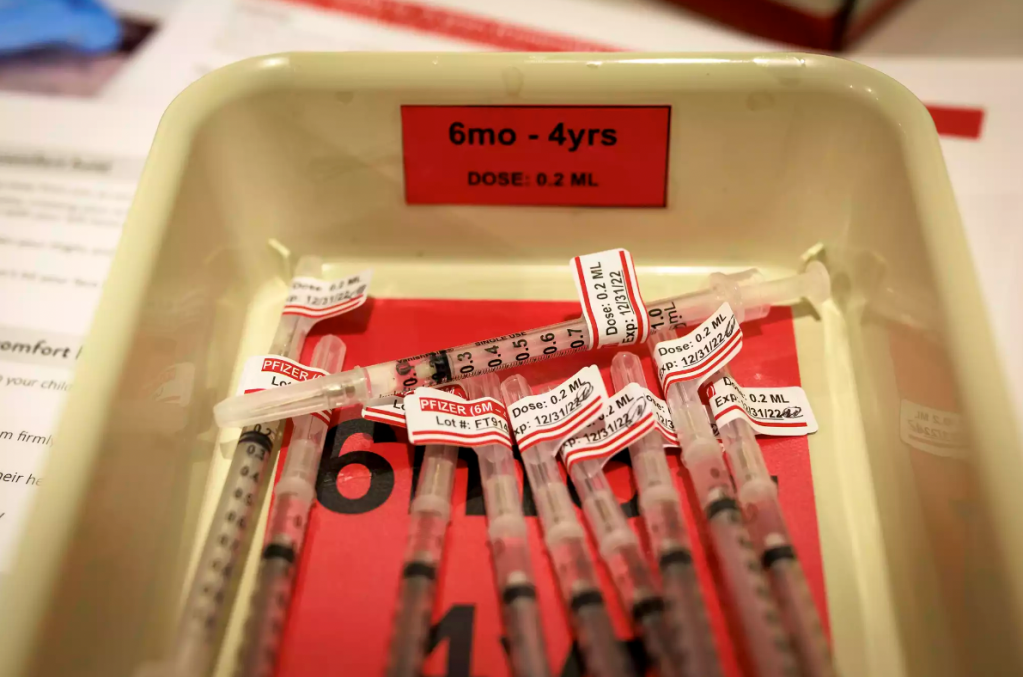 Syringes containing the COVID-19 vaccination for 6-month-olds to 4-year-olds lay on a table at the Mall of America vaccination on June 22. Kerem Yücel/MPR News

On Wednesday we learned that both President Joe Biden and Sen. Tina Smith have COVID-19. This is on the heels of learning that the Director of the National Institute of Allergy and Infectious Diseases, Dr. Anthony Fauci, tested positive.

While all were fully vaccinated and boosted, which may be helping them so far avoid serious illness and hospitalization, their cases prove the point that no one is immune — at least not for long given the virulence of the current subvariants — and that the pandemic continues.

Remember that if you are covered by health insurance, you can be reimbursed for eight free at home tests per person every month. In addition, if you have not yet received your eight free tests from the U.S. government, it takes less than 1 minute to put in your order. And Minnesota residents are also eligible for another eight free at-home tests “while supplies last.”

Four other things you should know about COVID in Minnesota this week:

Wastewater monitoring showing continued COVID decreases in Twin Cities and Northeastern Minnesota, but some increases elsewhere in the state.

CDC county-level risk assessments tick up a bit (bonus: see which of this weekend’s summer festivals are in the COVID-safest counties)

Statewide case rates remain on a high plateau — we’ve not (yet?) seen the same increases as we are hearing about nationally

Yes, cases are under-counted—maybe severely so—but that has been the case since at least April, when the Federal Government stopped requiring labs to report negative COVID-19 testing results. Over half a million tests are still reported every day nationwide, however. And those test are showing some increases, even over the last couple of weeks, that are again raising some national concerns.

While we may continue to have plenty of COVID-related concerns here in Minnesota, a notable acceleration in cases over the past couple of weeks is not one of them. Unlike much of May, the officially reported case rates are now lower in Minnesota than nationwide. Minnesota’s weekly rates are now bouncing around near 170 per 100,000 people, compared to the national rates that have climbed to over 250 in recent days.

Thursday’s dispatch of weekly data from the Minnesota Department of Health also showed that hospitalizations remain relatively stable, with regular, non-ICU admissions at a relatively high plateau of more than 50 per day. The more severe Intensive Care Unit admissions trend remains at a lower point relative to earlier waves in the pandemic, still less than 10 per day despite an upward blip in the most recent data.

Wastewater data — smelling almost as pretty this week as last

The University of Minnesota’s regional wastewater testing program is showing decreasing viral loads over the past four weeks in four of seven regions, and declines in the most recent week in three regions. Not at all terrible, but not nearly as good as last week’s report showing declines almost across the board. The trend in the southwest region, which samples from plants in Lyon and Nobles counties, is especially concerning.

Note that the single largest region in the report, the Twin Cities metro, which includes sampling from 13 plants serving about half of the state’s population, is again showing both 4-week and 1-week decreases. Not quite as robust as the continuing decreases reported for the northeast, but still hopeful.

Normally we would have parallel results from the Metropolitan Council and the University of Minnesota’s Genomic Center to compare what is happing with COVID in the Twin Cities. But their spokesperson indicated that the data are not forthcoming this week. Apparently, they are addressing some technical issues and hope to issue a report again sometime next week. They did state, however: “Based on the preliminary data we can confidently report that there has been no significant change in the amount of viral material entering the plant over the past week.”

The CDC’s weekly “Community Level” ratings are showing more counties at medium (37) and high risk (5) this week than last (3 and 22, respectively). Fortunately, most of this weekend’s festivals—at least those featured by our colleagues who put together MPR News’ weekly newsletter called The ‘sotan—are in counties with lower risk levels.

** Case rates of 100+ are rated as having “high community transmission.”

The CDC’s guidance only recommends masking indoors for everyone when “Community Level” ratings are high (currently Kittson, Martin, Olmsted, Wadena and Winona counties in Minnesota). Their stated guidance for “medium” rated counties includes “If you are at high risk for severe illness, talk to your healthcare provider about whether you need to wear a mask and take other precautions.”

As the notes above show, however, the CDC’s COVID-19 “Community Transmission” ratings make conditions seem more worrisome. Seventy-two of Minnesota’s 87 counties (along with 93 percent of all U.S. Counties) are currently rated as having “high transmission,” with weekly case rates of 100 or more per 100,000 residents. COVID-19 case rates are currently highest in Wadena, Rock and Koochiching counties, all above 250.

This week’s new update to the Color of Coronavirus project, which tracks COVID-19 mortality by race and ethnicity for every state, included some relatively good news. Nationally the month of May had the second-least number of deaths since the pandemic began. The downside was that deaths were up slightly from April, so a three-month streak of decreasing deaths was ended.

Perhaps the most compelling, and troubling, Minnesota-specific finding out of this update is that death rates are particularly high here among Asian Americans. Second highest among the 21 states where we are able to make apples-to-apples comparisons via age-adjusted data.