An Albert Lea woman said she will stand up for the quiet voices in the community and be a leader if elected to the open Ward 6 seat this fall on the Albert Lea City Council. 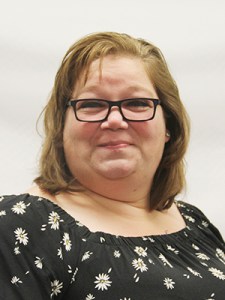 Carmen McColley, 46, is one of three people running for the position after longtime Councilor Al “Minnow” Brooks announced he will not seek reelection to the seat. She will face off against Brian Anderson and Nick Ronnenberg in the Aug. 9 primary election.

McColley said she moved to Albert Lea almost four years ago to be closer to family. She and her husband, Randy, recently adopted an 8-year-old boy with special needs, Kendrick, and have three other grown daughters.

She said she has a background as a paraeducator but left her job to homeschool her son.

McColley said she has some friends close to politics and one friend was looking for someone strong-voiced and passionate to run for the council.

She considers herself to be a problem-solver and said she would listen to constituents and speak up when needed.

“I’m not a passenger, I’m more of a leader,” she said. “And if things aren’t right, I will voice my concern. I’m not a follower, I’m more of an announcer, and I think that’s pretty much what the council needs right now — a voice that listens and is heard.”

McColley said she has been concerned about the city being in the real estate business, about wasteful spending and about religious views on the council. She is also worried about what she described as a lack of resources for special needs children in the community outside of school.

She is concerned about the empty buildings throughout town and in making the south side of town more inviting and refreshed, with not as many empty buildings.

She said people are always encouraging residents to shop locally, but she feels like there are more businesses empty than filled and people instead end up going to big-box stores like Walmart.

“I’m a passionate person and I don’t just flow with the stream,” she said. “I’m not just going to be passive — I will stand up for the quiet voices.”

She said the slogan of her campaign is “Voice of the future.”

She will be at an event slated for July 24 at Hardee’s for people to hear about her candidacy and also said she will be out door knocking, in the Third of July Parade and on Facebook.