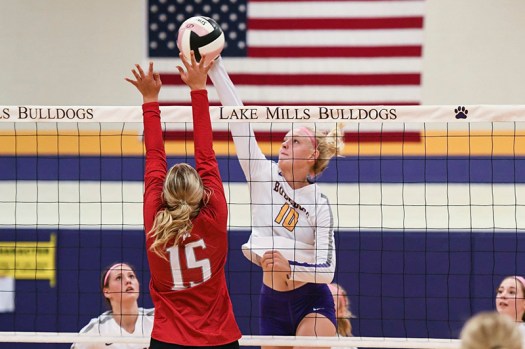 Ellie Hanna hits the ball over the net Thursday night at home in the game against West Hancock. The team won 3-0. Lory Groe/for the Tribune 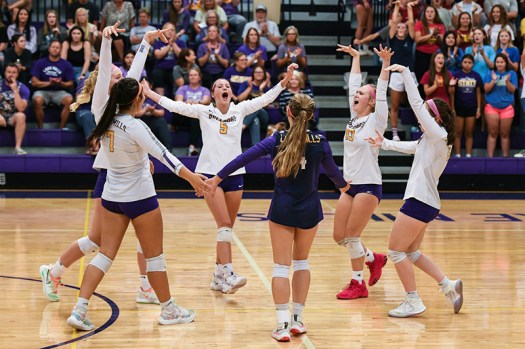 The Lake Mills team celebrates during the match against Lake Mills Thursday. Lory Groe/for the Tribune

The Lake Mills volleyball team got the 2022 season off to a bang Thursday night when they hosted West Hancock in a Top of Iowa Conference showdown.

“I was very pleased with how we played tonight,” said head coach Jim Boehmer. “I thought we were better in all phases of the game than I expected at this point. We know we have a lot of work left to do, but we finally got to execute outside of a practice session. It’s been a long preseason so we needed to get on the court.”

Senior Ella Stene and junior Dottie Byars led the team with six kills each. Senior Ellie Hanna and Finley Rogstad were right behind with five each. As a team, the Bulldogs recorded 28 kills in the match.

Boehmer praised his team for their efficiency on offense.

“We did not have too many errors and everyone was smart with the ball,” he said. “We have tried hard to train our minds to play the game and tonight they worked to incorporate that into the play and our game plan.”

Senior Karlie Helgeson led the squad with 24 assists. Boehmer said Helgeson is new to the varsity lineup this season and said she did a great job leading the offense.

“We have the potential to be a great defensive team,” Boehmer said. “We have great experience back on defense with Natalie (Brandenburg), Taylor (Vanek) and Finley (Rogstad). Add in Brynn (Rognes) and I think we have all the ability we need to compete with some great teams.”

The Bulldogs start the season 1-0 and will be back on the court Tuesday when they hit the road to take on the Broncos of Belmond-Klemme.