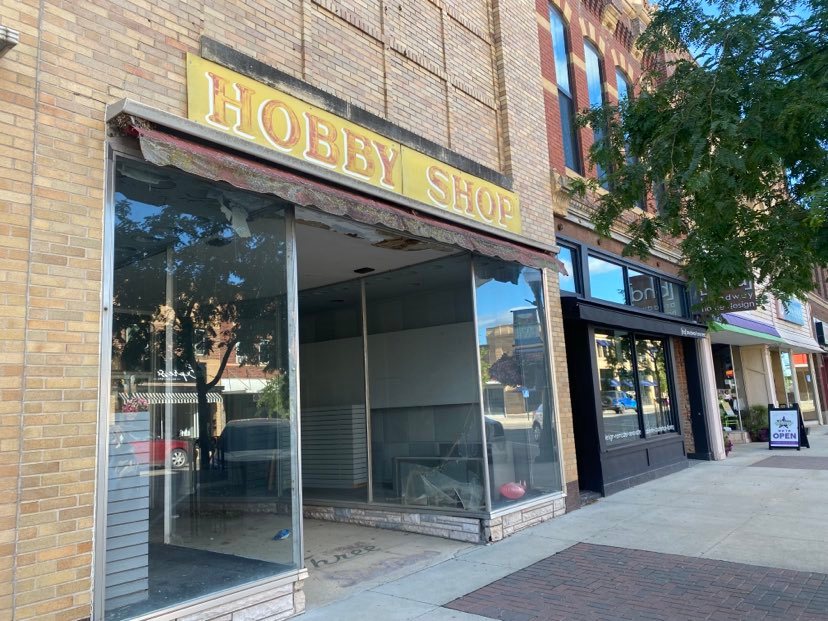 The council voted to acquire 132 S. Broadway in a meeting in August. Sarah Stultz/Albert Lea Tribune

The Albert Lea City Council voted unanimously Monday to acquire four tax-forfeiture properties within the city with significant blight or hazardous material concerns to preserve them for resale or demolition because of their dilapidated conditions.

The properties are at the following:

City Planner Megan Boeck said there is potential that the basement could be stabilized at 110 N. Second Ave., though that is not definite, and the two properties at 401 W. College St. and 604 Giles Place are deemed unsalvageable and will be demolished. The Giles Place house had been damaged by fire in October 2020 and had been vacant prior to that.

With the property on Broadway, known by many as the former Hobby Shop, the city has already invested significant funds to stabilize the building, including putting on a new roof in 2018 and removing some water-damaged items, and will require additional hazardous material removal and structure repairs to preserve the historic building.

“During the course of the roof replacement the architect, contractor and myself were convinced that if not done neighboring building structures would have been in immediate hazard,” City Building and Zoning Official Wayne Sorensen said via email Tuesday morning.

Sorensen said at minimum the city will at minimum need to reconstruct the basement stairs that collapsed due to water damage and clean out and dispose an extensive amount of electronic materials and components in the basement. There will be some asbestos removal and hazardous material abatement required, and a portion of the main floor framing that was originally affected by the roof will need to be evaluated and possibly repaired or replaced.

Costs for the stabilization are still being finalized.

The property already has over $100,000 in city assessments.

According to the resolution approved, the city will acquire each of the properties for $1. State statute and city code allows the city to carry out nuisance and blight control and remediation and to demolish hazardous or unsafe buildings to protect health and safety.

The resolution states the city reserves the right to waive or reassess any special assessments on the properties when they are returned to private ownership.

With repairs completed to stabilize a house at 313 E. Eighth St., the council voted to authorize the advertisement of request for proposals for the sale of the house.

The city acquired the house after it was tax-forfeited, and it is part of the city’s new pilot project to stabilize tax-forfeited properties when possible and return them to the market.

Instead of demolishing all of the tax-forfeited structures the city obtains, the city is trying out rehabbing three buildings still worth saving and using the money it would have spent on demolition costs for the repairs.

For the Eighth Street house, specifically, the structure was stabilized with new basement walls, and the electrical panel was moved.

The council set the asking price at $29,900 starting and capped it at actual expenses incurred by the city. The city manager has previously said the city cannot make money on the sales, and the cash loss for the city for a house would be equal to or less than demolition costs — typically $15,000-$30,000.

After the buildings are sold, a developer could do further updates, such as painting, flooring, kitchen or other updates, and then sell or market the property for use.

The council in mid-July authorized the advertisement of request for proposals for the sale and development of the first property in the pilot program, 1039 S. Broadway, and work is still ongoing on the third property in the program, a house on Newton Avenue.

Albert Lea Mayor Vern Rasmussen Jr. said it would be interesting to see how the program goes for the community and noted it is a new step to try to stabilize some of the buildings going into disrepair but have an opportunity to be saved.

“It costs us money to knock them down anyways,” he said. “And so we’re trying to offset that cost and put it back into the building, saving it and hoping someone can take this on and bring it back to life.”

• Approved the second and final reading of an ordinance changing the zoning from single family residence to limited industrial for a property at 904 Spark Ave.

The property, being purchased by Broadway Home Design for $5,000, is .63 acres in size and is on the southwest corner of Belmont Street and Spark Avenue.

The company plans to build a new 3,500-square-foot warehouse and sales office.

Third Ward Councilor Jason Howland said he voted no on the project because of input he received from neighboring properties. He said there were a number of residents who did not want to see that side of the street zoned industrial being adjacent to homes.