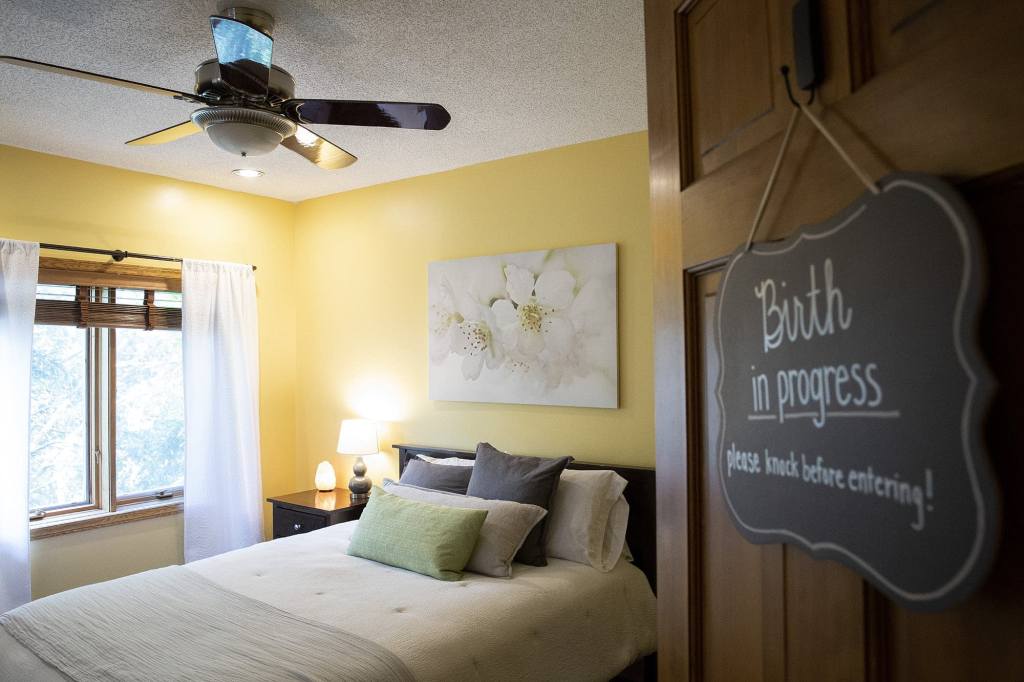 One of the birthing rooms at Roots Community Birth Center in Minneapolis, Minn. The Minnesota Health Department calculated 8.8 pregnancy-related deaths per 100,000 live births, and that the percentages for people who identify as Black or Native American were “disproportionately high." Christine T. Nguyen/ MPR News 2019

A snapshot look at pregnancy-related deaths in Minnesota found all of the deaths could have been prevented and that pregnancy-associated deaths were disproportionately high among Black and Indigenous people.

The Minnesota Health Department identified 48 people who died of both pregnancy-related and unrelated causes while pregnant, including vehicle accidents and drug overdoses, during 2017 and 2018.

In that time period, the state calculated 8.8 pregnancy-related deaths per 100,000 live births, according to the Health Department report released Thursday. That’s about half the national rate in 2017, or 17.3 deaths per 100,000 births.

Of the 12 pregnancy-related deaths — where pregnancy was the aggravating factor — the report concluded that half occurred within six weeks after birth, and all of them were determined to be “preventable.”

“The health of our mothers is a key indicator of the health of our state,” Minnesota Health Commissioner Jan Malcolm, said in a statement. “Each maternal death is tragic, and the racial disparities we see in the data are alarming.”

Malcolm said they mourn those lost, and called the report a “critical first step” to prevention.

While white, non-Hispanic people made up 60 percent of the pregnancy-associated deaths, the percentages for people who identify as Black or Native American were “disproportionately high,” researchers said.

Indigenous Minnesotans, for example, made up 2 percent of all births during this time period, but accounted for 8.3 percent of pregnancy-associated deaths.

The northwest and south-central regions of the state also had a higher percentage of deaths than births during this period, although most deaths and births overall took place in the metro area.

While the relatively small number of deaths makes it difficult for researchers to identify broader trends, the report recommends improvements in the identification and collection of data related to maternal deaths.

“Our work identifies a significant need for focused services after pregnancy delivery, during what is now being called the fourth trimester, given that well over half of pregnancy-associated deaths occur during this time,” Dr. Cresta Jones, co-chair of the Maternal Mortality Review Committee, said in a statement. “Typically, individuals are not seen after delivery for 6-12 weeks.”

The report also recommends developing a standardized network that helps people find care and creates more support for those dealing with substance abuse or mental health issues to improve overall outcomes and calls for greater efforts to provide “culturally-informed” care.

The report was compiled and analyzed by the state health department’s Women and Infant Health Unit along with the state’s Maternal Mortality Review Committee, which was formalized in a 2021 statute.

Hardeman said she views the report as a “marching order” for health care systems and policymakers.

“We, as a state, have talked about maternal mortality and morbidity for a long time, but we haven’t actually had the data to rely on to say, ‘Here’s exactly what’s going on,’” she said. Pregnancy-related deaths, pregnancy-associated deaths and maternal mortality, are “deeply tied to one’s ability to live in healthy and safe and vibrant communities.”