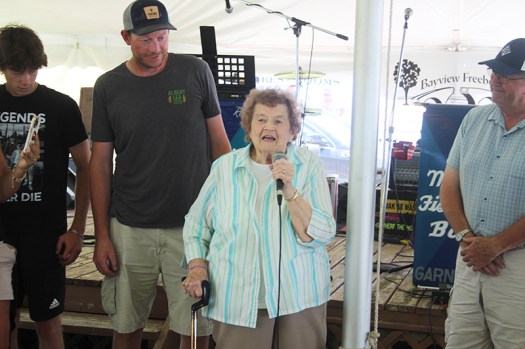 Lorraine Olson Bakken, who joined 4-H after her neighbor got her into the club, was the oldest 4-H member recognized Wednesday. Alex Guerrero/Albert Lea Tribune 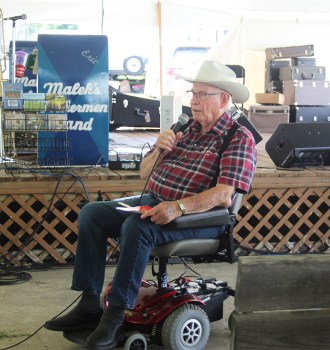 Kendall Johnson was among the group of 90+ year-olds recognized by 4-H Wednesday. Alex Guerrero/Albert Lea Tribune 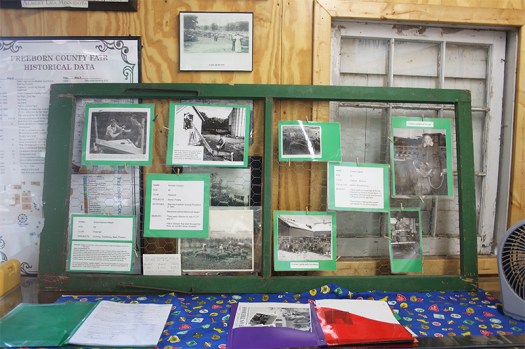 Besides recognizing their oldest members, there was also a display recognizing the history of 4-H in Freeborn County at the Heritage Barn. Alex Guerrero/Albert Lea Tribune 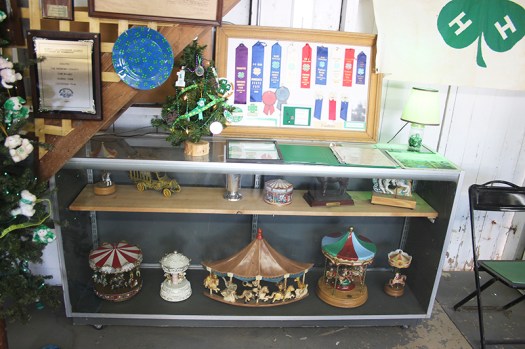 The idea to celebrate 100 years of 4-H in Freeborn County at the fair was originally in 2020, but plans did not take off until 2022. Alex Guerrero/Albert Lea Tribune 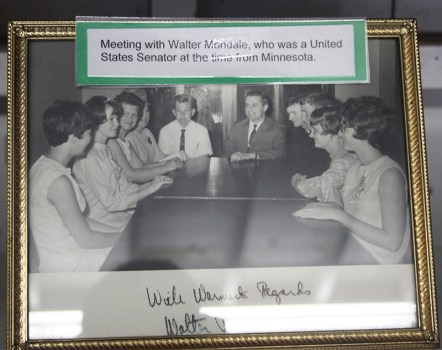 4-Hers even got to meet Walter Mondale. Alex Guerrero/Albert Lea Tribune 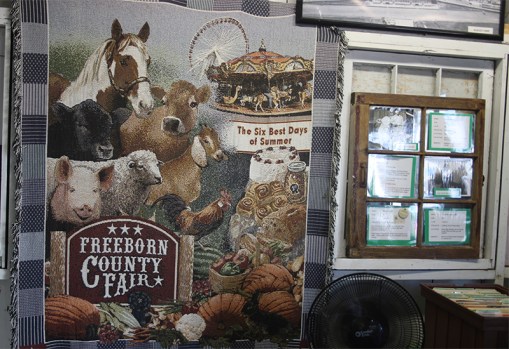 Among items being displayed at the Heritage Barn are quilts. Alex Guerrero/Albert Lea Tribune

Freeborn County has been celebrating a century of 4-H this week during the county fair, part of what Amy Wadding, extension educator for 4-H Youth Development in Freeborn County, described as a year-long celebration.

“We are trying to do something special each day to celebrate this milestone of the fair,” she said.

The planned celebration was in the works since 2020, but Wadding said the plan took off in January 2022.

“Each month we’ve celebrated and tried to do different things that pay tribute to this milestone in our community,” she said.

Mary Chicos, who ran the Heritage Barn at the fair and volunteered to help with the celebration, said marking a century of existence was important.

“I think that any time an organization that concentrates on youth development that can sustain for 100 years, it’s an important program and has done a lot of good for kids for a long time,” she said.

Chicos described 4-H as a youth development organization for those from kindergarten to one year after high school graduation. Currently there are 436 members.

Those in kindergarten, first and second grade are Cloverbuds, meaning they can participate at a limited level, but those in third grade and higher are full-fledged 4-H members, which allows them opportunities in livestock showings and presents more opportunities for projects, including those in photography, creative and fine arts, expressive communication, child development and clothing, to name a few.

There’s also an emphasis on leadership development, which she called the most important aspect of youth development.

She said 4-H started as an outreach agricultural organization for those needing education in rural areas.

“The USDA actually started the program as an outreach for farmers and homemakers,” she said.

Chicos herself was involved in Sibley County 4-H and had older brothers and sisters who helped her with livestock and other projects involving food, gardening and leadership.

The organization also has a “self-determined” project, designed for kids with their own interest areas not covered by any set project area.

“A friend of mine was very interested in coin collecting,” she said. “And he just didn’t really know where that would fit in any of these other set project areas.”

Wadding said there were 11 clubs operating in the county, which are affiliated with the University of Minnesota.

“The University of Minnesota is Minnesota’s land-grant university, so we’re tied up all the way back to the United States Department of Agriculture,” she said.

For Wadding, she wants to expose young people to “positive youth development” and new opportunities for self-guided learning.

And like Chicos, she said 4-H was not just livestock or farming.

“Pretty much everything you do can be tied back to agriculture,” she said. “It’s the food you eat, the clothes you wear, the industries that get us from point A to point B.”

To celebrate, Wadding and her team have held different events each day, and on Wednesday 4-H recognized their oldest members, those 90 and over, at Entertainment Square.

“It shows that these families have a commitment to the 4-H program and our community, and they are fourth- and fifth-generations that are coming through this program, which testifies to our strength and our deepened roots and our program,” she said.

While planning the celebration, Wadding admitted that because of all the other obligations 4-H had to the fair with livestock shows and static project opportunities, she was worried about how much time she had to honor the older members. So she’s relied on committee members to help.

According to Wadding, the oldest member recognized was 97-year-old Lorraine Olson Bakken, who joined 4-H after her neighbor got her into the club.

Bakken did not have animals to show, but she said she learned to sew. She also loved the interactions with other members, some of them she said she still kept in touch with.

This was her first time at the fair in “many years,” but after she was contacted about being recognized, she said she would be attending.

Kendall Johnson, who joined when he was 5, was also recognized.

“I had chickens and mostly hogs and then also demonstrations,” he said. “That was my favorite, to give a demonstration as to how to do something, how to build something.”

One important lesson he learned: Do not settle for the best, but instead make the best better.

There will also be a party Saturday between the auction and sale of champions with refreshments and cookies. Sunday a Parade of Champions was being planned.

But fair week is not the only time 4-H will be recognizing the milestone.

“We will do kind of a customer appreciation in the fall during National 4-H Week for our families to take advantage of to have to-go meals,” she said. “We plan to celebrate at our county banquet in November and we plan to do other things that our committee decides of value.”

To qualify for Freeborn County 4-H membership, a person does not have to live within the county, and Wadding said there were a number of members from surrounding counties. Four-H stands for Head, Heart, Hands, Health.