When our service members signed up to sacrifice and defend our nation, there was no waiting line. And when they come home, there shouldn’t be a waiting line to access the care they need. I have always believed that when we ask our young men and women to fight for our nation, we make a promise to take care of them when they return home. 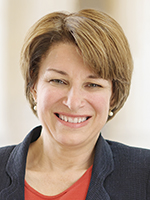 During their deployments, American service members in Iraq and Afghanistan were stationed near burn pits used to destroy waste, including old batteries, aerosol cans and tires. In the years following their service, many of them developed illnesses ranging from asthma to serious forms of cancer. For far too long, these veterans have not received the level of treatment they deserve.

From 2007 to 2020, the Department of Veterans Affairs denied 75% of disability claims related to burn pit exposure on the basis that they were not “service-related conditions.” Yet for our service members, veterans and many health care workers who treated them, the connection was clear.

I think about Capt. Rafael Barbosa, who was diagnosed with Stage 4 colon cancer after being exposed to burn pits while serving in the military. He and his wife, Amanda, have since become key advocates for veterans exposed to toxic substances.

There’s also the tragic death of Amie Muller of Woodbury who served in Minnesota’s National Guard. She served two tours in Iraq and was stationed right next to one of the most notorious burn pits. Amie passed away in 2017 at age 36, nine months after being diagnosed with Stage III pancreatic cancer, leaving behind her husband, Brian, and their three children. Amie’s story made it clear to me that we must do everything in our power to ensure service members and veterans exposed to burn pits can get the care they deserve.

In the years since, I have led and worked on several bills to address both the immediate and future health needs of service members and veterans exposed to toxic substances during their service. And I fought to make sure some of those solutions were included in the landmark SFC Heath Robinson Honoring Our PACT Act, which was just signed into law.

With this legislation, we can finally turn the page on those infuriating stories about sick veterans who were forced to jump through hoops to prove the obvious: Their illnesses were connected to their service. Treatment for conditions related to their toxic exposures will now be covered free of charge, and previous claims that were denied will be identified and reevaluated.

As a nation and as a state, we have an obligation to support those who never hesitated to put their lives on the line when our country was at risk. I am committed to continuing to ensure that we fully repay the debt owed to the valiant service members who have sacrificed so much to protect our freedom.