Larry Stanley Lenz was born June 2, 1942 in Albert Lea, MN, the son of Stanley and Idoris (Hanson) Lenz. He grew up on a farm near Conger, MN. He attended and graduated from Emmons High School in 1960. He went on to study at Iowa State University. 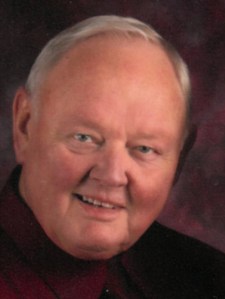 Larry was united in marriage to Delores “Dee” Rasmusson on November 17, 1962. They made their home in Freeborn, MN. He worked for Case as a blockman. He was drafted into the United State Army in 1966 and served in Korea and was honorably discharged in 1968. When he returned home, Larry continued to work for Case in Freeborn until being transferred to Case in Algona where he was the store manager for 18 years. He then spent the next 29 years as an insurance agent with Klein Insurance, retiring in 2015.

Larry enjoyed being outdoors, hunting, fishing, golfing in the 50 and over league, whom he referred to as the wobblers, trapshooting, and coaching high school trapshooting. He also enjoyed entertaining, playing cards (especially poker), cooking (his food was enjoyed by many), traveling, and wintering in South Padre, Texas and Puerto Vallarta, Mexico

Even though Larry moved off the farm he was still a farmer at heart. He enjoyed helping local farmers in the fall. He was a member of the Izaak Walton League and the First Presbyterian Church.

Larry passed away Monday, August 15, 2022, at the Kossuth Regional Health Center. He was 80 years old.

Larry was preceded in death by his parents; his in-laws, Ardell and Ruth Rasmusson; and his grandparents.

In lieu of flowers, memorials may be directed to the East Fork Izaak Walton High School Trapshooting League.