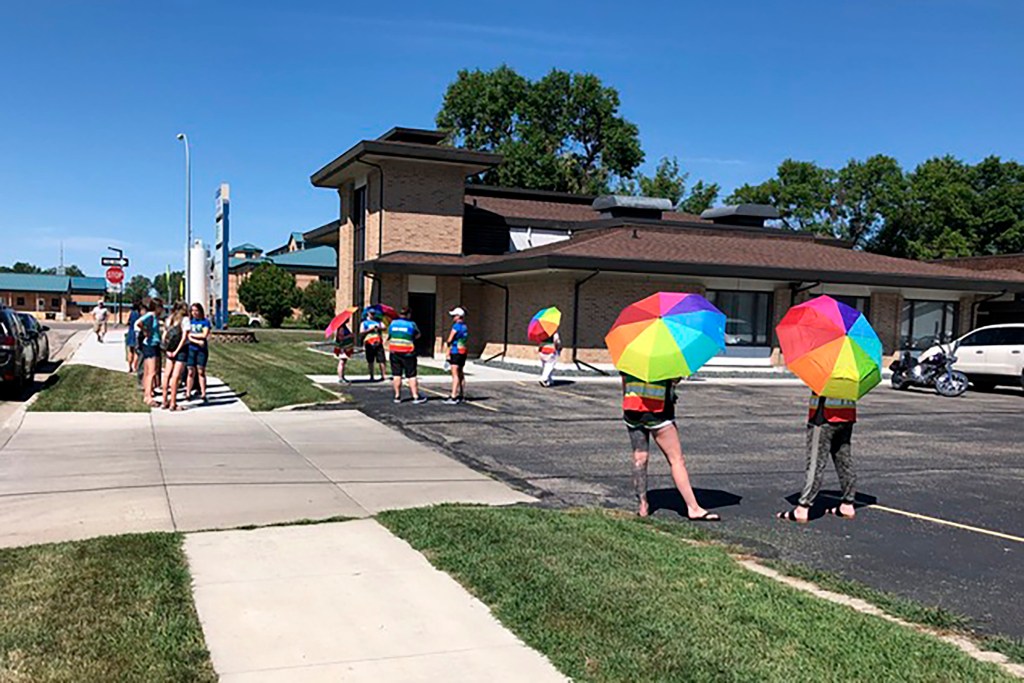 Volunteer escorts and others stand outside the Red River Women's Clinic in Moorhead Wednesday, Aug. 10, 2022. The clinic has operated since 1998 in Fargo, where it was North Dakota's only abortion clinic, but now faces likely shutdown on a trigger law banning abortion due to take effect in late August. Wednesday was its first day of operation just a couple of miles away at the new Moorhead location. (AP Photo/Dave Kolpack)

BISMARCK, N.D. — Lawyers for North Dakota’s only abortion clinic asked a judge Friday to delay a trigger law set to ban abortion starting next week, while they pursue a lawsuit challenging the ban on constitutional grounds.

The abortion ban is set to go into effect on Aug. 26. The Red River Women’s Clinic in Fargo is seeking a preliminary injunction as part of a lawsuit that says the ban violates the state constitution.

Burleigh County District Judge Bruce Romanick said he would make a decision on the motion by the end of next week. He did not say how they would proceed with the lawsuit.

Romanick put the trigger ban on hold last month when he ruled that Attorney General Drew Wrigley was premature in setting a July 28 closing date. The judge issued a temporary restraining order that in effect gave the Fargo clinic time to transition to a new location in nearby Moorhead, Minnesota, where abortion remains legal, even as it seeks to block the ban.

The clinic has been offering services at the new location for the past two weeks.

The clinic’s lawsuit argues that the state constitution’s guarantees of rights to life, liberty, safety and happiness effectively guarantee a right to abortion. Lauren Bernstein, an attorney for the clinic, said the ban would not only violate the constitution, it would remove 50 years of abortion access in the state.

“The stakes really could not be any higher,” Bernstein said during the 45-minute hearing.

Matthew Sagsveen, an attorney for the state, told a mostly empty courtroom in Bismarck that there is no fundamental right to abortion “either expressed or implied” in the state constitution.

The Legislature passed North Dakota’s trigger law in 2007 to kick in if the U.S. Supreme Court ever overturned its 1973 ruling establishing nationwide abortion rights. The high court did so in June.

The trigger ban would put into effect laws that would make abortion illegal in the state except in cases of rape, incest and the life of the mother, all of which would have to be proven in court. Otherwise, a doctor who performs an abortion would face a felony.

Whether North Dakota’s constitution protects a right to abortion has come before state courts before. A Cass County judge ruled that a 2011 law aimed at regulating medication abortions was unconstitutional, saying it essentially eliminated the procedure and illegally restricted abortion rights.

The case went to the state Supreme Court, where in 2014 two justices ruled that the North Dakota Constitution does not protect abortion rights, two said it does and one justice said it wasn’t their place to decide. It takes four justices to declare a law unconstitutional, so the lower court ruling was reversed.

Before Romanick’s ruling, Steve Morrison, a University of North Dakota professor and expert in abortion law, said he was skeptical that the high court “or any district court judge in North Dakota is going to … start reading into the state constitution’s right to abortion.”

A GoFundMe page set up to help pay for the Red River clinic’s relocation raised $1 million in the weeks after Roe’s reversal.