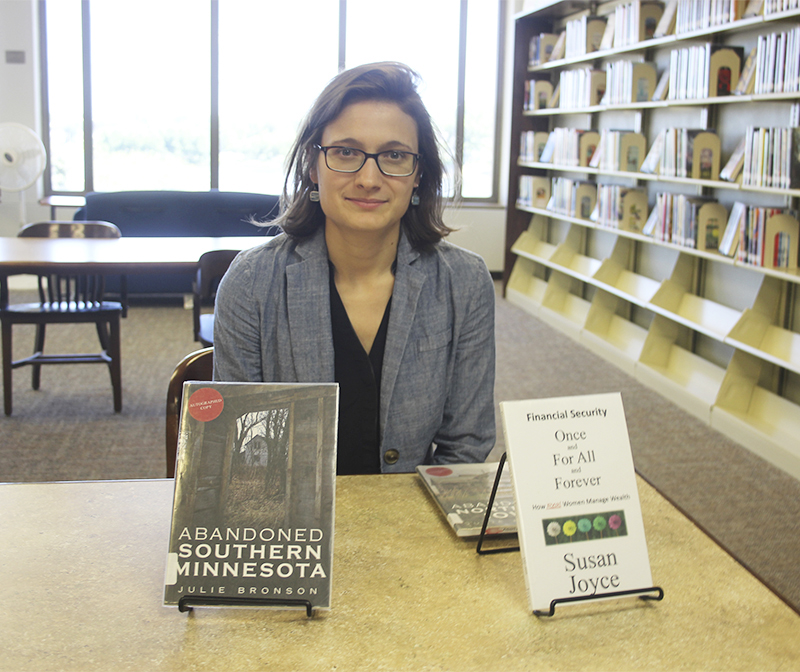 This is the first time the library is having a Local Author Festival. Alex Guerrero/Albert Lea Tribune

If you’ve ever wanted to know how authors do what they do, you don’t want to miss Tuesday’s Local Author Festival at Edgewater Bay Pavilion.

According to Annice Sevett, Albert Lea Public Library director, the event will consist of “a short panel discussion” with the authors followed by a meet-and-greet. During the meet-and-greet, attendees will have an opportunity to buy books.

“A Local Author Festival is just kind of a way to showcase local authors in the area “ she said. “We’ve had a lot of local authors kind of ask to do events at the library, and we thought it would be great to get them all together in one space.”

She decided to have it in August as children’s programming has finished and the weather was still good.

“We’re starting to get into colder months where we tend to see our circulation, especially among adults, go up,” she said.

Having done it this way, she hopes authors will meet each other while attendees have the opportunity to see several of their authors at the same time.

“It kind of stems from just talking to a couple local authors in the area and hearing interest in local authors doing events and getting their names out there, especially in their own community,” she said.

She said the authors, who live within a “general 30ish-mile radius” represented a good mix of fiction, nonfiction and different topics.

“The five authors will participate in a panel with some questions, and then the audience will have a chance to ask questions with the panelists, a Q-and-A,” she said. “After the panel discussion each author will have a table, and they’ll be able to talk to attendees one-on-one about their writing style, their books, and then sell books.”

The festival was inspired in part by an adult writing workshop program the library held, which she described as being popular.

“Those attendees have shown interest in writing, getting published, and so I thought that it would be a great way to just kind of showcase the local authors that we have in the community, give attendees a chance to talk to them, ask questions and then support the local authors and give them an opportunity to talk about their work and what they do,” she said.

Sevett also thought it would be a good idea to get them together.

“One of them did a single program here at the library that was very well attended, and then I talked with another one who was talking about the writers group that she runs in town and how there are a lot of authors that are published in her writing group that would love to showcase their talent,” she sent. “So I thought … celebrating local people would be a really great thing.”

She wants attendees to learn about different writing styles, how the authors got into publishing and writing in general.

“I think there’s a lot of people in our community from what I’ve heard who are interested in writing or interested in potentially getting published,” she said. “There will be an opportunity for attendees to ask that as well.”

This is the first time Sevett and her team have held a Local Author Festival.

The event starts at 6 p.m. Tuesday at the pavilion.