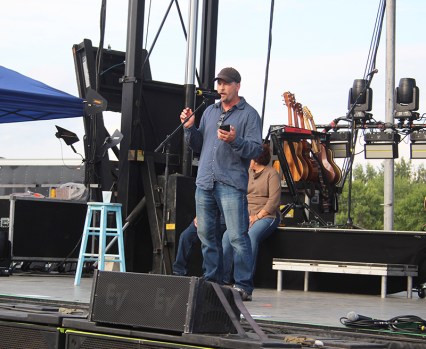 Mike Larson, president and CEO of Innovance, the parent company of Lou-Rich gives his opening remarks on the grandstand stage Thursday during what was a 50-year celebration for the company. Alex Guerrero/Albert Lea Tribune 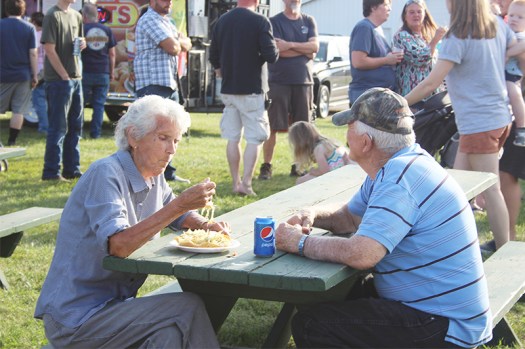 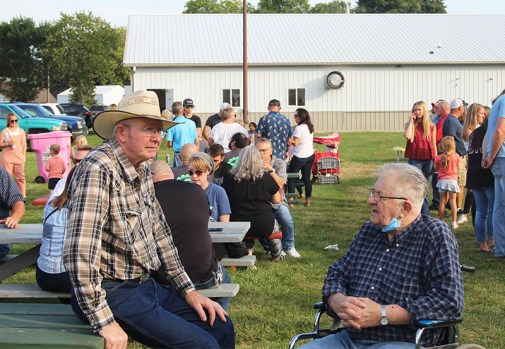 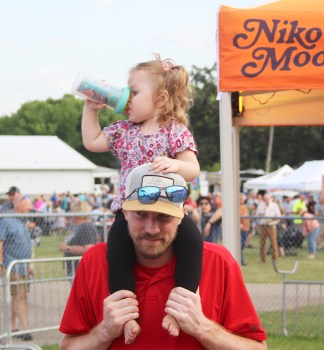 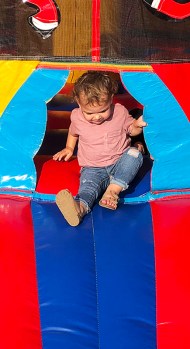 Chandler Vietze prepares to go down a bounce house slide. The bounce house was one of three at the Freeborn County fairgrounds Thursday during Lou-Rich's 50 year celebration. Alex Guerrero/Albert Lea Tribune

Even though the weather prematurely cut the celebration short, if it sounded like the county fair was still going on Thursday, your ears were not deceiving you.

“This year, 2022, is the 50th anniversary of our Lou-Rich business, which is kind of our foundation business,” said Mike Larson, president and CEO of Innovance, a 100% employee-owned company.

According to Larson, the celebration — which he hoped would draw close to 1,000 — started at 5 p.m. at the Freeborn County Fairgrounds. He also admitted the company had not done anything to recognize five- or 10-year celebrations for a number of years.

During those previous events, the company would set up tours of the factory for the community.

With the 50-year celebration, all employees, retired employees, board of directors and their immediate families were invited.

Besides food, there were raffle drawings, popcorn from Kiwanis and mini doughnuts. Prizes for the raffle included, but were not limited to, a kayak, a big-screen TV, paid time off and $2,000 towards a vacation.

“We have hired a really good musician called Niko Moon,” he said, referring to Mike Woitas’ work getting entertainment for the county fair. Moon played for about 30 minutes until lightning ended the show.

According to Larson, planning started two years ago even though what the company wanted to do wasn’t decided immediately.

“We had ideas from taking everybody up to a Twins game, renting out a big section of the Twins,” he said.

“We even talked about a Saints game,” said Greg Thomas, sales and marketing director for Innovance. “We talked about doing something else locally, but really we settled in on this six months ago, maybe a little longer.”

“Most small businesses don’t last very long,” Larson said. “It’s rare that a small business lasts 50 years, and this Lou-Rich business not only survived, but it’s really thrived because today, instead of a two-man shop in 1972, we have over 300 employees at this company.”

Debbie Pilgrim, a customer service manager, has been with the company for 32 years and described the celebration as her last “hurrah” as she planned to retire at the end of the year.

She was excited to see the retirees and those she did not see on a daily basis.

“I think it’s just totally awesome to think that this company started in two people’s garage and grew to this in 50 years,” she said.

Pilgrim also described the company as a great place to work, enjoyed working there and was looking forward to retirement.

Laverne Jensen, a program manager for the company, has been at Lou-Rich for 45 years and wanted to attend to see all the employees and new faces get together and appreciate what they’ve created.

Like Pilgrim, he most looked forward to seeing old faces and the company come together.

“It’s something that is very, very exciting, being with the company as long as I have,” he said.

Blaire Matthees, a marketing/communications specialist at Innovance, has only been with the company since January 2021 and helped to organize the celebration.

“I think it’s just a really great opportunity,” she said.

Lou Larson and Rich Ackland, whom Larson described as tool and dye makers by trade, opened Lou-Rich on Mar. 6, 1972 in Hayward.

Lou-Rich actually started in Hayward, and their first employee was Sue Berg.

“She was only hired for two weeks to set up the books for them, the accounting books, and forty-some years later she finally got those books set up and retired out of this company,” he said.

Lou Larson and Ackland retired in 1992.

“There’s a lot of family values and camaraderie amongst our employees, and we want to continue to build that, and sustain that and make that even stronger,”  he said. “That’s what’s really made our company successful.”

Besides Lou-Rich, Innovance also invited employees from their other businesses, ALMCO, Mass Finishing Inc. and Panels Plus.