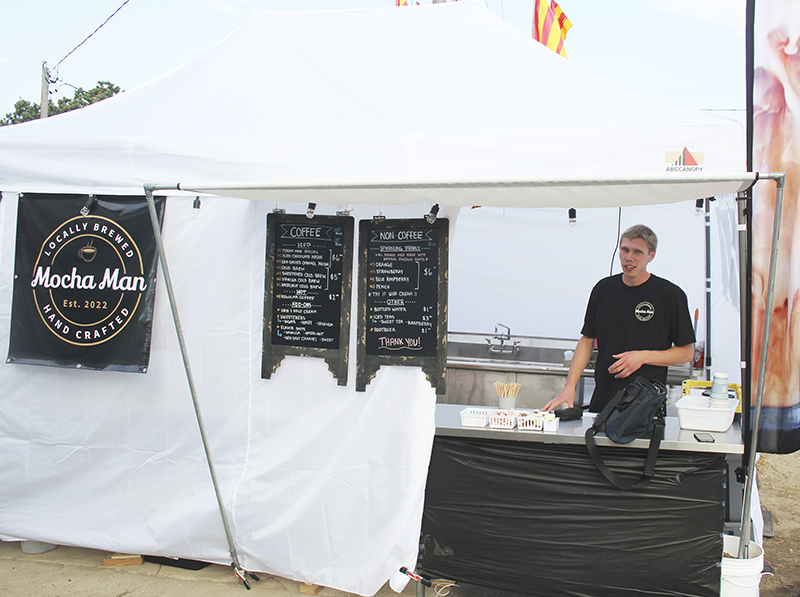 Mocha Man is located behind the Grandstand at the Freeborn County Fair. Alex Guerrero/Albert Lea Tribune

Those are some of the food and drink items available for sale at the Freeborn County Fair.

But never what many deem a necessary grown-up drink — coffee. At least until this year, when Samuel Louters decided to open up Mocha Man.

“I kind of had this idea a few years ago,” Louters said. “My family has always liked coffee and stuff, and we’ve always thought this would be a good place. We’ve never seen a coffee booth here.”

And this year he pulled the trigger.

“I’m actually kind of new to the whole cold-brew coffee thing,” he said. “… I’ve learned how to do it very recently here.”

Coffee is something he has enjoyed “a lot” and feels passionate about. But he has never had experience either as a barista or working in any type of coffee shop.

In fact, he started making them earlier this year and taught himself, initially putting in “maybe a couple hours a day.”

Despite his parents drinking coffee his whole life, Louters’ love for coffee developed around the age of 17.

And for the last month, he has been working anywhere from four to six hours each day and developing recipes.

“I’ve been able to produce some good drinks, I think, and hopefully people like them and keep coming back,” he said.

What makes cold-brew different is the time it takes for coffee grounds to be absorbed into water.

According to Louters, a good cold-brew coffee takes anywhere from eight to 24 hours to make, with the amount of time the coffee sat determining the flavor.

Cold-brew also has less acid, which according to Louters makes it smoother.

“The long process of brewing brings out a better flavor from the coffee bean,” he said. “There’s a lot of different flavors in a coffee bean that you can extract depending on the temperature of brewing and how long you brew, and so the cold brew process just brings out some very good flavors.”

According to Louters, 24 hours produces a more chocolate-tasting coffee, while a little less time then that would produce more “fruity” coffee.

Previously, Louters — who enjoys anything from frozen coffee to iced coffee— said whenever he went to the fair he would look for a coffee stand but could not find one. So he went ahead with the idea.

He’s also confident in what he has been able to create, including mochas. Those include The Mocha Man Special, the chocolate mocha and a sea salt caramel mocha.

Between developing drinks and working to get a permit for the fair, he’s kept busy.

“It’s been pretty busy the last couple months getting ready cause I didn’t start until probably March getting ready for everything,” he said. “It’s all come together, and here we are.”

For those interested in getting a drink, The Mocha Man is at the north end of the Grandstand and just behind it, next to the Greek shish kebab stall and the beer garden.

Louters, who admitted he was not sure when people would want coffee, said the stall would be open at 6 a.m. during the fair unless business was slow. At least for the first few days, he would like to stay open as late as possible.

As for the name?

“We thought it was a catchy name, probably be good for around the fair,” he said. “It’s memorable, people would probably be walking around spreading the word hopefully.”

He also said depending on how this year goes, he’ll open up again next year and said he was “having a blast” this year. He’s also learning more about the coffee-making process.

“Before I started doing this and making the cold-brew and everything, I guess I had no idea how much goes into say your mocha drinks or some of those drinks and how much you can tweak the flavors,” he said. “There’s just limitless amounts of things you can do.

“I’m really excited. I’ve got some good recipes this year, but I’m hoping even in the future to make some better ones and keep getting more advanced with the flavors and everything.”