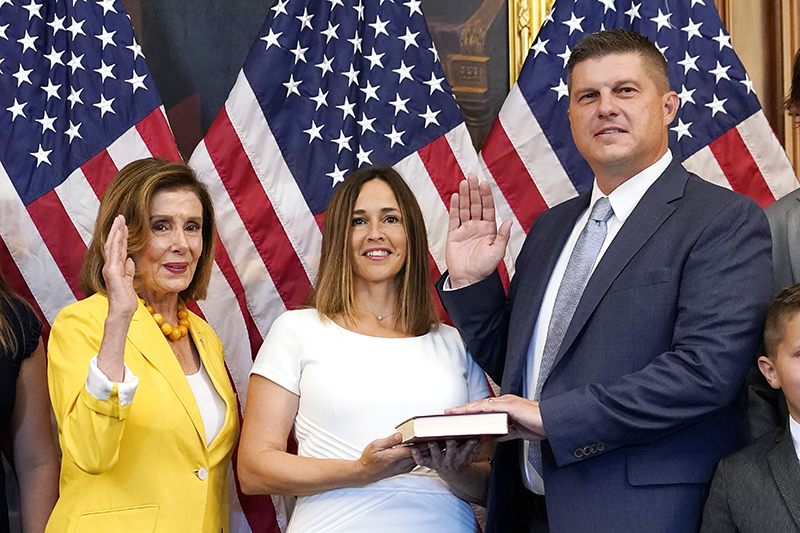 WASHINGTON — Minnesota Republican Brad Finstad was sworn in Friday as the newest member of the U.S. House, giving the GOP one more seat, which means Democrats can’t afford to lose more than four votes on close issues like their flagship climate change and health care bill.

Democratic Speaker Nancy Pelosi held a ceremonial photo op afterward with a smiling Finstad, who was surrounded by members of his large family, including his wife, Jackie, and their seven children.

“It’s a special day for us to welcome a new member of Congress, Mr. Finstad, and his beautiful family,” Pelosi said. “As I said to the children, what we do is all about them, all about the future.”

Finstad, a former state representative from New Ulm who served as state director for USDA Rural Development during the Trump administration, won a special election Tuesday to fill out the remaining months of the term of the late Republican U.S. Rep. Jim Hagedorn, who died of cancer in February.

“People in my district sent a farmer to Congress,” Finstad said in a statement. “As a farmer, we wake up in the morning and don’t wonder if something will be broken during the day; we know something will be, so instead, we wonder how we will fix it. I will come to work every day in Congress with the intention to do everything I can to fix things.”

Finstad will face a quick rematch in November for a full term against his Democratic opponent, former Hormel Foods CEO Jeff Ettinger, who came within 4 percentage points of winning Tuesday in their Republican-leaning southern Minnesota district.