New Alden-Conger principal excited, anxious for the start of the school year next month 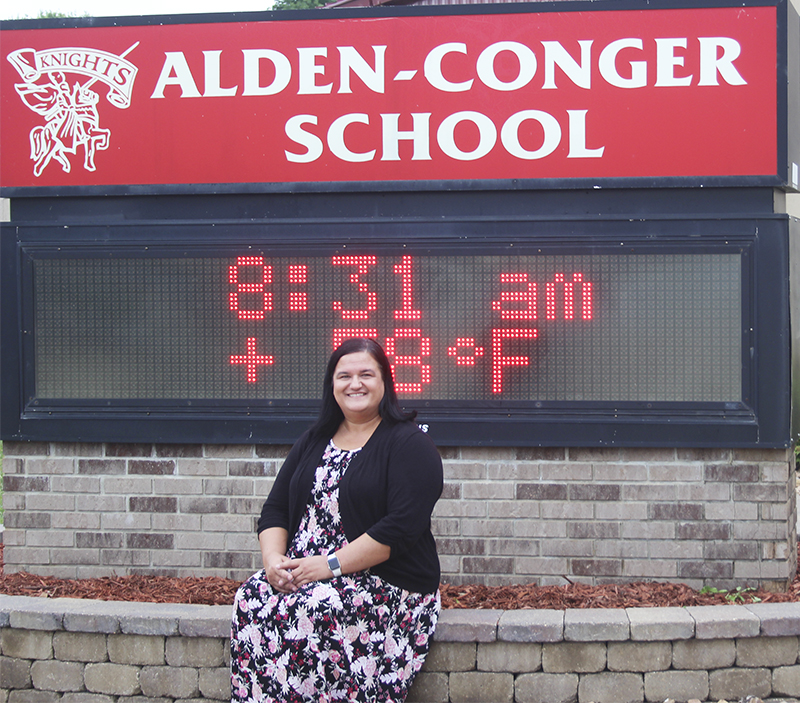 Jenny Hanson, who has been at her new role since July, is the new pre-K- to 12th-grade principal at Alden-Conger School. Alex Guerrero/Albert Lea Tribune

ALDEN — Students at Alden-Conger School will see a new face when school starts again Sept. 6 when Jenny Hanson takes over from Paul Ragatz, the longtime sixth- to 12th-grade principal who recently retired.

She started July 1, but though she’s new to the position she is very familiar with the area.

“I originally graduated from high school here at Alden-Conger,” she said.

But after high school and a few years away from the area, she decided to move back and became a teacher in the district for eight years, where she taught family and consumer science courses, technology and computer courses at every grade.

She then served as the early learning coordinator at Albert Lea Area Schools, where she worked for 11 years. During that time, she decided to pursue a master’s, a principal’s license and a licensure in community education.

Hanson lives in Albert Lea, but admitted the opportunity to return to administration in a small town was too tempting to pass up.

“I knew that there was high-quality staff that was still here, ones that I had worked with previously and was very excited to come back to kind of the place where the bulk of my teaching had started,” she said.

Hanson pointed out that growing up in the area, attending school and then teaching at the district meant she knew the community. She also felt her administrative experience in Albert Lea made her a good fit for the position.

“Just the small-time atmosphere and the support that you get from parents and families and being a cohesive environment, that’s appealing to me and why I kind of decided to return here,” she said.

After graduation, Hanson attended South Dakota State University, where she earned her bachelor’s and taught for a few years before she and her husband moved to Albert Lea.

Her biggest goals for the district include curriculum mapping and a focus on elementary literacy.

“The teachers have been very diligently working on a letters curriculum, and so [overseeing that ] being implemented and carried out throughout the elementary,” she said.

Her other goals include emergency preparedness districtwide and learning about parents and families. She also wants to create a welcoming environment for students and families by having a high-quality education where teachers feel supported.

As for the new job, she said the past month has been a combination of familiarizing herself with the district and learning about what has changed.

“It’s nice in that a lot of the staff is the same from when I was a teacher here, but there are definitely new faces,” she said. “They have done some new things that they’ve implemented since I had previously been here.”

So far, she likes the atmosphere and said it’s been like “coming home” with her ability to recognize people.

She described her educational leadership style as encouraging accountability through active support and involvement. To that effect, she would like to bring some of the resources, networks and connections from Albert Lea to her new role.

“That just means I am eager to help out wherever I can and I will step in and assist in classrooms or serve as a substitute in classrooms if needed,” she said. “Kind of that hands-on sort of person who’s willing to do all the different work and responsibilities that I would ask of my staff.”

Hanson, who also taught at Glenville-Emmons, first became interested in education when she was little and remembered playing the role of teacher.

“I think the ‘Aha’ moment that you see in children when they learn something new is exciting and rewarding,” she said. “That’s just something that I’ve been drawn to.”

Hanson and her husband live in Albert Lea and have three children. She is a grandmother, enjoys walking, being outside and attending sporting events. She also does Dollar Tree crafting.

“I’m super-excited to start the school year,” she said. “We’re anxious to get going and I look forward to … meeting students and parents and just working together to provide the best education that we can,” she said.