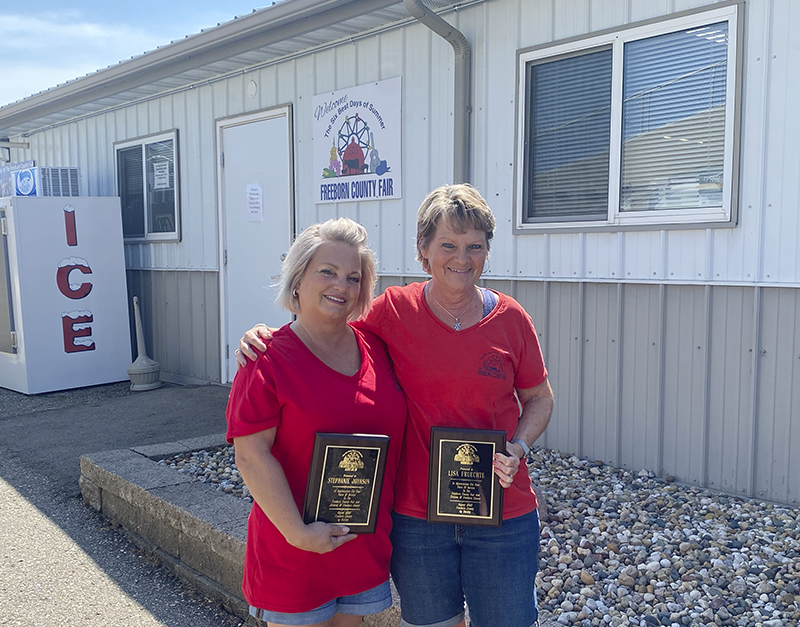 It’s normally hard to keep anything from Lisa Freuchte and Stephanie Johnson, office manager and assistant manager at the Freeborn County Fair.

But on Tuesday night, the women said they were surprised when up in front of the crowd before the Neal McCoy concert the fair board co-named them Fair Person of the Year.

“I was so shocked I didn’t really hear what he had to say,” Freuchte said of when the award was announced.

The two Albert Lea women both started working in their roles the same day in July 2017 after being approached by a board member about the opportunity.

Freuchte said she had moved back to Albert Lea in 2015 and wasn’t working. She grew up in 4-H and her dad was a fair board member, and the board member asked if she would be interested in coming in and doing some part-time work. And it just took off from there.

Other than when she goes South for the winter, she can be found at the fair office throughout the year. She said it’s slower at the fairgrounds from September through March but then things start picking up.

“And then once April comes it starts snowballing, and then all the sudden it’s fair time, and then you’re starting over again for next year,” Freuchte said.

Johnson said she has always loved the fair and came on part time as well. She is there year-round — though she only works minimal hours in the winter when she helps people who need to rent out buildings.

“Plus we’re getting ready for the fair all year-round,” she said. “Once the fair’s done we start over.”

Their work involves getting the contracts ready with all of the inside and outside vendors, ordering all of the tickets, getting the fair book ready, heading up online entries and open class entries and working with superintendents of the exhibit buildings, among other duties.

“I love seeing it starting at just nothing and all of the sudden it just develops, and there’s always bits and pieces that come together — it’s just amazing,” Johnson said.

The week of the fair, if someone has a fire that needs to be put out, that usually gets directed to the fair office, and they then will bring in the board members.

During the week of the fair, the women also have the assistance of three other part-time workers, Judy Carroll, Anne Jerdee and Karen Hansen, to help answer questions from the public and help out with other issues at the fair.

Johnson thanked the community for supporting the fair, and the women also recognized Margo and Milton Wayne and their son, Travis, for what they said has been an invaluable contribution to the fair.

They said the Waynes are there to help whenever it is needed. Travis Wayne is also the caretaker, and Milton Wayne just started as groundskeeper.

And the women said none of their work would be possible without the fair board and the superintendents.

“I really don’t think the public understands what it takes for these volunteers to put this fair on,” Freuchte said.

Freuchte has announced she will retire after the fair this year and looks forward to spending more time with her husband during the summers.

She still questions how she didn’t know about the award ahead of time.

“I know everything that goes on at this fair,” she said. “How this could have happened — it’s just beyond me, because my hand is in everything. It’s a big honor.”