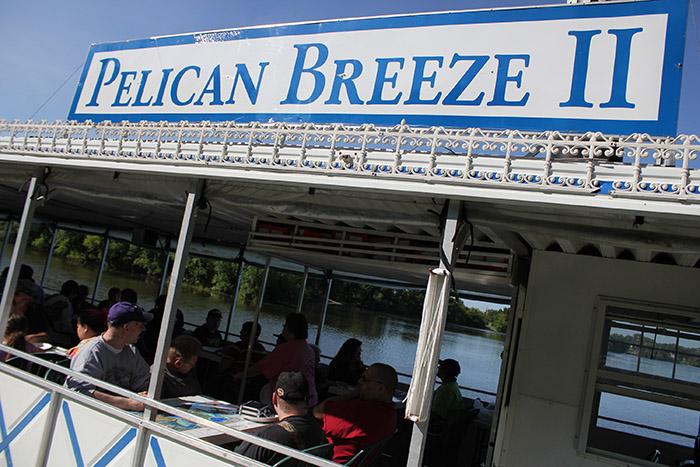 According to Jean Eaton, the director of the Albert Lea Convention and Visitors Bureau in 1996, she was told to find a project covering a $25,000 certificate of deposit that needed to be cashed in.

So she reflected on an activity she had recently done.

“I had recently been on a boat in Ortonville … and loved it,” she said. “I thought, ‘What a way it would be to promote Albert Lea and to showcase the lake.’”

So Eaton called the CVB director in Ortonville and inquired about the price of the 45-passenger double-decker boat.

“It had to be a pontoon boat because we were going to be on Albert Lea Lake, and the lake’s only 3- to 6-feet deep,” she said.

Coincidentally, that boat happened to be for sale for $25,000, so she took it as a sign, and the city bought the boat and moved it to Albert Lea Lake.

“We chose Albert Lea Lake because people would go by Albert Lea Lake, over 35,000 a day, and wonder what’s wrong with Albert Lea,” she said, referring to the lack of boating activity on the lake. 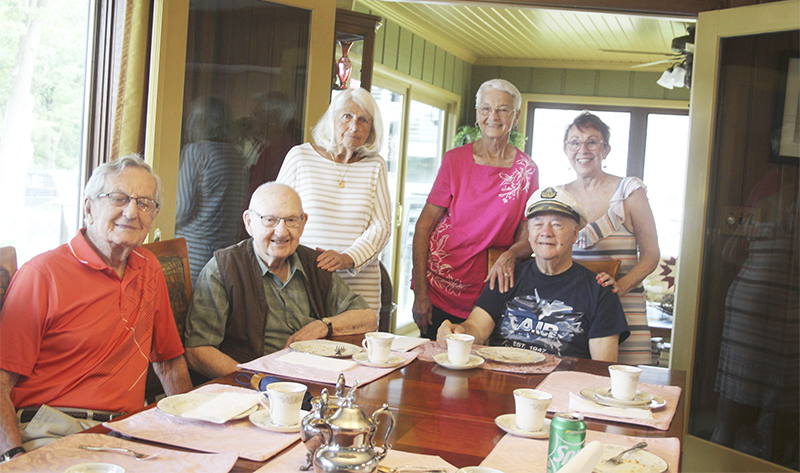 According to Eaton, it took “a lot of work,” as she worked with the city, the Department of Natural Resources, the Coast Guard and the state for licensing.

Eventually the city put a dock in and helped with the boat’s move.

Eaton spent that entire first winter worrying about whether or not the Pelican Breeze would be able to get under the bridge, and she had her husband go out with her to measure the bridge and determine if they could use the whole lake.

Once she learned the boat would be able to navigate the lake, it was time to find people to work on it.

“It took me all year (1996) to find these wonderful people, get all of our licensing, our PR, everything,” she said.

One of her first calls was to Dick and Marlys Webber, whom she described as being active on Albert Lea Lake.

Dick Webber became the boat’s admiral. Paul and LaVonn Stieler were chosen as a captain and first mate, along with Ross and Mary Williams, Bob and Vicki Severson, Tom Eaton, Terry Stumme, Roger Traux and Neil and Linda Opstad.

Just because they had a crew did not mean they could immediately set sail.

“We had all these people, they had to go and take a test,” Eaton said, referring to a maintenance test in order to get a boilermaker license.

But with their captains and first mates eventually secured, all the captains needed to be trained and first mates had to be able to clean the portable bathroom before getting on the lake. And while the crew was excited about the upcoming work, not everyone was thrilled with their newly-assigned tasks.

According to Marlys Webber, after Eaton offered Dick Webber a captain’s position, he promised his wife he would clean the bathroom.

Eaton then called Roger Lonning to help with creating the narration for the tour.

“Roger was so involved in the Historical Society that he researched Albert Lea lakes, so we have the history, we have the fish and the wildlife, the chicken shack out there, the dam, New York Point, ” she said, referring to potential points-of-interest on the boat tour.

And for a while things were good.

“We had a lot of private cruises,” Eaton said. “We had birthdays and anniversaries and reunions. We had weddings, we had funerals and it was just wonderful.”

There were even church services.

But in 1998 Eaton was informed that the boat couldn’t be owned by the city, and the Pelican Breeze became a 501(c)3 nonprofit, the Pelican Breeze Foundation, with Linda Phelps serving as treasurer for 25 years and Peter Phelps helping out with boat maintenance over the years. For the last 25 years, the Pelican Breeze has operated with the service of volunteers.

Wayne Dierks has worked with the Spark Plug Tour.

“He would bring busloads of tourists, he would pick them up on the highway looking like a bum, get on the bus and bring them to our boat,” she said, referring to his work with bus companies around Minnesota, Iowa and Wisconsin.

In fact, she said the boat tour was so popular it has brought in people from almost every state and visitors from over six countries.

According to Eaton, there were 65 tours one year, and she thinks the boat was out every day.

They also bought a new boat, and sold the first Pelican Breeze to a couple on the Mississippi, who in turn sold it to a film company in Hawaii and was used in the Hawaii Five-0 remake with Alex O’Loughlin, Grace Park and Scott Caan that aired on CBS for a decade.

“Pete Phelps found the new boat in Michigan,” Eaton said. “So Tom [her husband] and I went to look at it. It was a one-owner boat. They took such good care of it. It had its own garage.”

The new Pelican Breeze is one level with smoke stacks and seats 60 passengers. It also had a bathroom with a flush toilet, though before taking it out new tables and new lifejackets were needed.

No matter what iteration, the Pelican Breeze, according to Eaton, helped the area in more ways than tourism.

“I think we’ve been told that we’ve helped develop Albert Lea Lake with people remodeling their homes and building new homes out there and cleaning up the lake,” she said.

Currently the Pelican Breeze is looking for first mates, captains, narrators and volunteers. Anyone interested in helping should visit their Facebook page — PelicanBreeze —  or their website, pelicanbreeze.org.