Relay for Life returns to fairgrounds in fight against cancer 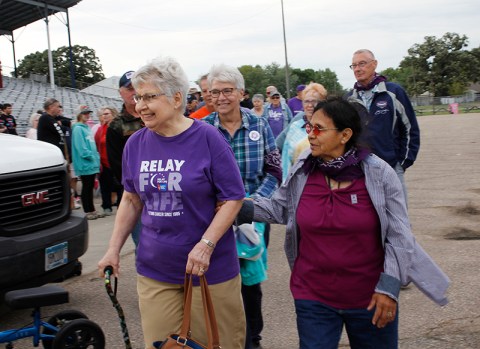 The first lap to look at the bags was taken by the cancer survivors and their caregivers Friday during the Freeborn County Relay for Life. Marissa Hanson/Albert Lea Tribune 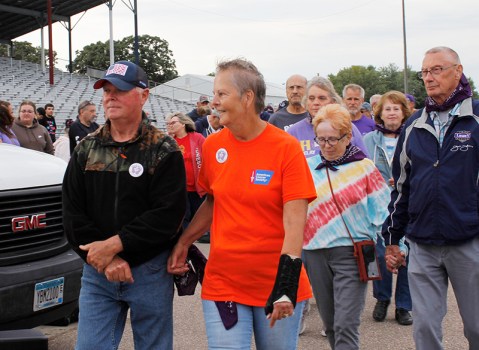 Dean and Diane Hanson are both survivors and are heavily involved in the Relay for Life. Marissa Hanson/Albert Lea Tribune 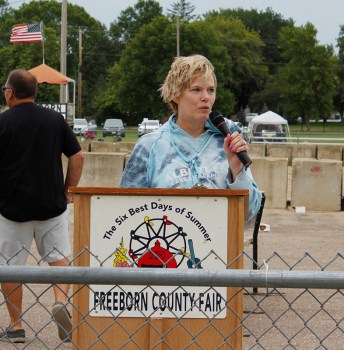 Sheri Jenson is the chairwoman of the Relay for Life in Freeborn County. Marissa Hanson/Albert Lea Tribune 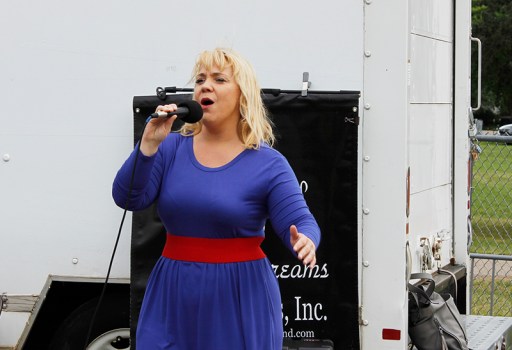 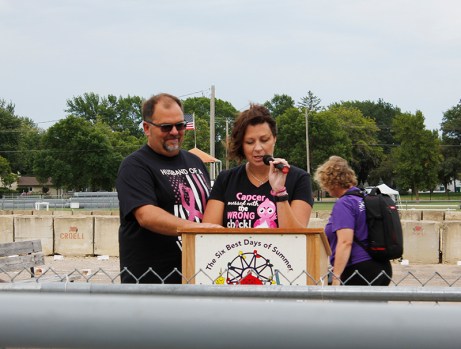 Danielle Schipper was the honorary speaker in the opening cermony. She is a survivor of breast cancer. Both her and her husband, John, spoke to the crowd about her cancer journey from their perspectives. Marissa Hanson/Albert Lea Tribune

The event officially started at 6 p.m. Friday with the opening ceremony, followed by the survivor walk to start off the night. That isn’t when the day started though; it started earlier that morning with people setting out the luminarias, setting up their campers or booths and lots of volunteers doing whatever they can to make the day go smoothly.

The Relay for Life is a fundraiser event built by communities. The money they raise then goes to the American Cancer Society.

The Relay for Life is centered on signature elements of celebrating both cancer survivors and their caregivers and remembering and fighting back.

The opening ceremony consisted of several things, including the American Legion Color Guard presenting the flags, Carrie Boyer singing the national anthem and speeches by Shari Jenson, the chairwoman of the Freeborn County Relay for Life, Don Malinsky and cancer survivor Danielle Schipper and her husband, John.

Following the opening ceremony was the survivor lap when everybody could look at the decorated bags.

Part of the fundraiser is the selling of bags before the event that people decorate in honor of a survivor or in memory of someone lost to cancer.

Another way they raise money is by fundraising money to donate before. Teams do this in various ways from straight up asking for it to being a little more creative when it comes to Diane Hanson’s group.

Her group, called Zion’s Beautiful Feat, does something called “flocking,” where they take a bunch of yard flamingos and a sign and put them in someone’s yard. The person who lives there pays for the flamingo removal (a donation), and they come and pick up the flamingos and sign and repeat. Their fundraising idea went quite well with them being the top group in the event with $6,127 of funds raised.

According to the Relay for Life website, $14,213 has been raised so far, not including funds raised from a silent auction during the event, a pancake breakfast Saturday morning and a 50/50 drawing.

“I would definitely say it was a success,” Jenson said. “We got hundreds and hundreds more luminaries this year compared to last.”

Returning to the fairgrounds was a big deal to many including Jenson.

“I am super excited to be back at the fairgrounds … that was the one big thing I wanted to do this year,” she said.