Kasey Wolters is a native of Albert Lea, a graduate of the school system and has lived in the area her whole life. She is also a mother whose child attends Albert Lea Area Schools and has a vested interest in her child’s education. 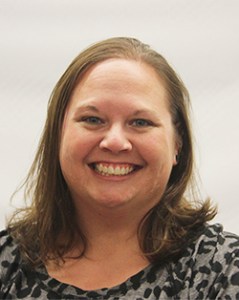 “I have a vested interest in what’s going to happen in the next 10 years, 15 years, and so I want to jump in now so I can be effective,” she said.

And that’s part of why she decided to run for one of four open seats on the school board.

“I’ve been thinking of running for school board for over the last year,” said Wolters, who works in loan servicing for mortgages at AmeriNat. “I’ve been attending school board meetings and felt like the board needed to have a parent’s voice be heard on that board.”

She also noticed no one on the current board had a child in the district who could express concerns about mental health, school safety and drug use, which she said had been happening at schools.

“I feel like having another perspective from a parent’s point-of-view would be helpful to be able to ask questions and collaborate more with other board members,” she said.

And even though some current members had children in the district at some point, she felt enough time had passed and things changed that a current parent could bring a different perspective of the current happenings.

She said that as a parent, she had constant communication with teachers, asked questions and received answers that may otherwise be “conveyed to administration” differently.

She was also trying to be more involved and asking questions at current board meetings.

She felt her minimal experience in the field of teaching made her “the average citizen” and would allow her to ask questions if she did not understand procedures or policies.

Wolters believed her experience in finance, particularly budgeting and finance, could help. She was also proud of her customer service skills and admitted she handled questions, concerns and complaints.

If elected, her top priority is to communicate and serve as a liaison with parents/families and staff, teachers and administration.

She also would not go into the role saying “a lot of changes” needed to happen. In fact, she wants to be part of new superintendent Ron Wagner’s goal of moving the district forward.

Wolters was also proud of the district’s College in the Schools program and wanted to build on it to keep students in the area after graduation.

Wolters liked the diversity of the current board’s composition, and said diversity was important to getting opinions and angles.

“I think there are a lot of good things happening,” she said. “I’m really excited to hear the new superintendent with his goals and his vision for what’s to come.”

But she also felt the board needed a parent, and said that even when a parent addressed the board they wouldn’t always get a “full” answer, response or opinion from everyone.

“There’s some lack of communication sometimes,” she said.

This will be her first time running for school board.

“I am a parent, and [am] willing to listen and put in the hard work and work hard for the people of Albert Lea and for the students and staff of the district,” she said.