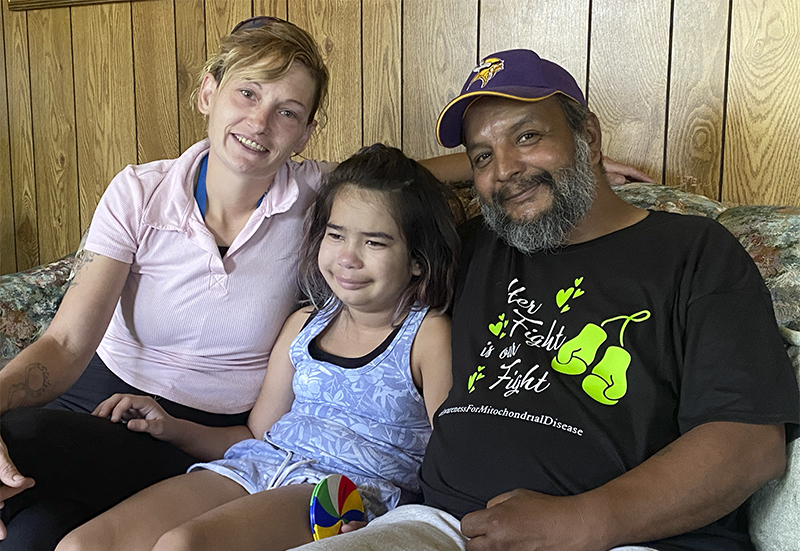 A birthday fundraiser will be on Saturday at the Albert Lea Eagles Club for Kiara Espinosa, center. Here, Kiara is pictured with her mother, Julie Ashenfelter, and father, Mike Espinosa. Sarah Stultz/Albert Lea Tribune

The then 9-year-old girl, who loves to draw, swim and play outside, was rushed to Rochester, hospitalized and six days later was diagnosed with a rare Mitochondrial Complex 1 deficiency.

She was the 197th person in the world to receive the diagnosis, her mother, Julie Ashenfelter, said.

While there are 10 to 12 other types of mitochondrial deficiencies that are able to be managed with daily routines, for Kiara’s type, that’s not the case — it’s incurable, Ashenfelter said.

The now soon-to-be 11-year-old travels at least a couple times a week to doctor’s appointments for the disorder and deals with many other hardships as it unfolds.

To raise money for Kiara’s family and help wish Kiara best wishes on her approaching birthday, there will be a fundraiser from 1 to 6 p.m. Saturday at the Eagle’s Club in Albert Lea.

“Our purpose is to show love and support to Kiara while throwing her an awesome birthday fundraiser to also help raise money for her medical expenses,” the flier for the event states. She will turn 11 on Aug. 18.

The fundraiser includes food, a live auction, bake sale, cribbage and pool tournaments, a 50/50 raffle, a carnival and more.

According to information provided to the family about her condition, mitochondria are structures within cells that are responsible for producing energy. With the disorder, Kiara makes energy less effectively and efficiently than other people, which can lead to problems, especially when she needs energy the most. On top of daily living, stress to her body increases the amount of energy her body needs to produce, and can lead to a crisis where acid builds up in the body and the cells run out of energy. This could lead to brain injury or other organ failure.

“When her levels get low, lesions start to develop on her brain,” her mother said. “In the last year, she has had five different episodes where she’s had different sets of lesions.”

Ashenfelter said in some places Kiara’s brain is essentially starting to dissipate, and in the last few months, Kiara has started losing her vision. She has lost her vision completely in her left eye and has mostly lost her vision in the right eye, too, though she does have some partial intermittent break-through vision.

“I try to tell her at least once a day that she’s my hero because half the stuff that she goes through and has to do on a daily basis, I couldn’t do it. I flat out tell her that,” Ashenfelter said. “Even on her worst day when she’s really depressed and very angry, and doesn’t know what to do, if someone else is upset … or she can sense that I’m struggling with it, she pushes all her emotions aside and tries to make the other person better. She’s just a very caring, compassionate, loving little girl.”

Ashenfelter said doctors have essentially told the family it is “when” not “if” the young girl has another episode. She has also started developing focal seizures.

Kiara’s father, Mike Espinosa, said his daughter is on 32 medications per day, and if she does not take those medications or eat certain foods, she has problems with her levels, leading to additional issues.

Though doctors were against Kiara continuing to go to school, the parents said Kiara does go to school part-time. She lives with both her mother in Clear Lake, and her father in Albert Lea.

Despite the challenges Kiara faces, her father said she wants to get the word out to others about mitochondrial disease and let people know to not be afraid of it and that they’re not alone.

“There are other people facing that same challenge,” he said.

Kiara and her parents are planning a trip through the Make-a-Wish Foundation to San Diego next month, where Kiara will get to swim with sea otters, visit the San Diego Zoo, drive down to the ocean and spend a day at SeaWorld. They are also hoping to connect with the doctor on “Dr. Pimple Popper,” who Kiara and her father used to watch on TV regularly.

In addition to the trip, the family has worked with some local groups to make some Kiara’s other dreams a reality, including Jim Hanson with the Albert Lea Airport, who will give her a ride in a plane over Albert Lea later this month, and veterinarian Robert Bogan in Blue Earth, who is teaching her more about being a veterinarian.

Mike Espinosa said he and Kiara went to Bogan’s office last week, where she was able to help with the animals and keep them calm as they got their vaccinations. He also shared more about becoming a veterinarian and the training required for the position.

The money raised from the fundraiser will go to support the family as they drive her to and from medical appointments and for the supplemental medications and vitamins not covered by insurance.

People unable to attend the event can donate to the family through Kiara’s GoFundMe page. It can be found by searching for “Kiara Espinosa” on www.gofundme.com.