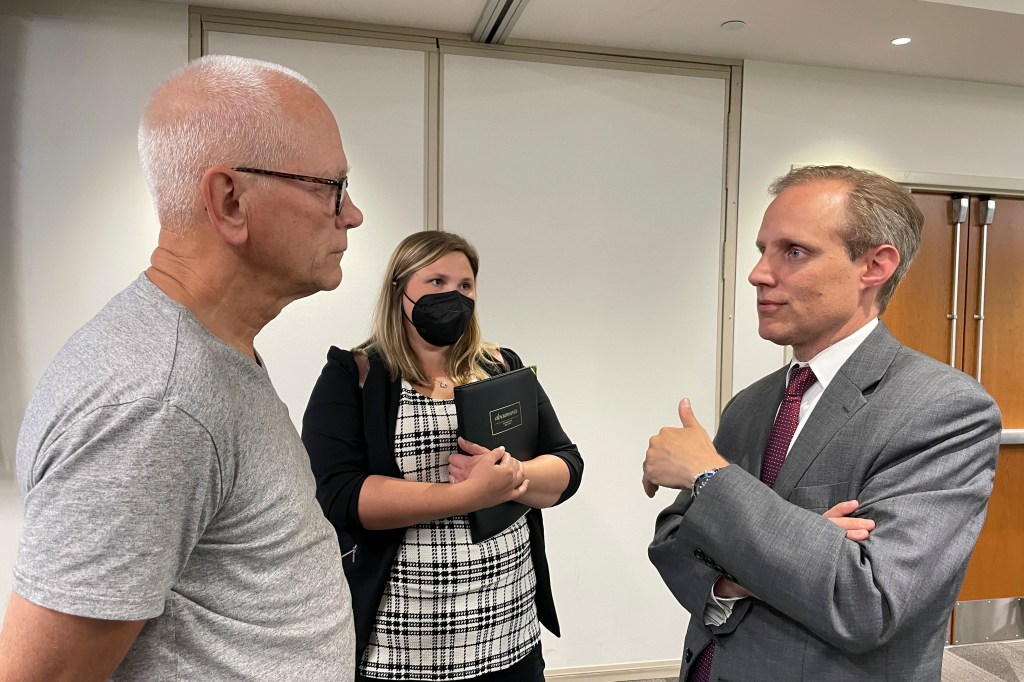 Dakota County resident Mark Davis, left, raises his concerns about election integrity to Secretary of State Steve Simon, right, and Press Secretary Cassondra Knudson, center, in Burnsville on Wednesday at an event for public accuracy testing of voting machines. Simon visited a suburban Minneapolis elections office on Wednesday for a public display of tests on voting equipment, part of a continuing effort to persuade voters that they can have confidence in the accuracy and security of elections as the state's primary looms next Tuesday. AP Photo/Trisha Ahmed

BURNSVILLE — Secretary of State Steve Simon visited a suburban Minneapolis elections office on Wednesday for a public display of tests on voting equipment, part of a continuing effort to persuade voters that they can have confidence in the accuracy and security of elections as the state’s primary looms next Tuesday.

Simon answered questions and walked around the lower level of Burnsville’s City Hall as more than two dozen people joined election workers around three voting machines to learn how the equipment works.

“The number one threat to our democracy in America is this cloud of disinformation about our elections,” Simon said. “So it’s up to me and everyone who touches elections to talk about what the facts are and what the system is.”

Former President Donald Trump’s repeated false claims of a stolen 2020 election have taken root with some voters who say they don’t believe Joe Biden is the legitimate president and they no longer trust the country’s election systems. Simon is among elections administrators around the country who have warned that such rhetoric is undermining democracy, and devoted significant time to educating voters on how elections work.

Simon’s office has added material to its website, Minnesota Elections Facts, that works toward that goal as it trumpets the state’s regular status as one of the top-voting in the country, with such sections as “Fact and Fiction.” (Sample fact: Every ballot cast in Minnesota is associated with a registered, eligible voter. Sample fiction: Hand-counting ballots is a viable way to conduct an election.)

Simon and Machael Collins — the city clerk and election administrator for Burnsville — ran through a series of legal requirements that they said help ensure the accuracy, reliability and security of voting. Jurisdictions have to conduct public accuracy tests of equipment before every election, for example. The equipment has to be certified at the state and federal level. Election judges from different political parties must be allowed to observe. And voting equipment has to demonstrate it can catch ballot errors.

“There’s so many checks and balances — people just don’t know that they’re there,” Collins said.

Still, a couple attendees raised concerns to Simon and Collins about election integrity.

“Their voter registration is supposed to show ‘Deceased,’ so nobody else can vote in their name. But receiving these postcards tells me that this process didn’t happen,” said Flodin, who works as a volunteer election judge in the same county but at a different polling location. Simon told Flodin he would look into the issue.

Mark Davis, who said he worked in the information technology industry for nearly 30 years before retiring, asked to see how election administrators would use Verizon 4G cards to transmit results. Collins said the cards had not arrived yet and that showing the transmission is not part of the public accuracy test.

“It’s a new way to transmit the results,” Collins said in an interview later. “At the end of election night, the county gives me an abstract of every count for every precinct for every candidate, and I can put that against my count that I take off the paper tapes. And if they don’t jive, then we know something’s wrong. But they do jive.”

Collins added that precincts are also randomly selected around the state to be audited after the election, where it is verified that the hand-count in certain races was the same as the ballot count and the transmitter count.

Simon, a Democrat, faces his own re-election battle this election season. His likely opponent is Kim Crockett, a Republican who has questioned the 2020 presidential election results and called to roll back changes that have made it easier to vote in Minnesota.