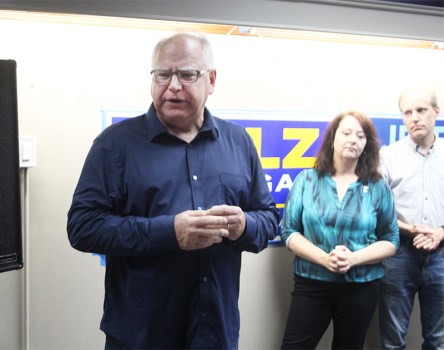 Gov. Tim Walz tells the crowd he is proud they look out for their neighbors. Alex Guerrero/Albert Lea Tribune 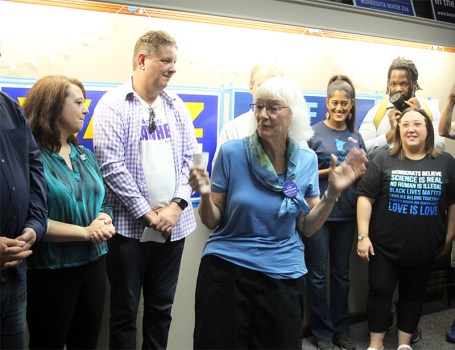 The weather outside wouldn’t dampen the spirits of those who attended a voting rally Saturday afternoon with local and state Democratic candidates at the Freeborn County DFL headquarters.

“We are here today for those who are fighting it out in the trenches,” said Terry Gjersvik, who ran for District 27A Minnesota House of Representatives, in the opening remarks for the rally. The rally came three days before Tuesday’s primary and special elections.

Shivanthi Sathanandan, second vice chair of the Minnesota DFL, kicked-off the event by thanking those in attendance/.

“The work in front of us is so critical, and every one of you are really the most important people in this room because the work that you are doing is changing lives across our state,” she said. “Families like mine depend on you. Families like yours depend on all of us, all of us here.”

Sathanandan then introduced Mary Hinnenkamp, who is running for state representative for 23A.

“What’s interesting is what you hear at the doors,” Hinnenkamp said, referring to her conversations with people while out knocking on doors. “… People are concerned about fully funding public education. They want access to affordable health care, child care and paid family leave.”

She also said during her conversations she learned people wanted lower prescription drugs, along with broadband access.

“There are farmers that want climate-smart farming practices, but they need incentives for that because they need to survive as farmers,” she said.

She said people were concerned about democracy, and especially women’s health.

Brandon Lawhead, a candidate for Senate District 23, encouraged the crowd to get out and vote to ensure women had the right to bodily autonomy.

“In the history of our nation, only a few generations have been granted the role of defending freedom in its hour of maximum danger,” he said. “I don’t shirk from that, I embrace it.”

He then told the crowd Steve Simon, the secretary of state of Minnesota, and Gov. Tim Walz were facing one of the most difficult times in the history of Minnesota.

“I really truly believe that Gov. Walz and Steve Simon will go down as two of the great public servants in the history of this state, ever,” he said. “It’s critical we get out there and vote for them.”

State Auditor Julie Blaha, whose job she described as overseeing $60 billion in government spending, said being at rallies was what she loved.

“Over the last two years we can thank local government for keeping us out of economic free-fall,” she said. “We got resources in the hand of local government, they got it into the hands of the people.”

She then said the upcoming vote was about the freedom to make a local decision, which is what she said she was protecting.

“I know that when you get to lead on the decisions in your community, that’s when we get things that work,” she said.

Steve Simon, the Minnesota Secretary of State, asked the audience if they were ready for voting on Tuesday, to which they emphatically responded they were.

“In our lifetimes, the stakes have never, ever been higher for the democracy business,” he said.

In talking about today’s challenges, he said the “coordinated disinformation about our democracy, about our election systems,” was a poison.

“What makes this kind of disinformation about elections and democracy so much worse and so much different is what it has inspired,” he said. “It inspired an attack on the United States Capitol on Jan. 6, 2021.”

He also argued the disinformation campaign inspired attacks on statewide issues including the ability to vote.

To combat that, he suggested adopting reforms such as automatic voter registration, registration for high school students and restoring voter rights for individuals who left prison.

Walz told the crowd he was proud that they looked out for their neighbors.

“This once-in-a-generation or maybe once-in-a-century — we hope — pandemic, was hard, it was hard on everyone,” he said. “But Minnesotans do what they do, they looked out for one another, and now when the dust starts to settle a little bit, Minnesota ranks as one of the 10 states with the lowest death rates.”

According to Walz, Minnesota also has the lowest unemployment rate, fifth-highest job growth and was listed the best state for children’s safety during the pandemic.

Walz made a point of saying that while the state rated first in public education, they needed to do better for children of color.

“It’s tough right now,” he said. “It’s frustrating, we have a state surplus that could ease the pain of Minnesotans, could invest in our schools, could lower property taxes, could eliminate the Social Security tax.”

He was also proud to say he had never raised taxes as governor or issued a veto, and said compromise was good.

At the same time, he admitted there was an economic downturn but said the solution was not to blame the other party.

He then turned it over to Jeff Ettinger, who addressed the crowd over the phone because of COVID-19. Ettinger is running for the 1st District U.S. House seat.

“This Aug. 9 election is particularly important to me because it will be very helpful to be the incumbent starting on Aug. 10 and through November as we head into the November season,” he said.