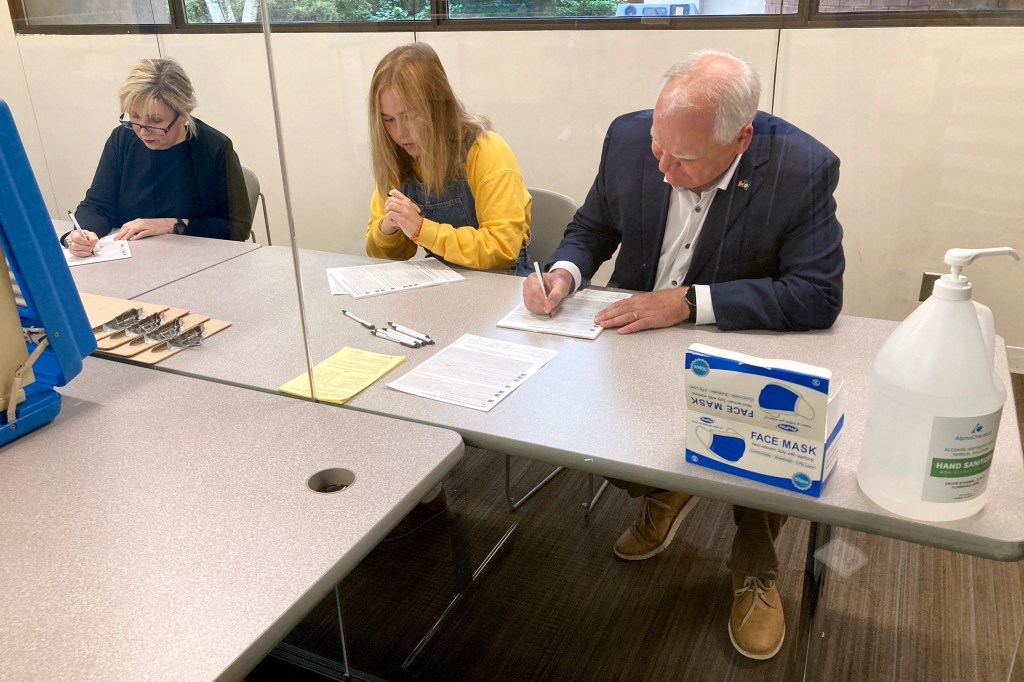 ST. PAUL — Gov. Tim Walz took advantage of the chance to vote early in Tuesday’s primary, then joined a fellow Democrat, Secretary of State Steve Simon, on Monday to defend the integrity of Minnesota’s election system.

Walz, accompanied by his wife, Gwen, and his daughter, Hope, went to the Ramsey County elections office to fill out his ballot and feed it into the tabulator. The incumbent’s 21-year-old daughter said it was her first chance to vote for her father because she was too young by two months when he first ran for governor in 2018.

“Minnesota has the fairest, the most secure and the largest-turnout elections in America,” Walz told reporters afterward to counter attempts by Republicans to cast doubt on the validity of the process and the outcome of the 2020 elections. He later added, “The outrageous statements around our elections are undermining our democracy.”

Walz singled out a comment by Simon’s presumptive Republican challenger, Kim Crockett, about a state court ruling that made it easier for people with disabilities or whose English proficiency was limited to get help filling out a ballot. In a 2020 interview on KTLK-AM, resurfaced by the Huffington Post last week, she said the ruling “raises the question, um, should they be voting? We can talk about that another time.”

Crockett said her comments were “completely taken out of context.” She tweeted Saturday that she was talking about protecting vulnerable voters from those who might try to influence their votes under the guise of providing assistance.

Walz called her remarks “un-American.” Walz also ripped his own likely GOP challenger, Dr. Scott Jensen, for suggesting Simon should be jailed for rule changes he made to facilitate voting from home amid the COVID-19 pandemic.

Jensen made his remarks at a party meeting in the spring, saying Simon had gotten away with too much for too long, but he provided no evidence that Simon had done anything illegal. Courts have repeatedly upheld the rule changes.

Simon criticized Crockett for pushing for limits on absentee voting to make in-person voting the norm. He said absentee voting was “the very system that saved the 2020 election. Without it things would have gone much, much worse. With it, we enabled Minnesotans not to have to choose between their health and their right to vote.”

Simon said 58% of Minnesotans voted by absentee ballot in 2020, before COVID-19 vaccines became available. He said the pace of early voting has been much slower this time around. Simon said he plans vote in person on Tuesday.

Primary turnout is hard to predict, Simon said, declining to give an estimate for Tuesday. But he noted that there are some hot races on the ballot to draw voter interest, including in southern Minnesota’s 1st Congressional District, where there’s both a special general election to fill the remaining months of the term of the late U.S. Rep. Jim Hagedorn, and simultaneous Republican and Democratic primaries to set the field for the November ballot to fill Hagedorn’s seat in the next Congress.

Other closely watched races include the statewide Republican primary to choose an opponent for Democratic Attorney General Keith Ellison. The GOP-endorsed candidate, Jim Schultz, is trying to fend off a challenge from the right by Doug Wardlow, general counsel at MyPillow and an ally of its founder, Mike Lindell, a leading booster of false claims that the 2020 election was stolen from Donald Trump.

Among Democrats, U.S. Rep. Ilhan Omar, one of the biggest national stars of the left, is facing a challenge from the center in her Minneapolis-based district. Former Minneapolis City Council member Don Samuels has made rising crime a key issue against Omar, a vocal supporter of the “defund the police” movement. Liberal U.S. Rep. Betty McCollum faces a challenge from her left by community activist Amane Badhasso in her St. Paul-area district.