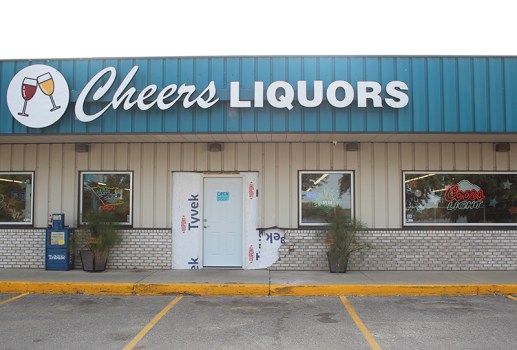 Cheers Liquor is using a temporary door until a new one can be installed after a vehicle drove up over the curb and into the building Tuesday evening, also injuring one. Alex Guerrero/Albert Lea Tribune 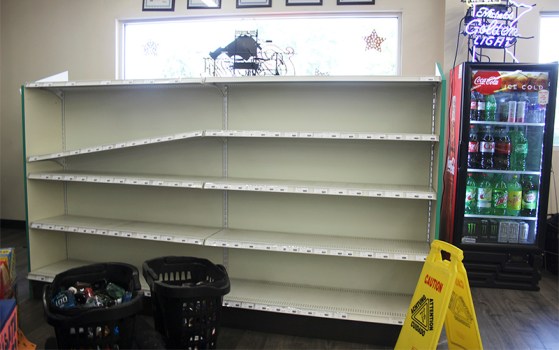 A shelf will need to be fixed, and different bottles of liquor are being stored in bins at Cheers Liquor after a motorist drove into the building Tuesday evening. Alex Guerrero/Albert Lea Tribune 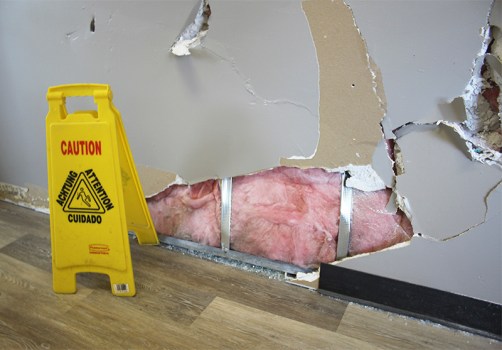 A look at some of the interior damage inside the store shows damaged walls. Heinrich estimates roughly $1,500 worth of product is lost. Alex Guerrero/Albert Lea Tribune

By Sarah Stultz and Alex Guerrero

One person was injured Tuesday evening after a vehicle reportedly drove up over a curb, struck a pedestrian and then crashed into the Cheers Liquor store in Albert Lea.

Police reports state she was struck by a 2018 Nissan Rogue, driven by Elizabeth Skov, 82, of Albert Lea.

Skov reportedly went to turn into a parking stall right in front of the building and accidentally hit the gas pedal instead of the brake.

Her passenger, Leverne Skov, 87, was not injured.

Jenny Heinrich, owner of Cheers Liquor, said one customer and an employee were inside the store at the time of the crash, but she was not present.

“It went through the front double-doors into the entryway and obviously the wall of the store,” she said.

After she received the call, she rushed down to the store and found police and ambulances surrounding the building. Glass was everywhere, and both doors were ripped off.

“The car was getting backed out into the parking lot,” she said.

The entryway and glass double-doors were damaged, as well as a shelf full of liquor.

“Basically that whole entryway is going to have to be redone,” she said.

There was also structural damage on a side wall.

Although she couldn’t guess how much structural damage was caused, she estimated at least $1,500 worth of product was destroyed.

Cheers Liquor closed at 7:30 p.m. after they managed to find a person who would close the hole in the wall.

“I’m just so grateful that we have such a wonderful community,” she said. “Mark Attig came right away and got building and was able to get it safe and secured, which was a big help so we didn’t have to worry about anybody looting,” she said, adding she received texts and calls as well.

Heinrich said Raffaele was sitting on the curb receiving medical attention when she arrived.

“My thoughts and prayers are with the driver of the car and the gal that got hit,” she said. “I hope everything is OK.”

This is the second time a motorist has crashed into the Cheers Liquor building, though the first instance was at the business’s former location at Skyline Plaza.