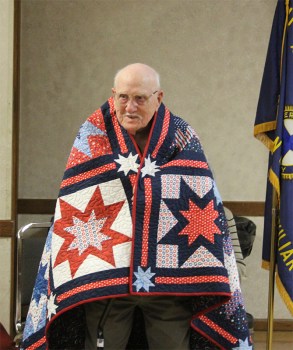 Orland Lee, who served in the Air Force, has a quilt draped around him during the Quilts of Valor ceremony. Alex Guerrero/Albert Lea Tribune 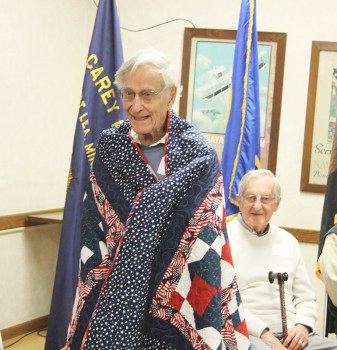 Ralph Dougherty smiles after being given a Quilt of Valor. The quilts were made by Lynda Harig. Alex Guerrero/Albert Lea Tribune 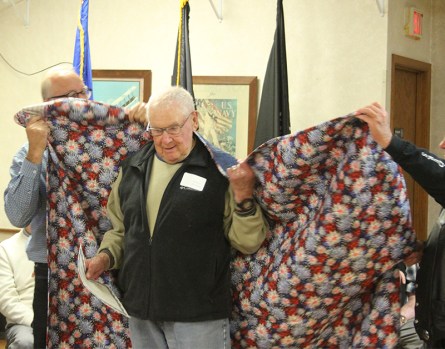 Harold Bolinger, who served in the Air Force, has a Quilt of Honor wrapped around him Friday at the American Legion. Alex Guerrero/Albert Lea Tribune 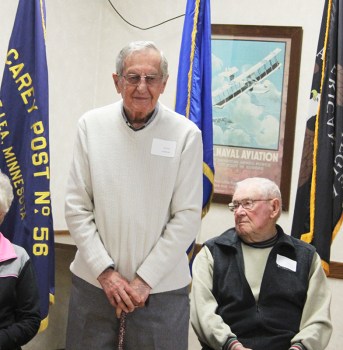 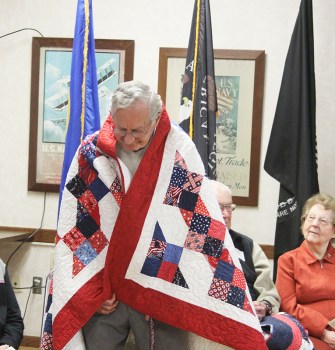 Wayne Diercks, who served in the Marines, looks down at the quilt draped around him. Alex Guerrero/Albert Lea Tribune

Originally started by Catherine Roberts after her son was killed in Iraq, Quilts of Valor has awarded over 300,000 quilts.

Bolinger, who was also celebrating his birthday, served in the Air Force from 1945 to ’46. While serving, he was stationed in Alaska as a repairman for radios and radars.

After being discharged, he worked in shoe repair and then as a clerk at Wilson & Co. He currently resides in Albert Lea with his wife.

“Today we hope to bring you honor and comfort,” said Lynda Harig, who presented the quilts to each recipient. “We may never know the depth of your service to protect and defend the United States of America.”

After receiving the quilt, he admitted he was not expecting anything and described being in the service as a privilege. He also learned he had family members who served as far back as the Revolutionary War.

Diercks entered the Marines in 1945 and served on an aircraft carrier where he did a number of different things.

After discharge in ’48, he went to Mason City, where he was married and worked at Sara Lee.

“Humbled,” he said about being at the event.

He also said he was honored to be at the event, and encouraged everyone to join for “at least a couple years.”

“We are just very proud of his service,” she said.

Dougherty served in the Navy from 1945 to ’47. While serving, he delivered coal to cargo ships that took him from Hawaii to Japan, the Philippines, Japan and Korea. After discharge he worked as a water tender for boilers.

Lee entered the Air Force in 1946 and was discharged in 1948. After discharge, he worked on a farm and then drove trucks. He has been married for 74 years.

“Thank you all,” he said after receiving the quilt.

It wasn’t just the recipients who spoke.

“A lot of times … they ask me to come and speak, I never know what the heck I’m going to say,” said Ole Olson, commander of Albert Lea American Legion Post 56.

On a lighter note, he jokingly wanted to know why the event did not have an Army representative, before thanking the four men being honored.

“I’m young compared to what the knowledge that these people have and what all that they’ve done,” he said.”It doesn’t matter what branch you were in, we all have fun with trying to kid each other about that.”

He also thanked them for giving their time to the country, something he said he appreciated.

“I can actually stand in your presence because you led the way for the rest of us to be able to take up that gauntlet and carry it for them,” he said. “I appreciate that, all of you, for the service you have presented, and all of the service that you have completed. Thank you very much.”

Besides the quilts, Bolinger, Diercks, Dougherty and Lee all received certificates.