Inkpa Mani has a new exhibit, "Maka," at the Freeborn County Arts Initiative, which will fun until the end of October. Provided 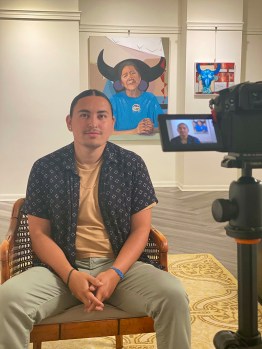 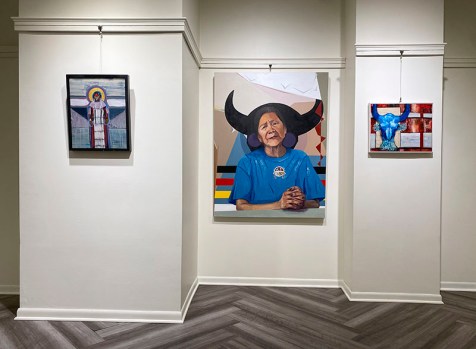 There will be a reception for Mani from 1 to 4 p.m. Oct. 29 at the Freeborn County Arts Initiative. Provided

A new exhibit is up at the Freeborn County Arts Initiative featuring a Minnesota-based Indigenous multimedia painter, sculptor and image maker.

In a press release, “Maka” is described as “an exhibition of paintings about a people in their landscape.”

He said his work tried to show the cultural aesthetics and histories of North America’s Indigenous people.

“It’s showing the relationship with land and the world view of land that I grew up with in Indigenous communities in Mexico and the USA,” Mani said. “The paintings focus in on Indigenous perspectives of land and shows that the landscape we live in is always changing and full of vibrant and subtle colors.”

He said his interest in art began around 10th grade and led him to pursue a degree from the University of South Dakota in Vermillion in 2019.

Mani, who has traveled to Washington, D.C., as part of an arts delegation, was approached by the Freeborn County Arts Initiative curatorial committee after seeing the merits of his exhibition at Two Rivers Gallery in Minneapolis.

He was also selected as the artist to do the largest commissioned art sculptor project in Minneapolis before resigning.

According to the press release, “initial pushback [for the project] came from a couple of artists who were competing with him for the job and referred to him as an outsider” and the release said the other artists described him as “the wrong kind of Indigenous,” despite the project requirements not including trial membership.

That did not deter the Arts Initiative.

“We are honored to have a selection of his work in our gallery,” the release said.

Mani grew up in northern Mexico and near Lake Traverse is indigenous to the southwestern tribes and was adopted into the Dakota Tribe. Mani and his partner have a child, and he teaches at Tiospa Zina Tribal School in South Dakota. He is also currently working on a 60,000-pound stone sculpture in Sisseton, South Dakota.

“Maka” runs through the month of October. The Arts Initiative  is open from 5 to 8 p.m. Thursdays, 1 to 4 p.m. Fridays and Saturdays and is located downtown at 224 S. Broadway. There will be a closing reception with the artist from 1 to 4 p.m. Oct. 29.