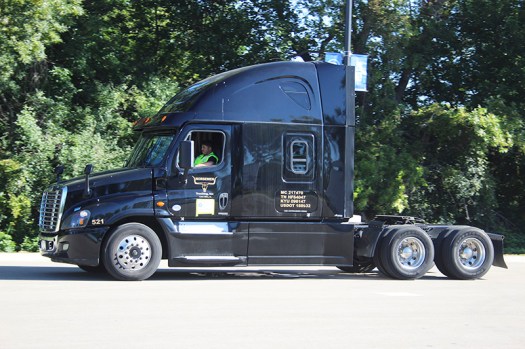 Before hitting the road, students practice the basics in a large, empty lot next to campus. Alex Guerrero/Albert Lea Tribune 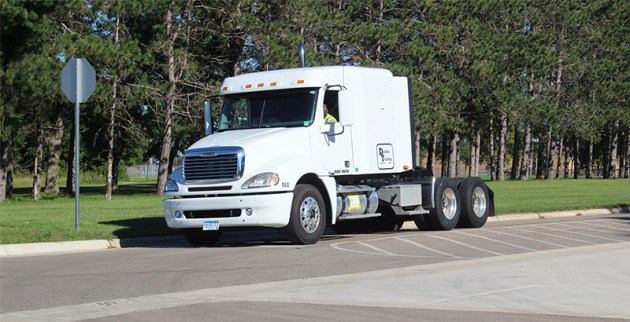 A student practices around campus without any type of trailer. Alex Guerrero/Albert Lea Tribune 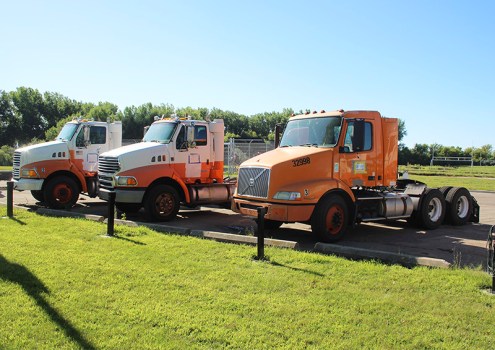 Trucks not being used sit in a lot close to the driving lot. Alex Guerrero/Albert Lea Tribune 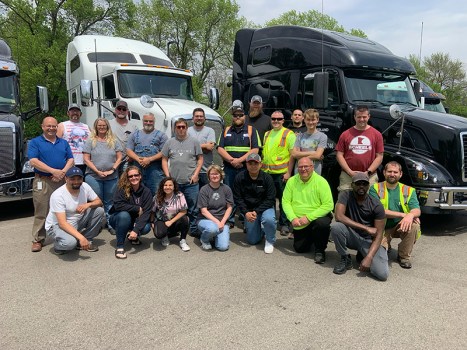 The new driving field for Riverland Community College’s truck driver program has been around since 2020. According to Jonathan Rymer, lead instructor and director of the program, any vehicle that weighs 26,001 pounds or more requires a commercial driver’s license.

“We teach students all varieties of commercial driver’s license and all types of vehicles that require them,” he said. “That would be tractor trailers with all the different kinds of trailers, that would be buses, garbage trucks, cement mixers.”

Before entering the college’s 16-week program, students should ideally have a learner’s permit for commercial driving, though he said if they did not, the program allowed time for students to get one. Currently there are 20 students in the newest class, which is a typical class size, according to Rymer.

“We generally have about that as far as an enrollment,” he said. “We’ve had a few peaks and valleys, but for the most part it’s been somewhere in that area.”

Once students have the permit, they’re allowed to drive with instructors.

“The training is really short, and it’s really not that expensive to do it,” he said.

After spending some time on campus at what Rymer referred to as the “range,” learning the basics of commercial driving, students and instructors will hit the roads around the area. He said that typically happens around the third week of the program.

“We frequent I-90 initially, and then we like to go down some two-lane highways, and then we have little test routes that we use around town,” he said.

Typically, he sees students come from around a 100-mile radius, either south of the metro, in northern Iowa, as far northwest as New Ulm and east as Caledonia.

He also said as it currently stood the trucking industry was short thousands of drivers, and the nation was short over 80,000 tractor-trailer drivers across the country.

Finding faculty to teach was a challenge, he said. At the moment, he was the only full-time instructor, though he had lab assistants. Lab assistants were generally people he already had in previous classes and who had enough experience to qualify as an instructor and had the time to help on a part-time basis. Ideally, he would like to have a night program as well, but admitted that to do that he needed more instructors.

Currently there are fall and spring classes.

Phillip Milks, a student from Adams, decided to enroll to “try something new” after he spent 4 1/2 years in retail.

“I just wanted to try something where I’m out on the road and enjoy my day basically,” he said.

Milks also admitted it was a career he considered while in high school, but didn’t consider it as a serious career option.

“As I got older, a little more wiser you could say, I decided I wanted to try a different career,” he said.

And while he admitted he had a lot to learn, he described his first weeks in the program as good, especially now that he’s on the road.

Lah Ser thought the program would allow him to see the beauty of each state he drove through, and believed as a truck driver you were helping the community.

Initially he did not consider a profession he thought was potentially dangerous.

Ser spent most of his life in Idaho, but after moving to Minnesota he decided to become a driver.

So far, he said he liked everything about the program.

He also encouraged anyone considering a trucking career to “go for it.”

For anyone interested in enrolling, they should visit riverland.edu, click on “admissions” and schedule an appointment. For those interested in teaching, Rymer suggested contacting Riverland’s Human Resource department.

“Ideally they should have a resume, and they need to have experience with the type of vehicle that they’re training on,” he said. “We like to see that they have five years of experience in order for us to be able to credential them.”