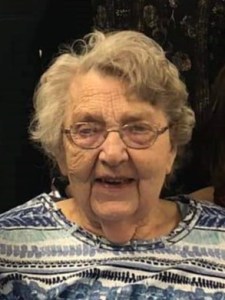 She graduated from Northwood High School in 1950. Carlyle and Carla were married February 14, 1954. It was the happiest day of her life. They lived on the Norville Nelson Farm where four of their children were born. In March of 1959 they purchased a farm in Cambridge, Minnesota. Three more children were born, and this became their home place for twenty-nine years. We were known as “The C. Trytten’s”, all nine family members first name starts the letter “C.”

Carla was a devoted farmer’s wife and mother with always room for one more at the table. She was known for a large garden and homemade baked goods. Carla enjoyed giving to others and spending time with family and friends. She went to work at the Cambridge Health Care Center and loved her job and coworkers. She was active in Isanti County 4-H, Grandy Good Cheer Guild, Border Belle’s Homemakers, and volunteered yearly to make lefsa for residents at CHCC.

In 1988 they moved to a farm south of Burke, SD, and in 1999 moved into Gregory where they lived until she entered the Rosebud County Care Center in March of 2022.