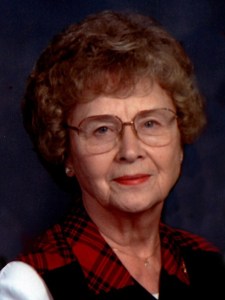 Born on December 1, 1931, in Scarville, IA, she was the fifth child born to Thom and Hattie (Olson) Trostheim. As a young girl, Clarice was baptized and confirmed at Bethel Lutheran Church in Vinje, IA. On October 8, 1950, she was united in marriage to the love of her life, LaVerne Olson at the Little Brown Church in Nashua, IA. Together they were blessed with one child, their son, who they lost as an infant. Baby Boy Olson was their little angel.

Clarice started to work for Stanhome, Inc. in 1953, this became her lifelong career. During this time, she accepted many promotions which led to relocations. Clarice and LaVerne had the opportunity to live in Iowa, Minnesota, and Illinois. In the late 1980’s, the pair moved to Clarks Grove to be closer to her sister, Ann’s, family.

In addition to her parents, Thom and Hattie Trostheim, and her infant son, she was preceded in death by her husband, LaVerne Olson; parents-in-law, Clarence and Gena Olson; brothers and sisters-in-law, Elmer and his wife, Harriet, Gilman and his wife, Burnette; sister, Ann; brothers-in-law, Roger Anderson, Kenneth Christenson, Art Cornell, George Young; niece Sharon Pasquale; and niece-in-law, Sharon Anderson.

A funeral service will be held at 12:00PM on Wednesday, September 7, 2022, at Bonnerup Funeral & Cremation Services, in Albert Lea. The family will receive friends at a viewing to be held one hour prior to the service. Burial will be held in the Central Freeborn Cemetery. The service for Clarice will be livestreamed and can be viewed by visiting: https://www.bonnerupfuneralservice.com/obituary/Clarice-Olson

Memorial contributions may be made to the Center Evangelical Lutheran Church, 19266 440th St, Leland, IA 50453.