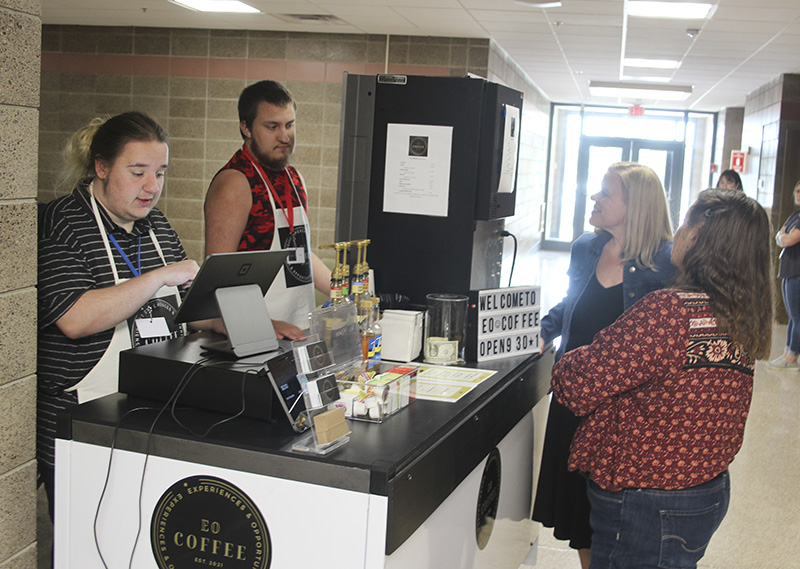 It’s not uncommon to see a coffee machine at work. Those who work at hospitals, airports, retail stores or other large spaces may even have access to a coffee shop without leaving the building. Most colleges and universities have at least one Starbucks or Caribou Coffee on campus.

According to Erin Gustafson, work-base working coordinator at Albert Lea Area Schools, the coffee cart actually started right before the holiday break last year with a soft-opening, and it opened full-time for the spring semester.

“We are able to make lattes and cappuccinos and mochas as well as brewed coffee,” Gustafson said. “We’re able to specialize it with syrups and whatnot.”

She wanted to open the stand at the college because she felt it was a good project for students in the transitions program to be able to build their skills, including hygiene, learning routines, following directions, food safety, greeting customers and customer service.

In fact, she said the entire program was designed to help students with their transition skills and to help them prepare for work and live as independently as possible.

“It was a building they were comfortable with, with staff they were familiar with, so that they can practice their soft skills that way,” she said. “Once we realized that our students are ready for the next step, we said ‘What does that next step look like?’”

And that’s where the idea for the coffee cart came from. And after applying for a grant, they were selected.

Gustafson felt coffee was a good idea because “everybody loves coffee,” and said the product was easy to sell and students had experience selling coffee from operating a coffee cart at Brookside Education Center that served to staff. According to Gustafson, the cart at Brookside served coffee, pre-made cappuccinos and hot chocolate only. It has been in operation for several years.

Besides the two carts, students also sell items at the high school.

“We have felt nothing but warmth and love from the people at Riverland,” she said. “Everybody here has been so thankful that we’re here, and they’ve been so kind to us and we’re so grateful that they’ve been willing to work with us on this partnership.”

So far, she said the program has received good reception from both staff and students, but admitted the licensing process was a learning experience (they are licensed by the state). Gustafson pointed out that like every business, COVID played a role in how the cart was operated.

Every one of the 18 employees at the cart is a student based off a program at Brookside Education Center, where they’ll start their day just after 8 a.m.

“Their classroom is at Brookside and then they come out here and work just depending on … their schedule,” she said.

“It taught me customer service, how to interact with other people and money skills that I needed,” he said.

Kelley volunteered for the program with the hope of learning to be more responsible, which would allow him to move out of his current house.

His favorite part of the experience are the friendships he’s made, and he admitted the whole experience was fun.

Joshua Horejsi makes the coffee, though he admitted he doesn’t drink it himself. Before the program, he had never worked a four-hour shift before.

“I transport them, and then we open it up,” she said.

Like Gustafson, her biggest goal was for students to gain new job skills.

According to Gustafson, “EO” in EO Coffee stands for Experiences and Opportunities. The cart at Riverland is open from 9:30 a.m. to 1 p.m. Monday through Thursday and is next to the cafeteria and Skylight Room and is available to anyone.

“I’ve always known that we have phenomenal students who just have skills that are just fantastic, but the kids have blown my expectations out of the water,” Gustafson said. “They have just done so well at this, and I’m so proud of them and the staff that work with them.

“This has gone so well, and it exceeded any and all expectations that I had of what this project could be, and I’m so proud and thankful that we have this opportunity for the kids to do this.”