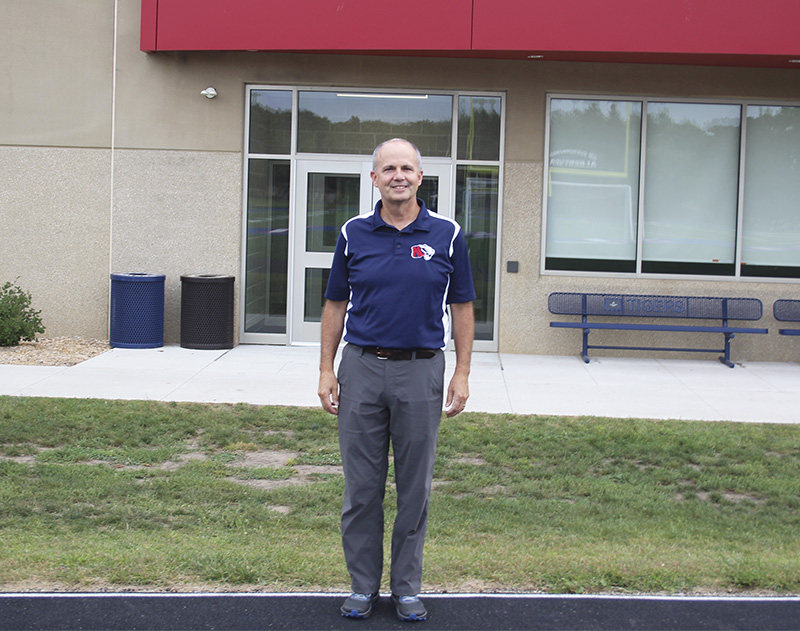 The 2022-23 school year may have just started, but Chris Chalmers saw the moment as the time to retire.

Chalmers, executive director of Community Education for Albert Lea Area Schools, had his last day Friday after 33 years in the district.

Reflecting on his experience, he said he was fortunate to work with the people he did and had opportunities to grow in his profession.

He described his experience within the district as encompassing three different phases: teacher-coach, assistant principal and Community Education director.

His favorite experiences included helping people develop self-confidence, whether in the classroom or on the field, and getting them to engage in lifelong learning.

“I think my best memories are just always making the programs that I’ve been a part of and the classrooms and stuff better,” he said. “We’ve always had good programs — take good programs and make them better, and that’s what I’ve always tried to do.”

On the other end of the spectrum, he acknowledged his first year teaching was his most difficult experience.

“I was quite young-looking when I first started teaching and there weren’t a lot of young teachers at the high school,” he said. “That was a steep learning curve for me.”

During that year, he taught ninth-, 10th- and 11th-grade classes and 150 students. He was also responsible for opening the weight room before school and coaching after school.

“There were long, intense days, and I was still learning how to become an English teacher,” he said. “So put all of that together, I wanted to give them good experiences, so … it was just really demanding.”

He also admitted the experience helped lay the foundation of being a lifelong educator.

Over the years, he came to rely on a phrase he posted in his first classroom: “This too shall pass.” He also learned to be grateful for each and every day.

“That’s so true, that the tough times don’t last forever, but neither do the good times,” he said. “I think the thing that I’ve learned the most is to be present now and enjoy each day, each moment that I have and just do the best that I can each and every day because this too shall pass.”

He also didn’t have any regrets over his time in the district, though he admitted it wasn’t always perfect.

But he liked to view those difficult times as learning opportunities.

His greatest accomplishment was the establishment of the boathouse in 2010, a project he spearheaded and physically helped to build.

“That was all built through community donations and volunteers, and in the last 11 years over 23,000 people have checked out boats from us and gone kayaking, canoeing, stand-up paddle boarding,” he said. “To see young kids, fifth, sixth graders for the first time get into the lake — they might be a little bit afraid … and then having it hard to get them off the water, to see people overcome their fears and to be in nature, that’s special for me.”

He was also particularly proud of his time coaching football when he got 60 juniors and seniors participating and being successful.

“Then I became the Community Education director 15 years ago, and in that I also was the activities director for a couple years,” he said.

During his time in the district, he had taught a variety of classes.

Chalmers grew up in Red Wing and said he was fortunate to land a position in the Albert Lea district and the Big 9 Conference due to a scarcity of teacher openings in 1989.

“I wasn’t familiar with Albert Lea, I had never been to Albert Lea, but I knew the Big 9 Conference,” he said. “This was the kind of community that I wanted to live in.”

His father was a teacher and coach in the Red Wing School District, and after Chalmers took over as football coach in 1992, the two became the first father-son head coaches duo in the conference, though not at the same time.

Prior to his time in the district, he played football at St. John’s University, and played professionally for a year in London with the Heathrow Jets. There, he had the opportunity to travel and experience different cultures.

“It was a great time and I enjoyed it,” he said.

He and his wife have three sons, and said the area was a great place to raise them.

“It gave them a lot of opportunities to be involved and engaged, and so it’s just been a good fit for our family,” he said.

Having those different opportunities were important for him, and he encouraged everyone to take advantage of them.

“That’s what I’m looking forward to in this next stage of my life,” he said. “I don’t know if retirement is the word that I’m thinking of, I think it’s more of an evolution that this is just another chapter in Chris Chalmers’ life, and we’ll see what it brings. I really don’t know what the next chapter is going to bring.”

John Double, the associate principal of the district’s online academy, will take over for Chalmers as the district’s executive director of Community Education.

Chalmers encouraged him to keep doing what he was doing by engaging the community and committing to lifelong learning.

To his co-workers, he said he was fortunate to be surrounded by what he described as a great team.

“Superintendent [Ron] Wagner is all about community, and I think our district is set great for the school district and community to be working together for all of our youth.”

For students, staff and administration throughout the district, he hoped people continued to come together as a community.

“We’re going to achieve a lot more as a community if we work together instead of against each other,” he said.

And to Albert Lea, he thanked everyone for the opportunities he and his family were given.

Chalmers immediate plans include going to Montana soon to visit a son in college.