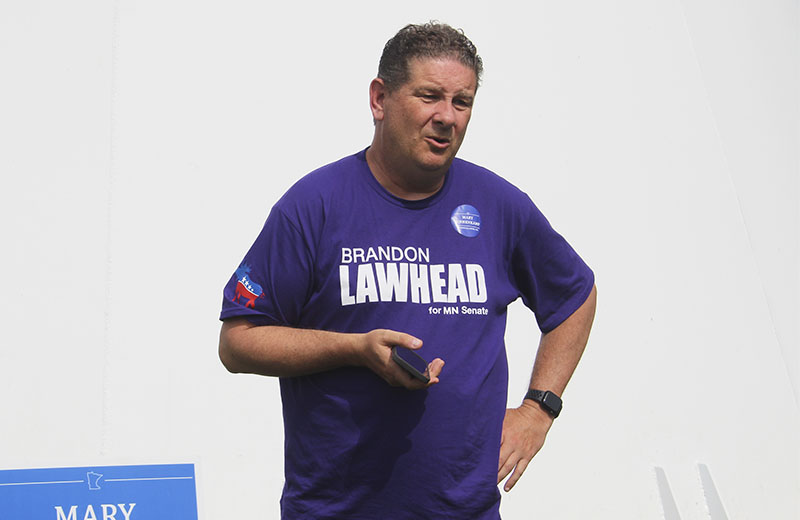 Brandon Lawhad, who is running for state Senate District 23, speaks during a rally Saturday in Ellendale. Alex Guerrero/Albert Lea Tribune

ELLENDALE — Less than a dozen people were on hand in Ellendale Saturday as part of an early voting campaign organized by DFL candidates Mary Hinnenkamp and Brandon Lawhead during an early-voting rally Saturday afternoon at the water tower in Ellendale.

Hinnenkamp said she has been door-knocking a lot, and so far, she said she had visited over 12,000 doors.

Hinnenkamp said what she’s learned is that people want good public education and heard about the pandemic and what it did, saying it left students behind in the classroom.

“We really need to get help in the schools,” she said. “The Minnesota House passes (a) great bill. We could have the kids in the schools without raising property taxes, which is a really good idea.”

She said funding for roads and bridges, which she said were supposed to be paid for by state funding, didn’t happen in the last legislative session. She noted cities were counting on money for waste treatment.

Hinnenkamp also said she’d work for working families, who were worried about having living wages as prices went up. She said they also wanted access to good health insurance and other things that would help them to thrive as a family.

“Just as communities want things that are going to help them to thrive, families want to make sure that their kids will do well and that they will thrive,” she said.

She also heard from seniors who wanted property taxes to stay the same and who talked about health care, particularly the cost of prescription drug prices. Seniors in nursing facilities and people working with them said Medicaid reimbursement needed to be reset due to nursing homes and assisted living facilities being short-staffed.

Lawhead said money was there for education and that Gov. Tim Walz was willing to help.

“This area is their baby,” he said. “It’s very special to them because this was his congressional district.”

Lawhead said the current representatives were holding Walz back and that he would do something.

“They’ve got the money,” he said. “They’re ready to go, and they’re saying “Nope, we don’t want the money to go to you down in southern Minnesota.’

“These are our own people. Our own representatives are leaving money on the table.”

Lawhead said Gene Dornick, his opponent in the race for Minnesota Senate District 23, wanted to criminalize abortion for rape and incest.

“My opponent believes that this is murder,” he said, and added that the current representatives were going against southern Minnesota values.

He also said democracy was on the line in the ballot.

“We thought we were fighting the Cold War with the Soviets and they were a thread to our democracy,” he said. “What we’re seeing is that our biggest threat is from within, from radicals, true radicals.”

Lawhead wanted politics to return to “vigorous debate” between right and wrong, not who was  good and bad.

“A healthy debate is what democracy in our system is all about,” he said. “They don’t want to do that. It’s their way or no way.”

Dennis Petersen drove all the way from Alden to attend the rally in support of the entire DFL, and particularly the Supreme Court’s position on human rights..

“The Supreme Court’s taken away rights of lots of people,” he said.

He was also concerned the court could “go after” gay marriage.

Beverly Noland, who lives in Hayward, attended because she wanted to spread the word about voting.

“We can start voting actually this coming Friday and I think it’s important that people know that,” she said.

Her husband, Jerry, said he thought democracy was at risk.

“We need to elect people that respect individual rights and individual freedoms to vote and for health purposes,” he said.

Following their speeches, Hanson was available to help people register for voting.

People can go to mnvotes.org to find voter registration and to find where they should  vote.

“Vote early and send us to St. Paul,” Hinnenkamp said.

Following speeches by Hinnenkamp and Lawhead, Everett Bradley played the drums. Bradley, currently on tour with Bon Jovi, has performed with Bruce Springsteen and the E Street Band and for former President Barack Obama. He went on the tour after meeting with Gov. Tim Walz and U.S. Sen. Tina Smith.

Hinnenkamp and Lawhead had scheduled visits throughout the area Saturday afternoon to spread the message about early voting. Following their stop in Ellendale, the two were scheduled to visit New Richland, Wells and Albert Lea.