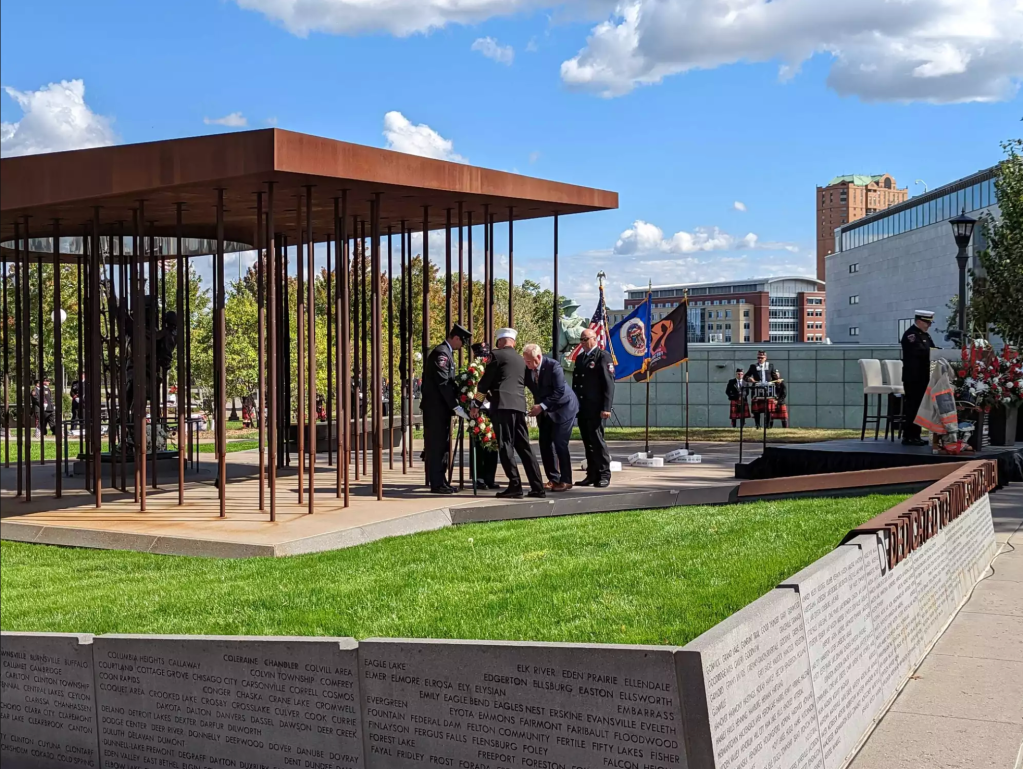 Gov. Tim Walz helps place a wreath at the Minnesota Fallen Firefighter Memorial in St. Paul on Sunday. Eleven new names were added to the memorial this year. Jon Collins/MPR

Eleven columns representing firefighters who died in the line of duty were added to the Minnesota Fallen Firefighter Memorial at a ceremony Sunday afternoon in St. Paul.

Located near the Minnesota State Capitol, the memorial honors the 241 Minnesota firefighters who’ve died on the job since 1881.

Gov. Tim Walz told the crowd that the entire state owes a debt of gratitude to firefighters and their families.

“It is a true gift to be able to live in communities of safety and security, and knowing that if crisis arises, there are professionals who will be there at their beck and call,” Walz said.

The eleven names added to the memorial include firefighters from as long ago as 1914, including Elmer Thompson and Herbert Farman of Dawson, Minn.

Department of Public Safety Commissioner John Harrington said his team has made it a priority to visit the families of fallen firefighters in person.

“We recognize that firefighting puts you in a place to do much good. And it tests every fiber of your being,” Harrington said. “When the instinct for survival that we all have is to run away, the firefighter, like our heroes, runs towards the flame, and runs toward danger.”

The event organized by the Minnesota Fire Service Foundation is held every year on the last Sunday in September. Firefighters and their families gathered at the memorial watched Sunday as a bell tolled to signal each firefighter’s final call.

Julie Paidar, whose firefighter husband died of cancer in 2020, told the crowd that it’s impossible to describe how it feels to lose a loved one.

“We all have memories of our firefighter heading out that door during the middle of the night to catch a call or leaving in the morning to head off to their shift,” Paidar said. “Our firefighters’ unwavering dedication to their calling, to their communities and to their families is what I see in the memorial.”