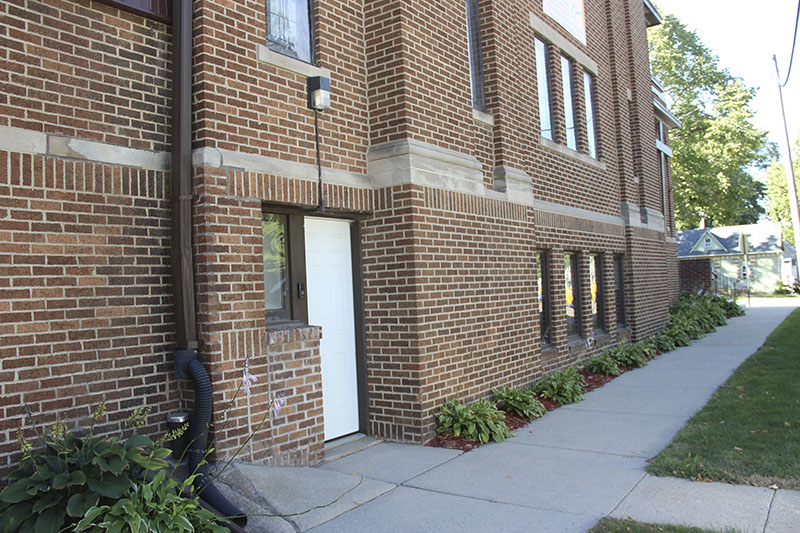 The naloxone access point at Grace Christian Church in Albert Lea will be open from 1 to 5 p.m. on Fridays starting this week for anyone in the community. People can enter through the white door on the side of the church on Euclid Avenue. Sarah Stultz/Albert Lea Tribune

Site to have naloxone kits, fentanyl test strips available to help in fight against lethal overdoses

In an effort to prevent further overdose deaths in the community after having five overdoses — including two deaths — in a little over a month, a new effort has started in Albert Lea designating Grace Christian Church in Albert Lea as a naloxone access point.

A team of local leaders that formed to bring the service to the community gave a presentation Wednesday about what the access point entails and issues tied to drug use in the area.

As an access point, a group of volunteers will provide naloxone kits to people who come into the church during designated times, as well as fentanyl test strips. Future efforts will be planned regarding additional naloxone education and intervention.

Naloxone is a medication approved by the Federal Drug Administration to reverse an opioid overdose in as little as two to five minutes. While the drug is available in an intranasal spray, at the Grace Christian site intramuscular injections will be given out.

The Revs. George and Jill Marin of Grace Christian Church, who have also served in Fountain Centers for 25 years, participated in the presentation with licensed alcohol and drug counselors Lee Zuniga and Kay Drenth-Johannsen. The four are part of a team that formed that includes other community leaders and licensed alcohol and drug counselors, along with the mother of 16-year-old Manny Chavez, an Albert Lea student who died from an overdose in late July.

Jill Marin has a master’s degree in mental health counseling, is a nationally certified counselor and is also working on her doctorate in psychology. Zuniga, a former licensed alcohol and drug counselor at Fountain Centers, more recently started HealthFinders Collaborative in Faribault. Drenth-Johannsen is a licensed drug and alcohol counselor who previously worked at Fountain Centers and more recently has worked at Independent Management Services, helping start a location in Albert Lea.

Zuniga said the naloxone access point, at 501 W. College St., will open from 1 to 5 p.m. Friday and will be open every Friday after that during the same hours. Anyone can walk into the site from off the street, no questions asked.

“Expanding the awareness and availability of this medication is key to the public health response to the opioid epidemic,” Drenth-Johannsen said. “That is why we’re doing this education … and we will have some product that people can pick up if they need it and we will give you an education on how to use it.”

George Marin clarified that the purpose of the site is not to serve as a clean using site or a needle exchange.

“It is simply to try to save lives, to help communicate with people, help education and help bring intervention,” he said.

Zuniga said signs of an overdose include when a person is not able to respond to touch or voice, they have bluish lips or their breathing is not normal — they have slow or stopped breathing or are gasping for breath. In the cases of those who have died from an overdose, their breathing and heart have stopped.

Naloxone can treat overdoses from heroin, fentanyl and prescription opioid medications when given in time, but cannot reverse overdoses due to methamphetamine, cocaine, benzodiazepines or alcohol.

Drenth-Johannsen said the naloxone can help a person start breathing again. Despite the use, she said it is still important the individual be taken to the emergency room after being treated.

George Marin said presently there is no street drug that can be considered safe as most are laced with fentanyl.

“From pot to Percocet to codeine … what is being passed on the streets is straight chalk … it has street fentanyl in it, and there’s a huge difference in hospital fentanyl from street fentanyl,” he said.

He pointed out that street fentanyl the size of the tip of a ballpoint pen can be lethal.

Drenth-Johannsen estimated that over 50% of the drugs in Albert Lea right now has fentanyl in it.

At the candlelight vigil after Chavez’s death, George Marin said 75 naloxone kits were given out. Since then, he spoke with a 19-year-old in the community who told him that there had been three people whose lives were saved from the kits handed out that day.

“This is a scary topic, but this is touching every youth group in town, every school in town, and it could affect every aspect of our society. It’s an extremely important topic that we need to be speaking openly about  and offering solutions like this.”

Drenth-Johannsen said the issue is not only affecting youth in the community — it’s also affecting adults.

She said many are getting meth laced with fentanyl that they didn’t know about, and it is highly addictive.

Zuniga said in addition to handing out the kits at the access point site, the licensed alcohol and drug counselors will also provide other support and treatment referrals as needed.

The funding for the kits comes from the Steve Rummler Hope Foundation, which was set up after the death of Steve Rummler to an opioid use disorder. The foundation aims to help others who suffer from chronic pain and addiction.

The team recognized that it will take a multi-faceted approach to deal with the issue but said they hoped the new access point site could provide a tool to keep people alive until they can get to a sober place in their lives.

The naloxone access point will be named after Chavez and will be known as Manny’s Mission. Friday would have been his 17th birthday.