New band director at Alden-Conger excited for potential of students 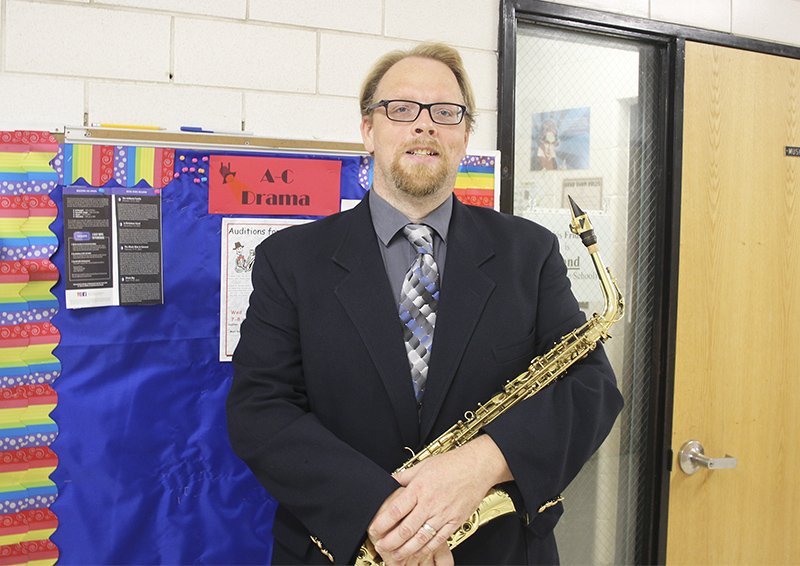 Alden-Conger High School has a new band director this year with over a decade of experience teaching band.

Nathaniel Kroshus’ appreciation for music started at an early age.

“I started playing [saxophone] in sixth grade,” he said. “The school district I was at was quite a bit larger so my middle school band that I was in in sixth grade had like 180 kids in it,” he said.

And he played saxophone throughout high school before going to college, where he originally planned to study music education, though he switched to music theory and composition.

He also spent time in Minneapolis trying to make a living as a composer, a goal he admitted was hard. So he went back to school and earned a Master’s in Education from Minnesota State University, Mankato and has been teaching ever since.

“Most of the schools I’ve worked at have been small schools,” he said.

He previously taught in Gilman, Wisconsin, where he worked for four years, and before that he worked as a band director in Hot Springs, South Dakota, where he taught for five years. He also called the district the biggest one he ever worked at.

“They had classes of 65 kids per grade, so a little bit bigger than we are here,” he said. “I enjoy the fact that in a smaller school system I get to know the kids better, I have more control over the music program and if things aren’t going the way that I don’t think they should be, the only person that can get mad is myself and I don’t actually have to talk to other people and try to convince them that my way’s better or work with them.”

But the district started going through budget cuts and combined the band position with the choir position.

“As much as I wanted to stay there, I can’t teach choir,” he said.

According to Kroshus, there are 20 high school students in band and 27 students in middle school at Alden-Conger.

“I see there’s a lot of potential for growth and development of the kids,” he said. “I’m just starting to learn what they’re good at and what they’re not good at. [Last week] was the first time I heard music groups play.”

He’s also excited to see what music the students can play.

Despite his limited time in the district, he said students seemed enthusiastic. And for him, that was exciting.

“A successful music program a lot of times comes down to the attitudes of the kids,” he said. “If they want to be a part of it then they’ll do anything they can to join the music programs to make sure that they work.”

That said, he admitted it was too early to determine what, if any, changes he plans to make and will wait until later in the year before implementing any.

He also wants to bring students to honor bands, he said.

Honor bands are bands made up of student musicians from different districts who were nominated, spend time rehearsing and then put on a performance for the public.

“It’s something that I’ve found that kids have enjoyed going to, and it’s a really good learning experience for them cause they get to be in a group that has other musicians from not just Minnesota but other neighboring states a lot of times,” he said. “They get to work with a college professor, and they tend to do things differently than the band directors that they’re used to seeing every day.”

He would also like to see students perform more solo ensembles, and described the process of learning a song independently and then putting it together was a good tool to help students plan how they would do a project and learn what needed improvement.

And he wants to bring in college professors to work with them, and noted they often like to come to high schools, meet students and work with the different musical groups.

“I knew who the previous band director was cause I met her a couple times at honor band at Winona State, the honor band that’s at Luther College,” he said. “I had gotten to know a little bit about the band program cause I talked to her.”