New principal at the helm of NRHEG elementary school

Craig Kopetzki started his new job July 1, but it wasn’t until after Labor Day that he finally met some of his constituents. 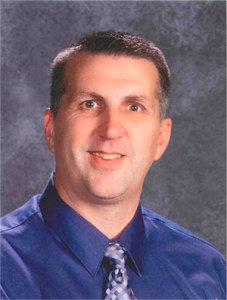 That’s because the New Richland-Hartland-Ellendale-Geneva school district didn’t start until last week. So the new elementary school principal, who officially started his new role in July, has had some time to familiarize himself with the area and staff. This is Kopetzki’s first year in the district and first year as a principal at any level. Before arriving, he served as a band director for several different districts.

“I spent the last 16 years at Mankato East High School,” he said.

Prior to that, besides teaching band he worked as a coach in junior high football.

But the native of Waldorf was used to small towns.

“I kind of wanted a change and I wanted to make a difference to more students than just my music students,” he said.

In his new role, Kopetzki will oversee about 370 students and roughly 45 staff members.

His main goal in his new role: support teachers.

“Students are always at the forefront of our mind,” he said. “Put a focus on teachers as well cause during the COVID years they were kind of the forgotten entity.”

He also talked about school safety and wants students to be able to perform to pre-COVID levels, something he said was at the forefront of his mind.

“It’s important, not only academic achievement, but making them feel good about being in school also, feeling safe, feeling good about things,” he said.

Teaching music involved administrative work, so he felt confident about his new role managing a building.

But the activity was different, and he admitted the learning curve was high.

“If I had a dollar for every time I said, ‘I don’t know what I don’t know yet,’” he said. “So sometimes it’s difficult to come up with questions cause I don’t know what to ask sometimes. So you just kind of took those two months in July and August to kind of learn a lot.”

But he said it didn’t matter where you were or the size of the district because “kids are kids.”

“Students, especially in the fall, have an energy level that can’t be matched,” he said. “That’s a huge similarity, whether it’s a high school student or elementary, it’s just good to have kids back and excited.”

He said the community was unbelievable in its support, and that community members knew the importance of education.

“They like to have new community members, they’ve been very welcoming and just really helpful,” he said.

Kopetzki said parts of his new role were similar to his old one, especially when it came to dealing with students and answering questions.

“Dealing with people, it’s universal,” he said. “I always say that we’re in a business of people, so you treat people right, have the respect for each other, it’s all similar. Education is all very similar.”

So far, his favorite part of the job was seeing the energy levels elementary students brought.

“They are so fun,” he said. “I was actually expecting to miss some of the high school conversations, but I’ve been having a lot of fun with these students and watching interactions between us and even them and their own teachers. They’re just so willing, they’re just excited about being here.”

Most importantly, he wanted to emphasize to students and families the importance of early childhood reading.

“Read to your kid, read,” he said. “Take the time and read daily. That is unbelievably important. That is basically the predictor of success later on in life.”

Along with that, he wanted students to enjoy learning.

School safety was also very important for him.

“I don’t want any school incidents that would cause our students harm,” he said. “If that’s not at the forefront of our thinking then we’re probably in the wrong business.”

In total, this will be his 26th year in education.