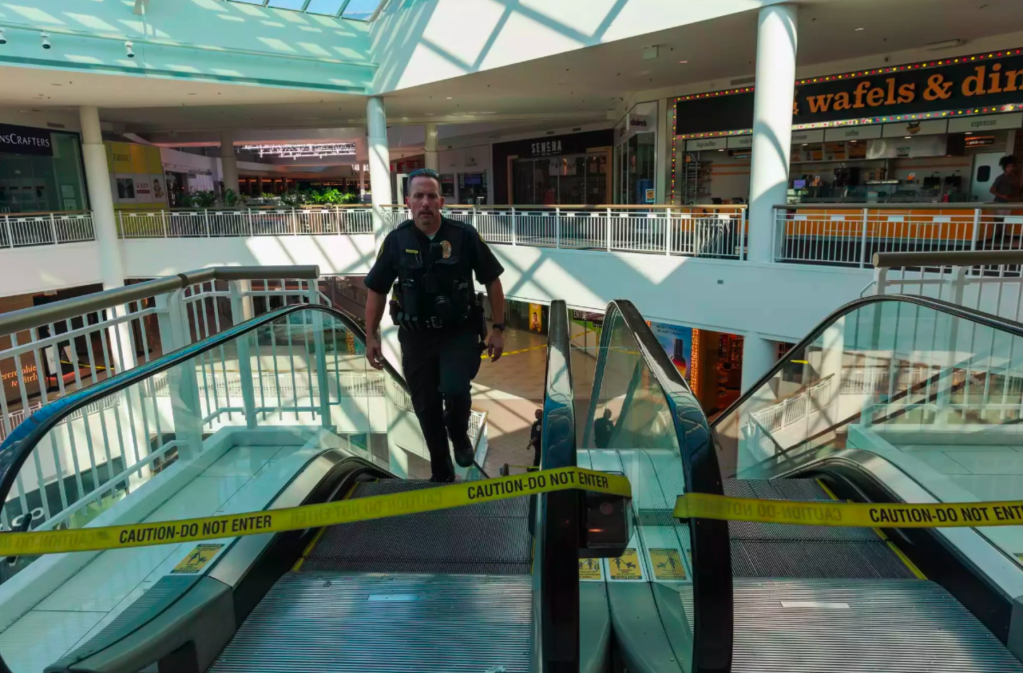 A police officer at the Mall of America after shots were fired last month. Kerem Yücel/MPR News

Most Minnesotans believe that crime in their community increased in recent years, according to the latest MPR News/Star Tribune/KARE 11 poll.

But despite that perceived increase in crime, 83 percent said they did not fear being attacked or threatened in their own neighborhood. That’s compared to about 17 percent who said they were worried about threats or attacks close to home.

The results come from a survey of 800 registered voters conducted by Mason-Dixon Polling between Sept. 12 and 14. The poll carries a plus-or-minus 3.5 percentage point margin of error.

The same survey found that crime was the second-most-important issue for Minnesota voters as the November election approaches, after the economy and jobs. But the significance of the issue, as well as the perception of crime in Minnesota, broke down differently along political lines.

Anita Gibson, a retired teacher, said she’d become worried about recent shootings at a school near her home in Richfield and at the Mall of America. And she was looking for candidates in the upcoming election who would vote to address gun violence.

“I think the answer is we need more police people out in the street, maybe more community involvement? I don’t know. I don’t know what the answer is,” Gibson said. “But there’s something that’s wrong. There’s something very wrong when people think they can do whatever they want. And to settle an argument, they have a gun in their back pocket, and they just take it out and shoot people.”

Voters also reported different levels of concern about being threatened or attacked in their neighborhood depending on their race, ethnicity and where they lived.

Twenty-six percent of those in Hennepin and Ramsey counties said they worried about being subject to crime near home, while 15 percent in northern Minnesota, 11 percent in the outer suburbs and 10 percent in southern Minnesota reported that concern.

People of color and Indigenous Minnesotans also reported higher levels of concern about threats and harassment. Twenty-seven percent of non-white respondents expressed concerns about their safety, compared to 15 percent of white voters polled.

Terry Kirby, a retiree from Bloomington, said she noticed a recent uptick in crime in her area, particularly in carjackings. And while she always tries to be alert, she has been extra cautious about possible threats when out in public.

“I mean, it’s not like I feel like every time I walk out the door, my life is in danger. Not even close,” Kirby said. “I know a lot of it has to do with how much it gets in the news. You know, the more it’s reported, even if it’s isolated events here and there, the more they report, the more it seems like it’s everywhere, right?”

Candidates up and down the ballot have cited crime as a top priority. And they’ve taken aim at opponents over positions they view as too lax.

Jeff Potts, executive director of the Minnesota Chiefs of Police Association, said elected officials and candidates should be clear about what they would do to help address concerns about crime.

“If people don’t feel safe driving down their street, if they don’t feel safe going to the local park or hanging out in their front yard for that matter, I think that should be something that the people who are interested in getting elected start talking about,” Potts said. “It’s become probably one of the biggest issues facing people in Minnesota as of late.”

Police groups asked lawmakers for additional funding to help address violent crime around the state earlier this year. But they came away with nothing after legislators in the divided House and Senate failed to reach a compromise.

Potts said his group continues to urge legislators to approve extra funding next year, or in a special legislative session.

“We cannot have another session where, because we can’t come to an agreement on everything, then nothing gets done. We have to be willing to compromise. This is a real issue,” Potts said. “It’s affecting families, unfortunately, across the state. And there’s definitely more that we can do.”