Remembering 9/11: ‘That was a pretty profound moment for everybody’ 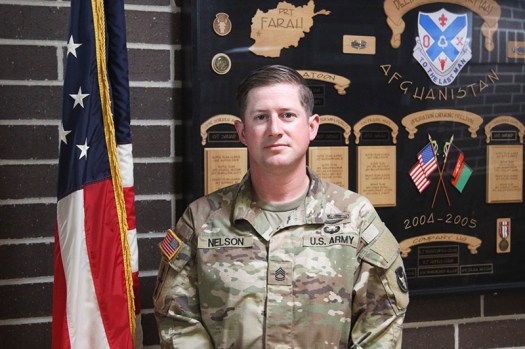 Sgt. 1st Class Trevor Nelson has served four tours overseas and has been involved with the military since enrolling at 17. Alex Guerrero/Albert Lea Tribune 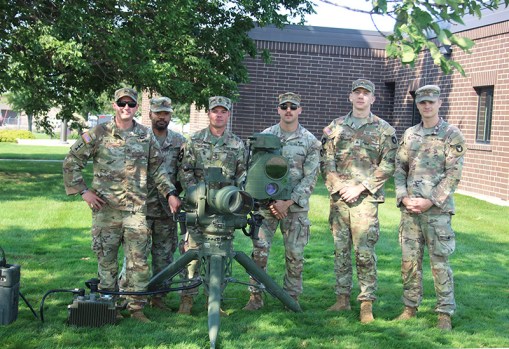 Virtually anyone from elementary school and older can remember, to some degree, where they were and what they were doing with clarity on Sept. 11, 2001.

Sgt. 1st Class Trevor Nelson, a native of Alden, was in high school.

“We were sophomores in high school study hall, not doing a whole lot, especially early in the morning,” he said. “But an announcement came on over the intercom, and [the teacher] had TVs in his classroom. It was for the time a fairly updated classroom with TVs mounted in the corners.

“He turned on the local news, whatever it was, and the first building had already been struck. And I believe we watched the second building get struck.”

Nelson can remember watching the news in the classroom for close to 30 minutes before school was canceled for the rest of the day. He saw fire emanating from the first tower, and got to see the second crash in real time.

“I was confused,” he said. “I assume that the teacher probably didn’t know what was going on either cause nobody had seen anything yet.”

He also remembered questioning how it was possible for someone to crash a plane into such a pronounced building.

As he continued watching and it became clear the crash was not accidental, Nelson — who was considering enlisting — felt a sense of patriotism and believed there would be a need for service members, especially seeing thousands of people die that day.

He also believed he would have joined the National Guard, but couldn’t say for certain he would have without the events of that day.

“That was a pretty profound moment for everybody, our country even,” he said. Nelson did not have family in New York and had no connections to anyone either working at one of the towers or in either plane.

By joining the National Guard, Nelson never expected to go overseas. But he has served four tours.

He was deployed for his first tour, what he described as a long tour, in October 2005 and reached Kuwait in 2006. He later flew into Iraq, serving for 16 months. The entire deployment was 22 months.

“During the surge of Baghdad, that was one of the pushes of the Bush administration to try to help end the war sooner, was to surge soldiers to Baghdad,” he said. “The soldiers that were to replace us out west … were redirected and sent to Baghdad. So now we had no replacements.”

Making matters more frustrating at the time, his family knew about the extended service before he did.

His second tour, from 2009-10, with the Wisconsin National Guard, took him to Afghanistan. Or at least he thought it did.

“Turns out we were going to Baghdad,” he said.

During that tour, he said they were responsible for high detainees, where he would take prisoners to and from court and prison.

“That one was a lot less hostile, that deployment,” he said. “Baghdad was a lot more calm.”

His third tour was in Kuwait and was during the drawdown of Iraq.

“We were there to assist in any efforts needed for the withdrawal of Iraq, and the complete withdrawal happened in about seven days,” he said.

Nelson said the withdrawal went out without any problems for the most part.

His fourth tour was in Djibouti, Africa, which is just across the Red Sea from Yemen.

“We were there as security force for the naval base in Djibouti,” he said.

All together, he was deployed in four missions for around five years.

During his deployments, he emphasized teamwork was important, but also admitted “most” of what he learned was through the military.

“Nothing gets done by an individual,” he said.

Having a strong support system was important as well.

“We had a very high divorce rate among our soldiers, I think it was around 30%,” he said. “Then when we got extended it went to 60%.

Being 20, 21 years old and seeing all these guys senior to me, 25, 26 … that was a very interesting thing to go through and see them go through as well,” he said. “Their attitudes would change, too, either for the better or for worse.”

Nelson first enrolled at 17 for his basic training, then returned to complete his senior year. But his first exposure to the Guard was in St. Peter following tornadoes in 1998.

“I was a Boy Scout, and we went over to help clean up the tornado damage,” he said. “… They were driving around in their Humvee and their (Battle Dress Uniforms), and I thought that was the coolest thing. They were doing the exact same thing we were doing as Boy Scouts.”