You’ll recognize here a typical Midwestern family. The stakes are just as domestic and familiar as those of any middle-class, middle-aged couple with their adult children and eccentric neighbors. In “The Big Five-Oh” by Brian Mitchell, there’s (almost) nothing too shocking, nothing here that’s going to give you a heart-attack. But under the direction of Rory Mattson, Albert Lea Community Theatre’s production tickles like all the best parts of a family reunion. Metaphorically speaking, of course. It should be noted that Mattson was assisted by two up-and-coming directors in ACT: Christy Fuller and Risha Lilienthal. The trio collaborated to craft a comedy with as many different sides as a real family. 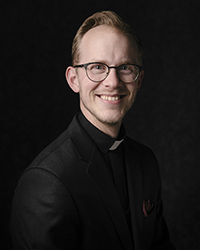 Watching Andrew Anderson surge into the homey living room as sociology professor George Thomas, every buffoonish sitcom dad combines into one. The love he has for his family is buried underneath a loud, large, lecture-prone figure. Anderson fills the room — the patriarch and he knows it — except for the necessary grounding provided by his wife, Marie, played by Dawn Friday. This was a marriage built to last. Friday crafts for us a Mrs. Thomas who is quirky and fluid. Because of her subtlety, you might miss it as she seamlessly shifts personas from wife to mother to hostess to woman. Friday is someone to watch, especially as this is her debut in ACT.

This production has a few new faces besides, including Kaitlyn Hanna, who stalks in as the young student Sara Donavan. Her motives are in question. Her presence could be a threat. Behind the mystery, though, is a genuine soul that grafts quickly into the heart of the family.

The Thomas family is rounded out by son Eric (Ethan Eriksmoen) and daughter Julie (Michelle Supalla). Eriksmoen bubbles out as the disappointing adult son who is a doofus with a hidden intelligence. No one is merely two-dimensional, though, and through some masterful facial expressions, Eriksmoen embodies ignorance, joy, sadness, fear and more. All he really wants, though, is a corpse-shift. I mean a courtship. Meanwhile, Supalla is magnetic as the bright yet mature (but not too mature) daughter who is exasperated by her infuriating family because she loves them and needs them, and because she can be just as infuriating as the rest.

Including the student Sara Donavan, the Thomas family endures a round-robin of disruptive dinner guests, with oddball neighbor-lady Kathy Walters (Kris Bartley) and Julie’s new fiancé Douglas (Daniel Montenegro). Montenegro crashes in like a wrecking-ball, and can be credited with hastening the build from mundane family comedy to side-splitting farce. I dare you not to smile while watching him. On the other hand, Bartley is a quiet mouse who is peculiar and tragic, but I’m telling you: watch closely. The waters are troubled beneath the surface.

Things might be fine when these characters are all in the living room together. But fine isn’t in the Thomases’ vocabulary. Things will break. People will get hurt. But hopefully nobody dies.

All told, when you have a story about a man entering his “Golden Years” who loves his dog, is disappointed in the decisions of his children, relishes the long-suffering love of his wife, and aspires to make something of himself, all you can do is pull up a seat —after checking it first— and play in the toy box together. That’s what you do as a part of the family.

Michael G. Lilienthal serves as the pastor of Our Savior’s Lutheran Church in Albert Lea, and in his free time enjoys writing, reading and podcasting on the Tapestry Radio Network. He competed nationally at the Kennedy Center in Washington, D.C., for Theatre Criticism in 2011. He has also written a handful of short plays and one full-length production called “The Oak Trees Still Stand.” He lives in Albert Lea with his wife, Sarah, and their several foster children.