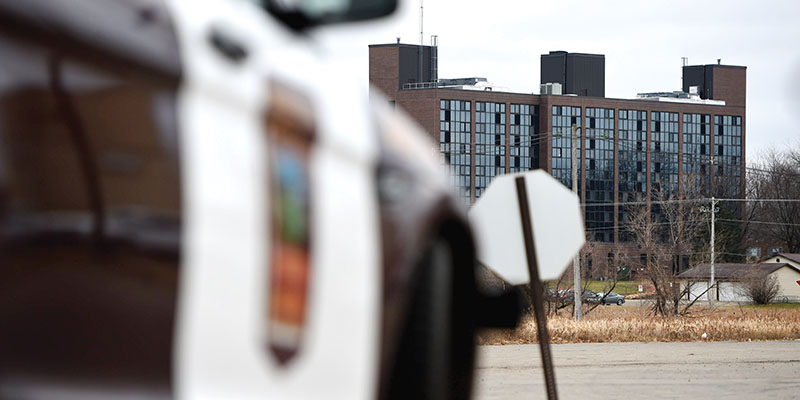 A sniper on the Minnesota State Patrol Special Response Team testified Thursday he fired the shot in November 2020 that injured the Shady Oaks shooting suspect and ultimately led to his surrender after an eight-hour standoff.

Steven Quern, a sniper team leader, said he fired one round at Devin Weiland right after he saw a rifle emerge from the window of the apartment complex and point in the direction of another team of snipers at a nearby house.

Quern said there were three sniper teams set up during portions of the eight-hour standoff at the apartment complex on November 29, 2020, and he and his partner were set up in the second floor of a townhome across the street.

Quern, whose testimony came in the trial against Weiland, said he was paged to come to Albert Lea at 3:41 a.m. while at his house in St. Cloud. Initially he was told there was a shooting and on his way down was alerted more shots had been fired.

When he arrived in town, he first responded for a briefing at Skyline Plaza, which had been set up as the command center for the incident. He was assigned to the third sniper team — referred to as Sierra 3.

He said at that time, they did not know which apartment the shooter was in though they knew the shots were from the third floor.

Quern spoke of how he and his partner selected the spot to set up their post and said they wanted a place where they could see everything, yet be concealed. He contacted the first sniper team — Sierra 1 — to find out where they were and settled on the townhomes southeast of Shady Oaks.

He said they positioned their vehicle behind a garage across the street from Shady Oaks.

They knocked on the door of one of the townhomes and found out an older man and his wife lived there. They ultimately set up in the southwest bedroom on the second floor.

He said they got to the townhome at about 7 a.m. and about a half hour later were all set up. A name and photograph of Weiland were ultimately sent over to them, and they figured out which apartment was Weiland’s by talking to the Sierra 1 team and learned that the apartment included six windows.

He said each team had two people, and one person acted as a spotter while the other person was on the rifle.

He was spotting when he and his partner got the message around 8:45 a.m. that tear gas would be deployed, and shortly before 9 a.m., all teams were checked and a final notice was given out.

The gas was deployed right at 9 a.m. or a minute later from a team in a BearCat armored vehicle that had pulled into the driveway from the north end of the building. One of the gas canisters was launched into the apartment while the other canister did not look like it went inside, Quern said.

Moments after that, the shooter let out an “impulsive, angry burst of gunfire” of the third and fourth windows of his apartment, and with each round, glass shot out of the windows. A second burst of rounds came out of the sixth window of the apartment directly at the BearCat.

Quern said he also heard some muffled shots fired inside.

He said his partner was not able to take a shot and noted during the first three rounds Weiland was too far into the room.

About five minutes later, Weiland opened the second window as if to air out the room.

Quern said leaders decided to take a break and continue evacuation of residents on the fifth and six floors.

After about five to 10 minutes, his partner decided he wanted a break on the rifle, and at that time he took over that position.

He said about 15 to 20 minutes after he was on the rifle, he saw the second window open again and could see a rifle coming out of the window that was about a foot or foot and a half out of the window. It was aimed right at where the Sierra 1 sniper team was located.

Weiland shot one round and then a second.

He said he had to estimate where Weiland’s head would be as he could not see it at the time.

Sierra 1 also came through on the radio that they had been shot at.

Quern said he went to reload his rifle and when he came back up, Weiland was not at the window anymore.

About five to 10 minutes later, Weiland reappeared at the window and could be seen holding a towel to his head and he slid the door shut. A short while later, he surrendered to authorities in the hallway of the complex.

McKenzie Anderson, forensic scientist with the Minnesota Bureau of Criminal Apprehension and a crime scene team leader, explained how her team and two others processed the crime scene after the standoff ended.

They conducted a video walk-through of the scene both outdoors and indoors that was played for jurors. She said they processed the outdoor area first as they were losing daylight and it was a harder space to secure.

She said four vehicles were taken for processing that had damage from gunfire, including two in the parking lot to the north of the building, one pickup parked on the street and the white Chrysler 300 that a man was shot in as he passed to go to work. The BearCat armored vehicle that was shot at was also processed.

Anderson said in the area below Weiland’s apartment the team collected 15 cartridge cases, three shot cups, tear gas canisters, a window screen and a shot-down drone. The cartridge cases were all for 7.62x39mm rounds.

Inside the apartment in the living room the team collected 21 cartridge cases — 20 were for 7.62x39mm rounds and one was an 8mm — along with unfired ammunition, bullet fragments and three firearms. The firearms were a Yugoslavian 8mm Mauser rifle, a Nirinco SKS rifle and a break-action shotgun.

The shotgun had an unfired shell in the gun.

A fourth firearm, a 7.62x54mm Russian military rifle, was also seized. No spent casings were found for this rifle.

In addition to the ammunition, the photos of Weiland’s apartment included trash scattered throughout, along with plates and eating utensils. A dresser or desk of sorts was seen only a few feet away from the doorway in the middle of the kitchen.

In addition to Weiland’s apartment, the team processed the apartment across the hall, which was fired on after the tear gas was deployed.

‘I really didn’t want to hurt anyone’

During cross examination of Albert Lea Sgt. Jay Crabtree, who took Weiland to the hospital after he was injured at the apartment complex, the defense showed video clips from Crabtree’s body worn camera.

Crabtree started his testimony at the end of the day prior.

One clip showed a nurse in the emergency room at Mayo Clinic Health System in Albert Lea tell Crabtree that Weiland had made a comment to the doctor about being suicidal.

Crabtree could be heard in the video responding that Weiland had made the comment to officers, too, that he was trying to die by “suicide by cop” but then gave up and surrendered.

When asked by Weiland’s lawyers who told him that, Crabtree said he could not remember who had done so.

Another clip showed Weiland laying in the bed in the ER with a doctor in the room who is telling him about the injury he received to his head. The doctor made the comment that it didn’t kill him, to which Weiland responded “I wish it would have.”

Another clip showed Weiland from the bed in the ER telling Crabtree “I really didn’t want to hurt anyone.” He asked about the man who was injured in the white Chrysler who had been shot while driving past Shady Oaks.

Weiland faces six charges, including three counts of attempted first-degree murder and three counts of second-degree assault for the three people who were injured in the incident, one of which was an Albert Lea officer who first responded to the scene.