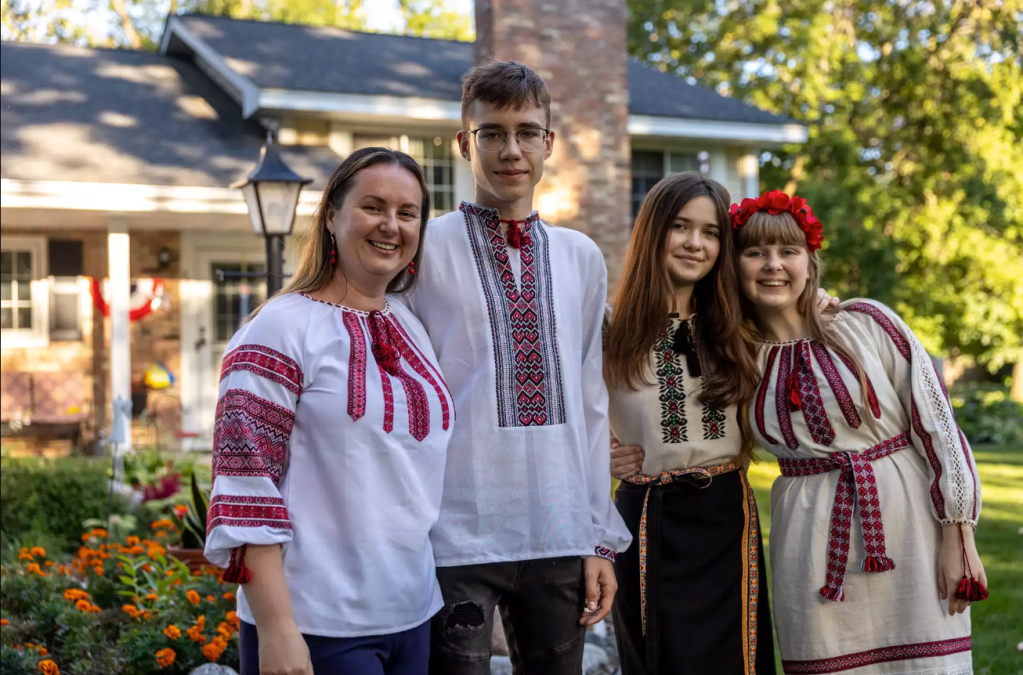 From left, Anna Prisacari, Iryna Kononenko, 14, Dima Nyzhnyk, 15, and Zlata Bileha, 15, pose for a photo in their vyshyvanka, a traditional Ukrainian embroidered shirt, in Plymouth on Tuesday. Ben Hovland/MPR News

“Exciting emotions,” their guardian Anna Prisacari said. “There have been so many emotions.”

The three students just arrived in Minnesota and met a couple of weeks ago, thanks to Prisacari’s desire to help those experiencing war hold on to their education.

“I want to make sure they feel safe here because every day was an unknown day for them,” Prisacari said.

Some of Prisacari’s own family is from Ukraine. Prisacari moved to the United States when she was 15 years old.  She went on to earn her Ph.D. and now works for Amazon.

“I know what the value of education is,” Prisacari said. “I came not speaking any English.”

Prisacari brought the teens to Minnesota using the federal program, Uniting for Ukraine, which required her to support them when they arrived. The teens’ families agreed to let Prisacari become legal guardian for the year for 15-year-olds Zlata Bileha from Odessa and Dima Nyzhnyk from Lutsk. The youngest student in the group is 14-year-old Iryna Kononenko from Mykolaiv.

The two oldest, Bileha and Nyzhnyk, are in ninth and 10th grade attending The International School of Minnesota in Eden Prairie on scholarships. The youngest, Kononenko, will go to Minnetonka Middle School West for eighth grade when school starts next week.

The students are learning English while they are attending Minnesota schools.

“It is very important and big opportunity,” Nyzhnyk said.

For all three students, it is also an opportunity to focus on school work, which has become almost impossible in Ukraine.

“You listen how rockets and bombs are just fly,” Bileha said. “It is really scary, when I just flew to America, I have nightmares.”

Nyzhnyk remembers schools being destroyed, families fleeing their homes and the noises of war.

“We have air alarms every day, the whole day,” he said. “It was very hard.”

The students stay in regular contact with their families in Ukraine, and Prisacari said she is working to get mental health resources for them as they settle into life in Minnesota.

The group has already made some happy, very Minnesotan memories, Prisacari said. They went to a Twins game, visited a friend’s cabin and went fishing. They also plan to visit the Minnesota State Fair.

“Here, I like bacon!” Kononenko shared as the group laughed. “We don’t have bacon!”

The Minnesota Department of Human Services said it is unclear how many Ukrainian refugees from the war are in the state because the federal government does not alert states when Ukrainians arrive.

However, the state estimates at least 500 Ukrainians have arrived here since March and sought state resources. The state reports there are more than 1,000 entry applications filed with the same program which brought the three Ukrainian teens to Minnesota.

Whether the students return to Ukraine after the school year depends largely on the situation there at that point, Prisacari said.

“Most parents understand school disruptions with COVID, but war is a different angle,” Prisacari said.

But home is never far from mind, Prisacari added. The students are doing their own part to give back while they are in Minnesota by planning a fundraiser to send water filters back home.

Before the interview ended, the group shared it was very important for them to wear their Ukrainian clothing for their first American interview.

“It is Vyshyvanka,” Kononenko said. “We wear it for holidays.”

“It’s very important for us, and pictures that we send for our family,” Bileha added. “We just support that we stand with Ukraine, we are always with them.”