‘We never thought in a million years this would happen’ 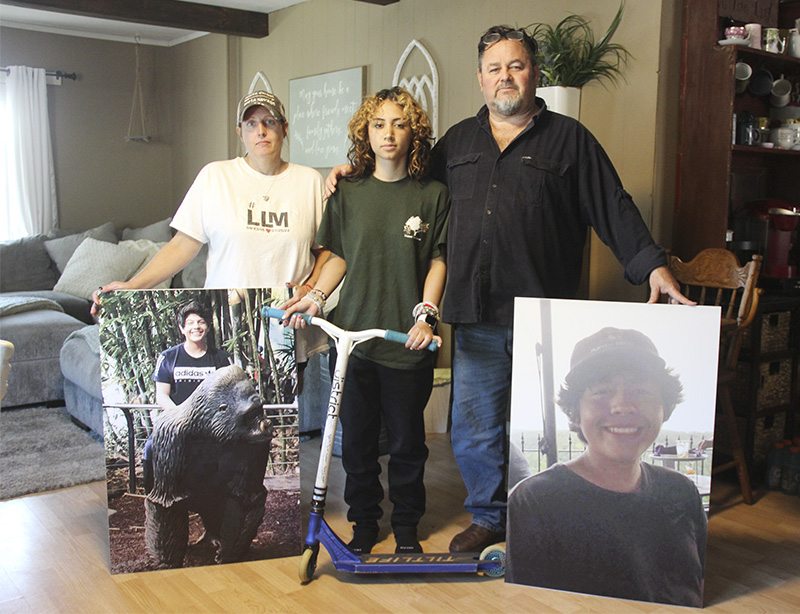 From left, Natalie Lane, Bella Chavez and Troy Chavez stand behind photos of Manny Chavez, who died July 26 after a fatal overdose. Manny was 16 and would have been a junior this year in Albert Lea. Sarah Stultz/Albert Lea Tribune

Family shares son’s story in hopes of helping others

Sixteen-year-old Manny Chavez was known as a teenager who was a friend to the friendless.

The rising Albert Lea junior had a sweet personality and was often seen scootering at the local skate park, his family said in an interview this week.

But on July 26, Manny’s life unexpectedly ended after a fatal overdose.

His father, Troy Chavez, said from what he has been told, his son took what he thought was Percocet, but the pill actually contained a lethal dose of fentanyl. He never woke up.

Now, a little more than a month since his death, his family and best friend hope to raise awareness of drug use in the community and to hopefully prevent more fatal overdoses from happening.

“We never thought in a million years this would happen,” Troy Chavez said.

The Albert Lea Police Department last week posted on its social media page that there had been four overdoses of youth between 16 and 27 in the last month, two of which were fatal.

One of those was Manny, and the investigation into his death is ongoing.

Troy Chavez said Manny was “extremely smart” and thought differently than anyone else.

He recalled an experience when his son was 9 or 10 years old and he had gone to a counselor. The counselor asked him what he would want if he could have anything in this world. After waiting 30 seconds to a minute, he told the counselor he would want world peace.

He started working at McDonald’s when he was 14 and then worked at Qdoba for a time. He had quit the job at Qdoba three months before he died, his father said.

For the last few years, Manny had lived with his mother, Robin, and that is ultimately where he died.

His father said, the night before Manny died, he had gone out and then came back home and went into his room.

“As far as we know, he used — what he probably thought was Percocet,” Troy Chavez said. “It had fentanyl in it, and it killed him. … That was the last time anyone saw him until the next day.”

He said Manny’s mother and sister Bella found him at about 1 o’clock in the afternoon. He often stayed up late into the early morning and slept in late, so they didn’t think much of it until they found him.

The family has been told by authorities he likely died around 3 o’clock in the morning, and the preliminary autopsy found THC and fentanyl in his system.

Troy Chavez said Manny had used marijuana on and off and went to treatment for his addiction to the drug from September through December 2021. His son posted on Facebook he was four months sober in January and at that time was doing pretty well.

“But what it came down to was who your friends are. Who do you hang out with?” he said.

Troy Chavez and Manny’s stepmother, Natalie Lane, said they did not know that Manny had been taking pills, though  his older siblings had heard.

Bella, 17, said she had started hearing from her brother that he was doing other drugs and sneaking out.

She said her brother had also confided in her multiple times about mental health concerns, namely depression. He had been hurt by others, but didn’t know how to talk to people, she said.

“You get so sad you don’t know what to do. You just want to get away,” she said of him turning to drugs.

‘He had so much potential’

About five years ago, 16-year-old Devin Truesdell met Manny at the skatepark, and they became friends right away, he said. They both loved scootering and would go to the park to have fun.

“He was super generous and kind,” Devin said. “He had a million-dollar smile, and he would help you before he would help himself.”

A year or two after they met, Devin said Manny started smoking marijuana.

One time, Manny asked him if he wanted to smoke with him, and he told him no, that he had seen firsthand from family members how drugs weren’t good for people.

But Devin said Manny continued smoking and hanging out with people he shouldn’t have been, and when he was 15, those friends started getting him involved in other stuff — things including Xanax, Percocet, dabs, Molly, shrooms and acid. Though he tried a lot of drugs, Devin said Manny never really drank, that he knew of.

“I warned him multiple times about it,” Devin said of the drugs. “I told him that stuff’s not good for you. I’ve seen how it changes you.”

He said despite Manny’s drug use, the two friends continued to get together regularly. They would hang out for a couple hours at a time riding their scooters at the skate park and then get some food, and then he usually would drop Manny back off.

He talked to Manny about it before he went into treatment last year and again after he got out. He warned him to not hang out with people who weren’t a good influence.

“It seemed like he was listening, but really I think he didn’t want to make me upset. I think he just sat there and listened — but it went in one ear and out the other,” Devin said.

He said it broke his heart to hear Manny had died, and when he heard the news he dropped what he was doing and went to Manny’s house. That’s when reality sunk in.

“That’s probably the last thing I would have ever wanted,” Devin said. “He had so much potential. He was so smart, and he knew deep down it could kill him — but that’s what addiction does to you.”

He said since Manny’s death in August, not much has changed. The people who would do the drugs with his friend said they were going to get sober, but they haven’t. He said he believes peer pressure is what ultimately led to his best friend’s death.

“Anyone who will sell you or do any kind of drug in front of you or near you or ask you to do a drug, they are not your real friends,” Devin said.

‘This is a problem’

Devin said he doesn’t think school officials have acknowledged that the drug use has been happening and thinks more needs to be done at the school level to help students.

He said he has encouraged the high school principal to have multiple doses of Narcan at the school in the event of an overdose in the building and not just one with the school resource officer.

“I’m just waiting for people to realize this is a problem,” he said.

Manny’s sister Bella said the amount of vaping and drugs she has seen at the high school is “insane” and talked about often seeing smoke coming from behind bathroom stalls.

“The school — they say they try, but I don’t think they try enough,” she said.

Lane said she thought there needed to be metal detectors when you go into the school and vape detectors, and Bella said she would also support regular K-9 patrols at the school.

While some have cited the high cost of these things, Lane and Bella said they think it should be a priority.

“There’s just a huge war on drugs with our teens and mental health all across this country,” Lane said.

‘One pill can kill’

The family said they have heard of several others who have experienced similar things as Manny, and they are amazed there isn’t more public coverage of what they consider to be a big issue in the community.

“There’s nobody that’s paying attention to this at all to make the community aware of what’s happening,” Troy Chavez said.

He and Lane said parents need to be cautious with their children — “better safe than sorry,” Troy Chavez said.

While parents need to be able to trust their children, the children also need to know that there are going to be consequences for their actions and follow-through from their parents.

Lane said any parents who may have any inkling that their child is experimenting with drugs should have Narcan on hand. There are also fentanyl strips that can be used to test drugs for fentanyl.

She said even though she had educated her children about drugs, talking to them until she was “blue in the face,” it didn’t prevent Manny’s death.

She said parents should sit down with their teens and tell them that while they don’t want them to experiment at all with drugs, they should also advise them that if they do so they need to always test for fentanyl. She said she has heard the strips are available at a few places in Albert Lea, including Mayo Clinic Health System. She said Youth for Christ has also talked about getting them and she thought they might be available at Walgreens.

“One pill can kill,” she said.