When trying something new, patience may be required. 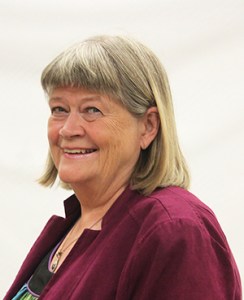 And when Julie Ackland, a family housing specialist for the Austin Housing and Redevelopment Authority, noticed no one else was running to challenge incumbent Brad Edwin for Freeborn County 1st District commissioner, she decided to throw her name into the ring.

“I just kind of waited to see if anyone else was going to run,” she said. “And then they didn’t. I think I signed up May 30, and I think the deadline was May 31.”

Ackland had considered running for political office earlier, but thought now was the right opportunity when no one at the time had decided to run against Edwin. Her interest in politics started at a young age, and she started participating back in ninth grade for extra credit.

She confessed some of the current issues bothered her, including the county’s desire to send the sheriff’s department to northern Minnesota and help patrol during the construction of a pipeline.

She also noted the mutual separation between former county Administrator Tom Jensen and the county cost the county money.

When trying something new, it also helps to have experience in a related field.

During her experiences, she wrote administrative policy for both public housing and the Section 8 program.

“I started one of the first Section 8 home ownership programs in the state of Minnesota,” she said. “And I helped other housing authorities develop these programs also.

Besides those experiences, Ackland worked for what is now Crest Services for 14 years. Crest Services provides residential services to individuals with mental and developmental disabilities, as well as people with traumatic brain injuries.

During that time, the home received an award for her work in helping clients purchase homes through a semi-independent living skills program, where she helped manage peoples’ money and medical issues.

Ackland felt one of her best attributes she could bring to the board was her skill writing policy.

“I’ve written policy for the housing authority,” she said. “I helped them develop policies in administration.”

She also has a four-year degree in city planning and administration, and that’s kind of like working for the housing authority or even a county administrator.”

She also has a master’s in counseling, a mini MBA in economic development and a mini MBA in nonprofit management. And she’s worked in Davis-Bacon enforcement, which involves federal wages.

“If you work for the federal government, I’m working for a city government but we get federal money, we get contracts and we hire people to build things … and any federal dollars coming to the housing authority for contracts I would have to oversee to make sure everyone got paid the right wage.”

Ackland described herself as a fair person, and wanted to look at situations to ensure people were treated fairly. She also felt she was economical.

“I don’t waste money, and so I think that’s very important for somebody that works for the government not to waste money and make sure that it’s being spent wisely,” she said.

If elected, her top priority would be ensuring programs were run the way they were supposed to, that people were treated fairly and money was used wisely.

But she felt what separated her from Edwin was her employment background and education.

“I have had a lot of education, and I have a master’s degree,” she said. “Another thing that separates me is I’ve farmed for 40 years, so I’ve raised hogs and sheep, chickens, cattle. And I’ve done fieldwork for 40 years.

“So I’ve raised crops, I’ve had to help decide on marketing these crops.”

And being on a farm, for her, meant dealing with large rural areas and farmers.

“You need to understand the issues related to farming,” she said.

And that, to her, is why being a county commissioner made more sense.

She also considers herself an honest ideas person who’s good at problem solving.

“If the county has financial problems or other problems, I can think of ideas for solutions,” she said.

Ackland also volunteered for a south central sustainable agriculture organization, and worked with Habitat for Humanity for several years, where she worked with the housing program.