8 school board candidates face off in forum 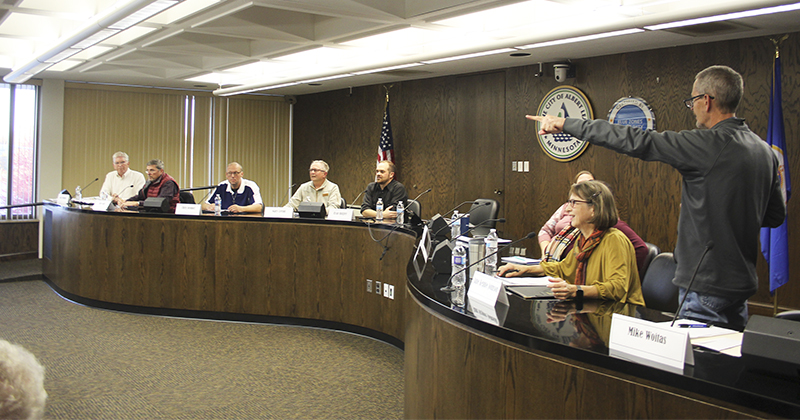 School board candidates prepare before the school board forum Tuesday night. The debate was moderated by Mike Woitas. Alex Guerrero/Albert Lea Tribune

The debate was moderated by Mike Woitas from KATE Radio and streamed on the Albert Lea-Freeborn County Chamber of Commerce Facebook page. Kaitlyn McColley, Shannon Cox and Davy Villarreal were not present.

Four spots are open on the seven-person board, with Klatt and Nelson seeking re-election. Current members Jill Marin and Dennis Dieser will not seek re-election.

In her opening statement, Kepple Johnson said selecting school board members was important because children were important.

Wolters said she decided to run because she wanted parents to have a voice.

“Here I am, out of my comfort zone but ready to jump in and serve,” she said.

Lerud wanted to see an increase in parental participation in schools when possible, and he, too, argued parents knew what was best for their children.

Klatt said his experience serving gave a unique set of skills after seeing things happen in the district.

Schindler, who recently finished working with juniors and seniors during the Discovery History Program, said he believed he had skills and abilities that were a good fit within the district.

“What I would bring to the board is just experience, and pretty vast,” he said. “I’ve coached elementary students, been a junior high social studies teacher and counselor and coach, a high school teacher, club adviser. And at the higher ed level when we came here to Albert Lea, a financial aid director, dean of students, a counselor, and have been in the classroom as recently as last spring teaching classes at Riverland Community College.”

On schools starting before Labor Day, Schindler said the idea needed to be considered, and pointed to the potential work opportunities for students over the summer. He also argued it gave families more time over the summer.

Klatt said the board did talk about it every year, but starting earlier gave students more time to prepare for the Minnesota Comprehensive Assessment tests and, as a parent, said it gave his children time to relax without stressing over finals.

“If you go back when this decision was made, really it was either their way or the highway,” Seedorf said. “Didn’t involve the community, didn’t involve parents. It was just their agenda, that that’s what they want. And that’s not fair. It should be all players involved, the community, the parents, students.”

Quigley said it was an idea he was willing to explore.

Wolters noted the start date seemed to get earlier and earlier every year, with the end date being later and later. She wanted to poll parents and staff to determine what the best solution would be.

She also offered a rebuttal to Klatt’s point, and said if a student didn’t learn material before break they wouldn’t be able to pass after the break.

“If they’re really learning the material, they should be able to pass those finals after as well,” she said.

Nelson sought a more balanced solution between what the community, educators and students needed.

“I’d be open to those discussions, but I think the intent is strong and it makes a lot of sense,” she said.

Kepple Johnson said it was frustrating that pools and parks weren’t ready when schools let out, and that she was open to discussing the dates of calendars.

Woitas asked candidates about their feelings on school safety, particularly if all school buildings were safe from unwanted guests.

Schindler said school safety should be one of the highest priorities of the school along with academic performance.

Klatt admitted the board wasn’t perfect with safety, and admitted you couldn’t just throw money at a problem in order to make it disappear. He also said safety was a question he asked consistently at board meetings, and wanted to add another school resource officer and said there was a grant for one.

Lerud wanted to see security increases in each building, and wanted people to be trained to be able to spot things that didn’t look right.

Quigley agreed that having multiple SROs were vital.

Nelson believed the district’s positive relationship with local law enforcement was used as an example by other communities. She was also a proponent of adding another SRO for the junior high.

On having parents more involved in what children were taught, Schindler said the first thing he would look at were the mechanisms already in place, including PTO organizations and perhaps broadening the number of parents who served on the curriculum committee.

Klatt urged parents who had input for school board members or school leaders to forward their concerns and inquiries to someone who was in a position to relay concerns to the proper authorities.

Lerud wanted to see parents involved with as much participation as possible.

Quigley said parents started paying attention to what their students were learning during the pandemic, and from that consternation arose. From that, he emphasized parents were the ultimate authority, but on the board’s side they needed to listen to what parents were saying in order to create a stronger community.

Wolters said it was the board’s responsibility to forward concerns to administration, while Nelson said the district was full of teachers who wanted to help if they followed a chain of command. She also said there needed to be a partnership between parents and educators.

“It has to be that way for our children to be successful,” she said.

Woitas also asked the candidates if there was something the district could do differently than previously with new Superintendent Ron Wagner.

Schindler referred to school safety, and said there needed to be formal policy for conduct violations and refer concerns to more than likely a counselor. Currently there was not a formal process for referral when students were in trouble.

Seedorf said it was important to not leave any rock unturned.

“With the new superintendent, the one thing I was really disappointed in about — and this comes from other school board members’ voices — is they were pressured into hiring him,” he said. “… You can see Mr. Wagner’s track record. You thought Funk was bad. We got to keep him in line and honest.”

Lerud wanted Wagner to listen to the board, though he admitted Wagner seemed open and willing to listen and collaborate with others for solutions.

“I’m very hopeful for the future,” he said.

He said with a new superintendent it was paramount communication stayed open and was clear.

Wolters was excited about the hire, and said he brought a fresh look to the community and district, but she also wanted to see him be open to hearing from staff, teachers and building administrators to collaborate on what was best for kids.

Nelson said when doing research on Wagner she couldn’t find anyone who said he wouldn’t be a good fit for the position and the district.

Kepple Johnson said she was energized by the district’s new leadership, and found Wagner engaging.

That said, she also urged people who had questions or concerns not to go to social media first but to talk to him or the next person.

In a prepared statement, Cox said he was hopeful to receive support from voters.

“We need more people on the school board that will listen to the needs of our community,” Cox said in the statement. “Our students are our future, and I’m dedicated to making the best of our community for them.

“If I’m elected I will be your voice as we need more involvement from our community. That starts with feeling comfortable and being involved. I will try and make it more open to the public as that is very important to me.”