Across the Pastor’s Desk: Treasure found in the clay jar

An old clay jar stands in a Bethlehem souvenir shop. You may not notice it among all the olive wood and mother-of-pearl figures set out with other souvenirs to entice you. The jar is not very big. It is just a few feet tall. And it is obviously old. But then it has been sitting in the shop for about 75 years and before that sat in a cave for another 2,000 years. 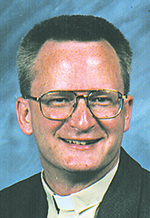 But this clay jar at one time held remarkable treasure. This clay jar held some of the first Dead Sea Scrolls to be removed from their ancient hiding place. The Dead Sea Scrolls are some of the oldest biblical documents known to exist. They date to a century before and just a few decades after Jesus walked the earth. And there are thousands of them covering almost all of the Old Testament and more. They are a window to the world in which Jesus lived.

Bethlehem is famous as the center of the discovery of the scrolls. The Bedouin boy who found them lived just a few miles east of Bethlehem. And his home is just 15 miles from the where he happened on the scrolls in a cave at Qumran on the Dead Sea shore in 1946.

Bethlehem is where the shepherd boy and his family brought the first scrolls to see if they might be worth some money.  That landed them in the souvenir shop, which lead to a priest, and word finally reached biblical scholars who identified the treasure in that clay jar.

We all know Bethlehem is famous for another treasure in a clay jar. The treasure is our Lord Jesus and the clay jar is his human form born in Bethlehem. He walked and lived among us sharing and living the word of God. He revealed himself to everyone he met and would hear him. His word brought life to those of both high and low estate. This clay jar broke, smashed against a cross. But he rose and his life and word are among us still.

The first Christians knew about clay jars. They used them for all sorts of valuables. They also knew that those clay jars could be used to hold and preserve their sacred writings. They knew as well that they themselves were fragile clay jars holding the treasure of faith in Jesus. And they put their belief in writing to preserve for all time.

“But we have this treasure in clay jars, so that it may be made clear that this extraordinary power belongs to God and does not come from us.” — 2 Corinthians 4.7

There are days when we feel broken and it may even seem that our clay jar is shattered and useless. But we know that the treasure within, the love and life of our Lord, can repair and make new. The power of God is within us and among us in the fellowship of the children of God.

And we know also that one day the clay jar of our body will reduce to dust. But we find peace and hope from the treasure within. We are assured that the treasured life of Jesus brings us life forever among the saints in light.